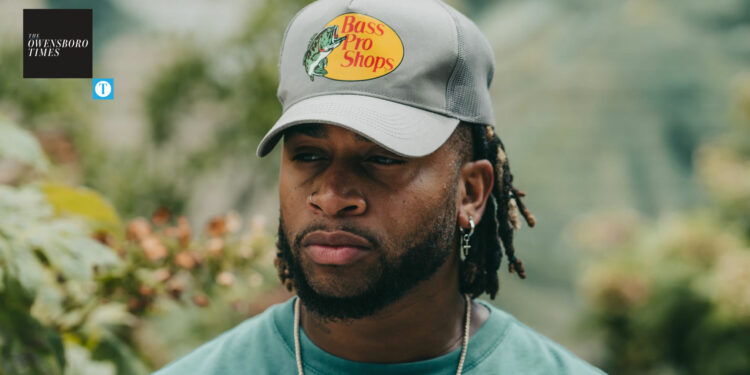 George Rose, who goes by the artist name George.Rose, understands the value of dreaming big. After moving to Owensboro — his wife’s hometown — Rose said he’s found a great place to raise a family and keep making music.

With a new album set to release this summer, Rose is excited to see where this road takes him.

“Music has been in my family for a very long time,” he said. “My parents used to be Christian rappers back in the ’80s in a group called The Church Boyz. I’m a pastor’s kid — the apple didn’t fall far from the tree.”

Growing up in a family who loved music, Rose said he spent most of his time committed to the same cause.

“I took music seriously when I was in high school. People were out partying and I was home making music,” Rose said.

“In 2013, they took me on and signed me. I was not into Christian music at the time. I got addicted to drugs heavily,” Rose said. “I knew during that time that I needed to stop.”

A phone call from Rose’s mother created the opportunity for him to make a change.

“My mom said that God told her to tell me that if I did not stop doing what I was doing, I was going to die,” Rose said. “When you get a message like that, 9 times out of 10 you know you need to change.”

At the time he received this message, Rose realized he had a lot on the line. Both his current successes and future opportunities were at stake, if he made the decision to walk away.

“I had a beat being sent to Cardi B and I could possibly be working with her,” Rose said. “I stopped doing music, I left it all behind.”

Rose and his wife became full-time staff at the children’s ministry at their church in Dallas, unsure at the time if he would return to the music industry.

“Down the road, I started doing my own thing. Once I did that, I really started to find my sound and my music as an artist,” Rose said. “God brought me back to music, but this time it was Christian hip hop.”

During the pandemic, Rose said he and his wife made the decision to move to Owensboro, which was a stark contrast to the big-city life of Dallas.

“Now, I would not go back,” he said. “Owensboro is family-oriented and I feel safe for my kids. It may seem small coming from such a big place, but it’s really nice. I love Owensboro.”

Rose has enjoyed dropping a new single every month this year, a goal he hopes to continue in 2022.

“I work with Lecrae’s label a lot. I have also been traveling to a lot of shows. I’ll be in Tampa next month and my new album will be released this summer,” Rose said.

As far as local impact, Rose looks forward to performing at Musick Studios’ showcase in May, and hopes to perform at Friday After 5 this summer.

Most importantly, Rose is proud of how far he has come, celebrating four years clean, and looks forward to the future, too.

“I want Owensboro to be my home spot,” he said. “When they see my name, George.Rose, they think Owensboro. If you can’t make an impact where you’re at, then what are you doing?”