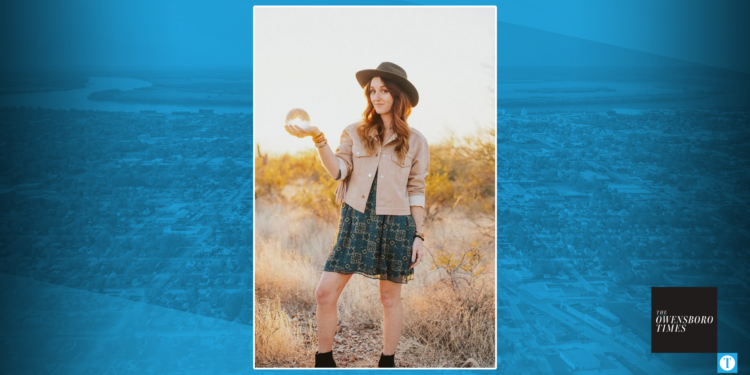 Meghann Chapman, founder of Artemis Sol Creations, did not set out to become a business owner. The Owensboro native found her passion through creating, and it eventually birthed the desire to share her products with others.

Chapman recently moved back to Kentucky after spending nearly a decade in the Charleston, South Carolina area.

“It became our second home and I miss it as much as I missed Kentucky while I was there away from family. I ended up being a stay-at-home mom,” Chapman said. “My friend opened a crystal business and it took off. When she needed help, I’d say ‘absolutely.’ I enjoyed working there so much.”

Eventually, Chapman enjoyed the artistic design of nature so much that she was able to design her own creations. Today, she describes herself as  “a backyard dwelling, wildflower growing, nature-chasing wife and mama.” Her website says her creations are “inspired by the sun, moon, and earth.”

“I love the connection to the earth and the celestial bodies. We draw so much inspiration and energy from this no matter what our beliefs are. I put them together, building a character and personality,” Chapman said.

After nearly a decade away from Owensboro, Chapman is excited to share her roots with her husband and two children. When she isn’t pouring out her creativity in the Artemis Sol studio, she’s chasing her little girls or working around their home.

Chapman is grateful for the reach of her business, sending her creations to other states from California and Nevada to South Carolina among several other parts of the country.

“People I didn’t have a personal connection with started placing orders,” Chapman said. “I love having pieces of me in other people’s homes.”

Another aspect of Artemis Sol Creations and owning a small business that Chapman enjoys is the flexibility.

“I work when it’s good for us. It goes in and around our lifestyle. I love the community building aspect — it’s my second passion,” Chapman said. “A lot of us moving back here had to do with how we were both raised around cousins and aunts and uncles. We wanted to give them the best of both worlds. To us, Charlestown was a big city. We wanted to move back to get deeper into the Owensboro community and support the small businesses here.”

As far as future plans, Chapman would love to expand a venture she recently started in her backyard —offering new moon sound baths once a week to a small group of people in the evening.

A meditation with drums, gongs, and mandolins, the sound bath can also include singing and is described as incredibly relaxing.

“This is one of the things we have been doing to find and cultivate our people. We serve mocktails — no alcohol but still something fancy to drink. We would like to eventually open up to the public,” Chapman said.