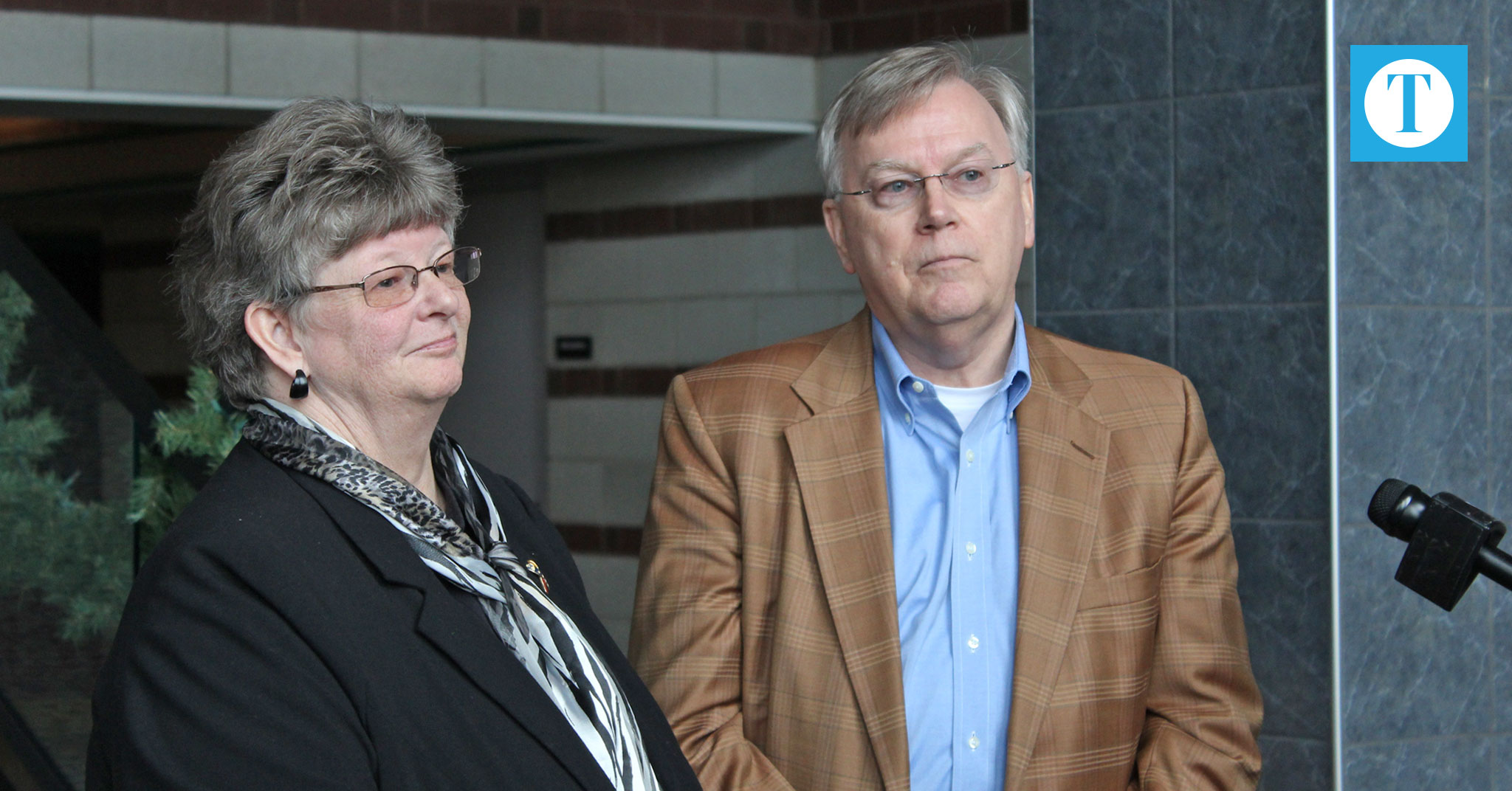 Current River ParkCenter Executive Director, Roxi Witt and RiverPark Center Board Chair Jeff Ebelhar address the media after voting down a Spectra contract in a closed board session Monday. | Photo by Owensboro Times

RiverPark Center board members voted down a contract with Spectra in a closed session meeting Monday, opting to appoint a search committee for a new executive director.

Roxi Witt, current River ParkCenter executive director, announced she will move up her retirement date from August 2020 to June 30, 2019, and assist with finding her replacement. Witt has submitted her letter of resignation with an open-ended date.

RiverPark Center Board Chair Jeff Ebelhar said the board plans to keep options open, but given the reaction from the public regarding a management company, they believe the search for a new executive director to be the best option moving forward. The board would ultimately have the final say with another vote once the committee finds a viable candidate.

The 200-page document that was voted on today proposed a three-year Spectra contract that would leave a director position, but change that title to president. The proposal outlined keeping the arts education program separate from Spectra management. But it was the hope that Spectra’s national connections would bring in performing arts groups that RiverPark Center could not secure on their own.

“Our goal was looking at how we can change some of our dark nights into an event,” said Ebelhar, who referenced over 200 nights the RiverPark Center did not host an event. ”What was pointed out to me was there are only so many entertainment dollars. We recognize we cannot have an event here every day.”

With the goal for the RiverPark Center to be as successful as it was for the first 25 years, Ebelhar said the board is looking to address the demands of a younger generation to help with a new wave of community financial support.

Ebelhar also said that donations have been decreasing with the deaths of older substantial donors.

“We haven’t been successful yet in grooming succeeding donors,” Ebelhar said.

Ebelhar said the board forecasts a deficit cash flow of $150,000 this year.

“We have the cash reserves to weather that, but we can’t weather it much longer,” Ebelhar said of the $1 million total cash reserve.

To address the financial deficit, Ebelhar said the board and RiverPark Center plan to start a fundraising campaign, asking the community to support the performing arts center.

Ebelhar said information that surfaced regarding RiverPark Center employees losing their jobs was inaccurate and that all employee and volunteer positions would remain the same going forward. When asked about the lack of transparency surrounding Monday’s vote, Ebelhar said the board was attempting to protect the RiverPark Center staff and volunteers, citing the complicated process as the basis for the board’s decision to keep discussions private.

Ebelhar told Owensboro Times the board will most likely invite the public to meet and give input on executive director candidates.

Witt, who said she is willing to stay on until a suitable replacement is found, regardless of her set retirement date, is hopeful in the new direction the board chose Monday.

“I wish we had all been in a boat rowing in the same direction and I think that’s where this process got a little bit off track, but I think we are ready to get in that boat now,” Witt said.