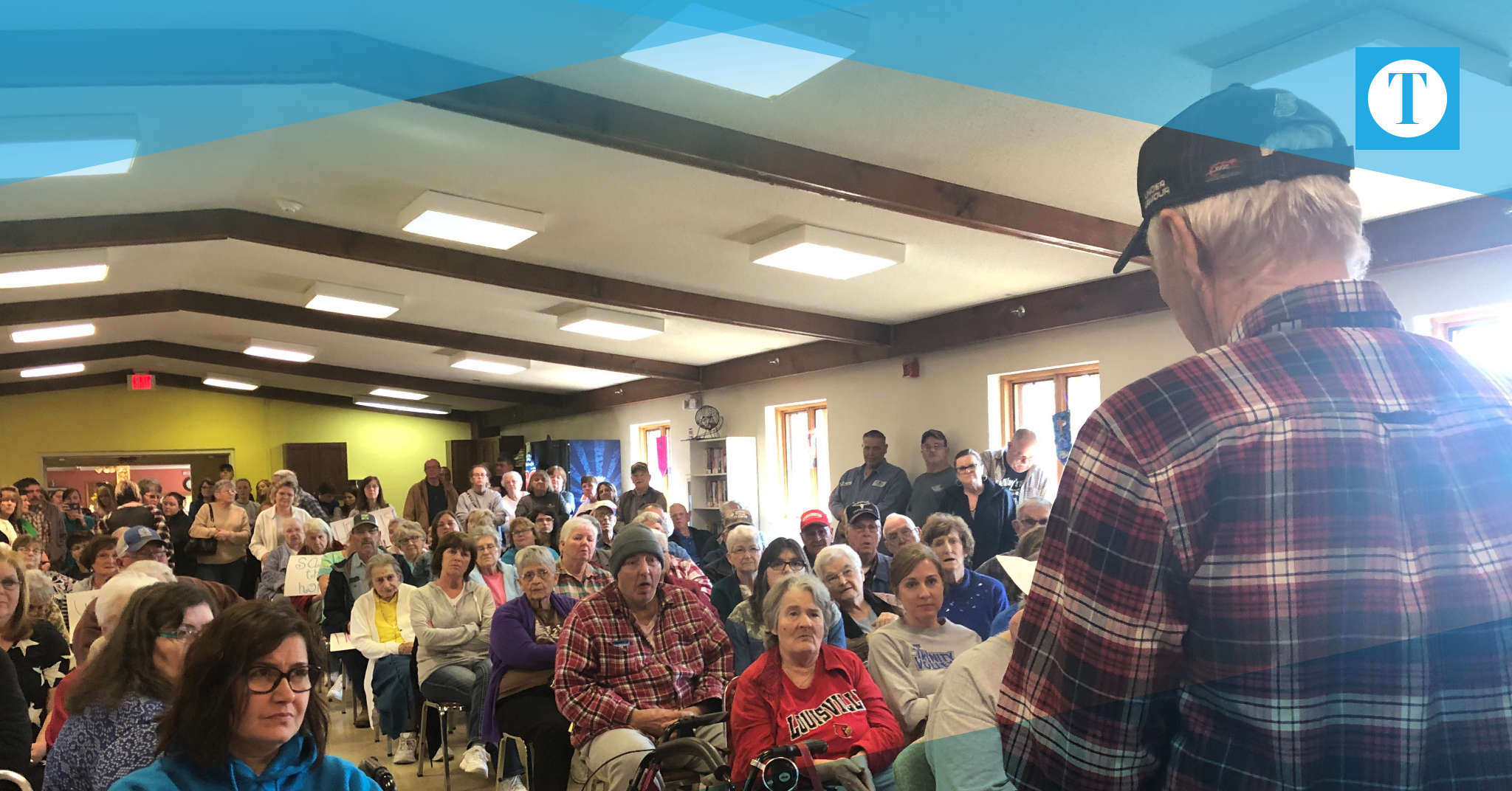 Hundreds gathered Tuesday inside the Bishop Soenneker Home in Knottsville in a community-wide effort to seek answers as to why Bishop William F. Medley decided to close the assisted living facility only five days ago. | Photo by Katie Pickens

Hundreds gathered Tuesday inside the Bishop Soenneker Home in Knottsville in a community-wide effort to seek answers as to why Bishop William F. Medley decided to close the assisted living facility five days earlier.

Neither Medley nor diocese representatives were present for the meeting and it is unclear if they were invited. Sources said the diocese was aware that the meeting was taking place. Facility board members, employees and residents as well as friends and family members took the opportunity to voice concern about the facility’s closure.

Those at the facility said the notice of closing was abrupt, giving residents 90 days until the doors would close for good. According to a release sent by the diocese, they are working with Fern Terrace, an assisted living and nursing care facility in Owensboro, to determine how many of the home’s residents can be accepted.

“Our primary concern is a safe transition for every single resident,” the release read. “We are grateful for the opportunity to work with Fern Terrace to find suitable, local options for the residents at Bishop Soenneker Home.”

Bishop Soenneker Home houses 52 residents and has been open for 50 years, said board President Tim Johnson. Johnson spoke to an anxious crowd, some who carried signs in protest, such as “Homeless” and “Save Our Family.”

“I got a call about one o’clock Thursday afternoon from my daughter, and she said, ‘Did you know Bishop Soenneker Home was closing down?’ I said, ‘No,’” Johnson said. “I said, ‘That can’t be true because I would have been notified, the board would’ve been notified.’”

However, Johnson and the rest of the board were not notified, and speculation was confirmed to be true, as they would soon find out. After verifying the facility was indeed closing, Johnson called the Diocese of Owensboro.

“No one would answer the phone. Around 4 o’clock that afternoon, they called me back. I voiced my concern about the home being closed down and asked why the board wasn’t notified of this decision,” Johnson said. “Kevin Kauffeld [Director of Stewardship] told me, ‘I just forgot. That’s my fault, I just forgot.’”

That’s been the only explanation Johnson and the rest of the Knottsville community have gotten from the diocese about the reason for the home’s sudden closing. Nobody knows why the Bishop has decided to close the home rather than put the building, which is owned by the diocese, up for sale. Board members confirmed that two different offers have been made to potentially purchase Bishop Soenneker Home, but the diocese hasn’t responded to their phone calls.

Owensboro Times reached out to Bishop Medley regarding the sudden closure of the facility.
“The decision to close the Bishop Soenneker Home was not made abruptly, but rather a committee spent many months studying the viability of the Home,” Medley said.

Rumors have swirled throughout the close-knit community, but Tuesday’s gathering aimed to give community members a chance to ask questions, hoping media sources can find answers where they can’t.

Patrick Johnson, a maintenance worker at the facility who quit his former job to work at Bishop Soenneker Home told the crowd that he was one of many who weren’t notified they’d be losing their job.

“Are you closing because it don’t make enough money, or is it just a want for more money?” Johnson asked. “If you’re only interested in the Parrish and the schools, and the sewer system is bad, is Mary Carrico School next?”

Medley told Owensboro Times there was no financial burden or incentive in closing the facility.

“The decision to close was not based on financial reasons but rather because we felt that in the long run the residents would benefit from the resources available at larger scale personal care facilities,” Medley said.

Speculation that Medley may close down the nearby Mary Carrico School due to an outdated sewer system that’s connected to both the school and Bishop Soenneker Home have worried many that the assisted living facility’s closure may be the first of many closures to come.

“Many factors were taken into consideration when making this decision and it was a decision that was not made lightly or hastily,” Medley said. “In the end, as the only personal care facility run by our diocese, we felt the residents could benefit from existing providers.”

The description of the facility as a home away from home was voiced by several in the crowd, many of whom began crying as they spoke about their relatives’ anxieties in having to relocate.

“One resident has been here for 44 years. It’s a lot different than when you walk into some public place,” said Cathy, the activity director at the facility. “And why we were the last to know it was closing, I have no idea.”

Although Medley wrote in a press release that a committee spent months studying the viability of the facility, those who work and live at the home said the Bishop has only visited the facility once over the last ten years. Even more, no needs assessment was ever conducted with residents.

All costs, including employee wages, at the non-profit facility are paid for through the residents’ housing payments. Medley confirmed that the diocese does not contribute financially toward Bishop Soenneker Home.

According to Bonnie McKannan, an employee of Bishop Soenneker’s for the last 38 years, employees who will be losing their jobs will likely receive severance pay in the amount of one week’s salary for each year they’ve worked at the facility.