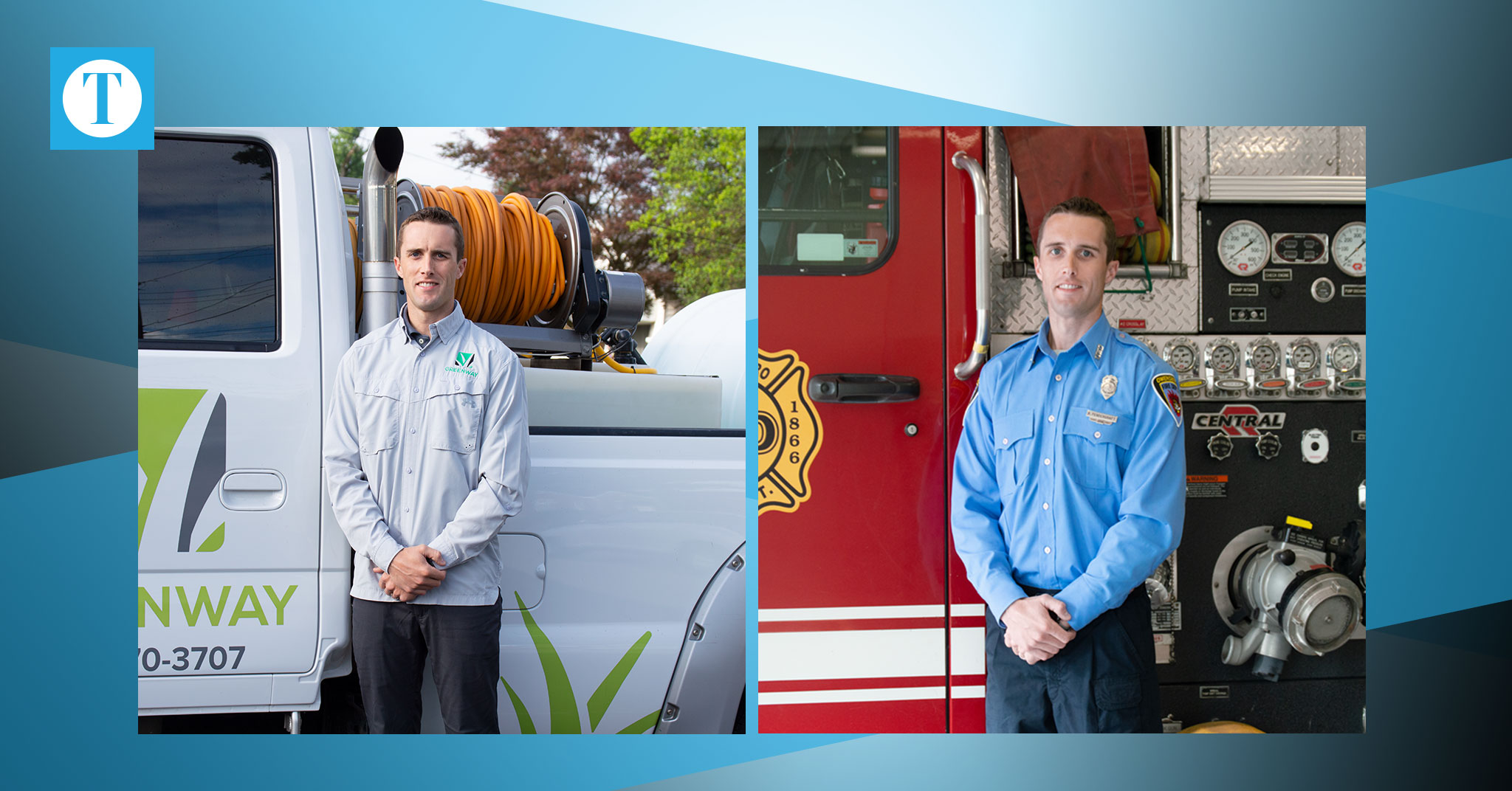 OFD firefighter Brannon Pendergraft works for another firefighter doing lawn treatment on the days he is off shift in order to help support his family of four. | Photo by Ashley Sorce

They run into danger while you’re running out. But, with alarms and sirens constantly ringing in their ears, where do firefighters run when they need to escape?

“They’re doing this job because that’s what they want to do. It’s a calling for them,” said Owensboro Fire Department (OFD) Chief Steve Mitchell. “But you have to have an outlet to relieve stress or the job will eat you up.”

A firefighter’s work is vital in the community, but ultimately it can be a dangerous and stressful career. OFD Captain Richard Peach estimates that about 70-75 percent of his fellow firefighters have second jobs including landscaping, welding, farming, emergency management and construction. Peach, a firefighter for sixteen years, has worked mowing lawns as his second job for the past thirteen years.

“I love being outside. It’s therapy for me and helps me get my mind away from this place and I think you need that because of the things we have to see and deal with,” Peach said. “I think it makes me a better firefighter, husband, and dad because you can get away from that stuff. You get past the stress and when you get home it’s behind you.”

Mitchell said that the typical 24-hours on and 48-hours off schedule for a firefighter makes it more feasible to have a job outside of the fire department.

“The reason this schedule was created decades ago was to allow for ‘stress days’ off before they went back on another shift,” Mitchell said. “Those stress days off are more prevalent now because, in the last ten years, PTSD and firefighter suicide are at an all-time high. We’re seeing more and more traumatic events now than we used to see. Having that other job gets their mind off of the things they see.”

While many in the fire service use their ‘outside’ job as stress relief or a mental break, most need the second income to support their families.

“My wife is a stay-at-home mom and we have two girls, so I’m the only income so it’s a have-to for me,” firefighter Brannon Pendergraft said. “I work for another firefighter doing lawn treatment work and we work every day that we’re off from here if it’s not raining. We stay pretty busy.”

Mitchell cited the lower amount of pay as the reason many firefighters often work other jobs.

“They’re trying to provide for their families,” Mitchell said. “The poverty level for a family of four is around $29,000 and they get paid in the mid-30s. There is a necessity for some of them.”

The lure of the second job being less stressful and having higher pay has even pulled some away from the fire service completely.

“Unfortunately, that happens sometimes,” Mitchell said. “The fire service is a calling and that’s what they want to do, but sometimes there are circumstances where they have no choice but to leave for an opportunity with better pay or benefits. It’s happened a handful of times over the last few years.”

Mitchell said that oftentimes he will take into consideration an applicant’s skills from the business they own or the job they have on the side because he knows the skills can benefit them in the fire service, as well as make the department well-rounded.

“We have four or five firefighters that have Bachelor’s in kinesiology or exercise physiology and they do that on their days off. They help keep our personnel in shape and it’s a passion of theirs to help others,” Mitchell said. “We have a lot of people in the construction business because what do we deal with? Property – buildings, facilities and they keep us up-to-date on modern building practices. They keep us educated in that way.”

Skills from jobs outside the fire uniform can ultimately come full-circle and benefit the fire department.

“If we have a plumbing problem, we can call and say this is the issue we’re having and ask what we need to do,” firefighter and farmer Luke Cecil said. “Same thing with construction — if we have a collapse we have guys that do construction and we can ask them quickly what’s best to do in that situation.”

Many at OFD not only have second jobs, but also value their role in the community by volunteering with various organizations and nonprofits.

“One thing about firefighters, they have a sense of community,” Mitchell said. “They’re heavily involved with Puzzle Pieces, GRADSA, Goodfellows, Leukemia Society and Special Olympics. They do a lot of volunteering and fundraising. I think we’re very blessed in that area.”

The juggling act of two jobs can sound exhausting, but Mitchell reiterated that his employees are fully concentrated on being great firefighters while they’re on the clock.