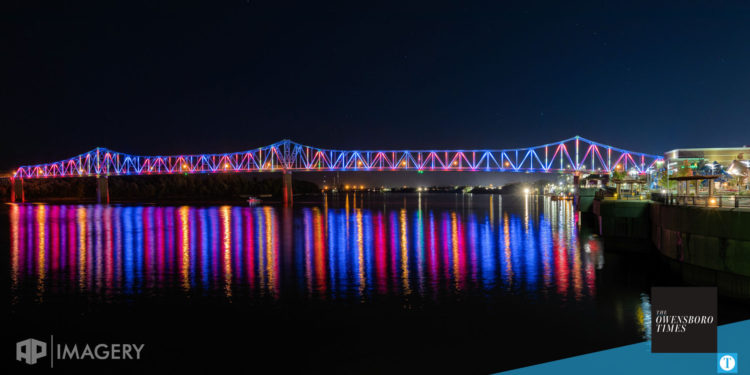 For the first time in seven years, the Ohio River was illuminated by a dazzling light display as Owensboro celebrated the culmination of a lengthy relighting project on the Glover H. Cary bridge.

“It was an awesome project,” said Assistant City Manager Lelan Hancock. “We had a lot of fun, and it seems like people love it.”

The original relighting project was spearheaded by the late David Edds. Edds’ children were present with Mayor Tom Watson to ceremoniously light the bridge.

Hancock said the City of Owensboro was able to secure some advanced lighting and programming for this project. The standard color of the lights will be a blue hue, but they have color-changing capabilities.

Hancock said the colors could be changed for holidays or special occasions.

“I have to give a huge thank you to Dirk Dooper our Assistant City Engineer David Johnson who has been the backbone of this project and who inspected every last nut and bolt in every light, and to our city manager, mayor and commission for believing in the value of this project and making the funds available to complete this wonderful addition to our downtown,” Hancock said.

Lights on the bridge were turned off permanently in 2013 after an accident occurred during the bridge’s repainting, resulting in the electrocution and death of a contracted painter. City officials made relighting the bridge a priority in recent years.

Money was specifically earmarked for the project, with the community kicking in an additional $10,000 in private investments. After initial estimates for installing the lights came back higher than expected, the project was put on hold as City officials worked to whittle the price down to $1.9 million.

Originally, the bridge was expected to be relit with LED-like lights in December 2019. However, the project’s expected completion date back by almost a year due to waits on permits, technical setbacks and other holdups stemming from the COVID-19 pandemic.