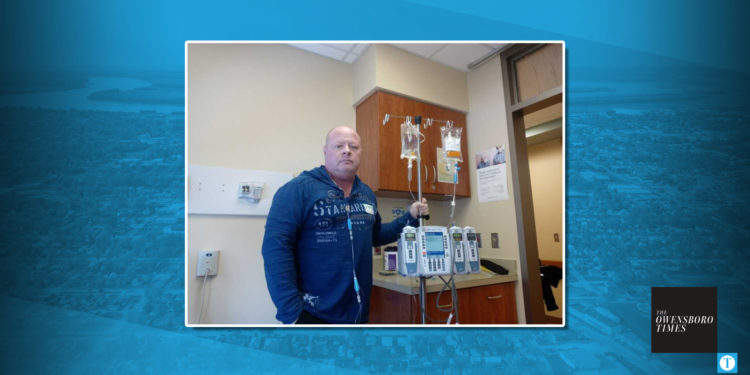 He listens to his body.

When weird symptoms appeared last fall, Massey told his fiancé something was wrong.

On Nov. 9, 2020, Massey’s pulse elevated and his energy plummeted. He rushed to the emergency room.

After numerous scans, tests and pandemic-related delays, Massey visited his primary care doctor. Massey was anemic, his bowel movements were irregular, and the possibility of colon cancer was broached — but Massey was convinced it was something mild.

He scheduled an appointment at Vanderbilt University Medical Center for a colonoscopy, which is an exam to detect abnormalities in the large intestine.

“The next thing, I’m waking up and the doctor is showing me pictures of my cancer,” Massey said. “I literally just died right there. I didn’t know what to think.”

The next step was a full body MRI.

Before the consultation, Massey pulled into the Vanderbilt parking lot and cried for 15 minutes.

“It was so stressful,” Massey said.

The MRI revealed Massey’s tumor, a treatment plan of chemotherapy and a surgery to remove cancerous tissue from the liver, and optimism for a successful recovery.

This optimism proved crucial in the coming months.

“You don’t even feel like a human being when you’re doing chemo. It’s just horrendous,” Massey said. “Everything tastes like chemo. I don’t wish it on anybody.”

Last month, after concluding chemotherapy, Massey had his follow-up MRI scan and consultation. The tumor shrank. He seemed ready for surgery.

Two hours later, his oncologist called him and told him he had a blood clot.

His surgery was postponed. He would have to continue chemotherapy. His surgery is tentatively scheduled for June.

Kentucky has the highest rate of new colorectal, cancers. Between 2013 and 2017, the state recorded 12,600 new cases of and 4,329 deaths from colon and rectum cancers, according to the Centers for Disease Control and Prevention.

The rate of colorectal cancers has been slowly falling in people aged 55 and older in recent years, according to the National Cancer Institute, but the incidence in younger people has been increasing — in 2018, the American Cancer Society accordingly lowered the recommended age to begin screening to 45.

Lifestyle factors linked to lowered colorectal cancer risks include adequate physical activity, a healthy weight, and a diet high in fruits, vegetables and fiber and low in processed meats.

Then there’s the colonoscopy.

Colonoscopies boast value as screening, diagnostic and treatment tools, because surgeons can catch the often-silent cancers early in development, according to Nebel.

For Massey, the colonoscopy was the easy part.

“It can save your life. It did mine,” said Massey, who has now successfully convinced a few friends to schedule colonoscopies. “The reason why I’m going to live is the colonoscopy. If this saves one other person from dying, then it was worth it.”