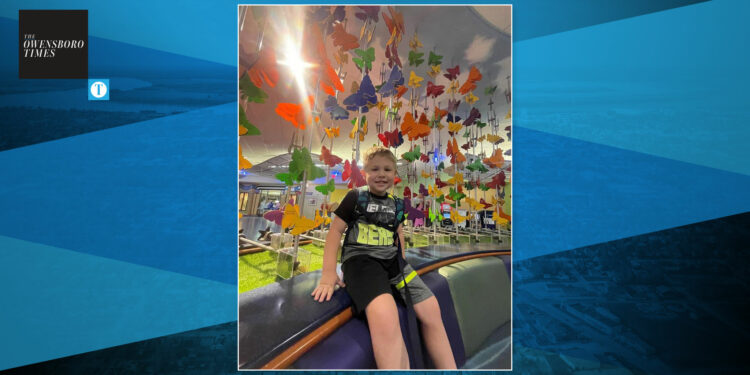 At just 5 years old, Jonah Roach has proven he is one tough little boy. After facing several physical challenges, such as having seizures, his parents started the journey to bring home a service dog for their son.

“He had his first seizure just before his second birthday,” Jonah’s mom Ashley Roach said.

“Over the last 3 years, we have been fortunate enough to develop an amazing team of doctors that are committed to helping Jonah be the best he can be,” Ashley said. “They have done several tests and help our family learn to adjust so we can have the best possible life.”

In the beginning of 2021, a seizure response dog was recommended by Jonah’s neurologist. It was determined after several tests that it is unlikely he will be able to outgrow his epilepsy.

“Our goal is to raise $38,000, as these dogs go through extensive training. The doctors, along with our family, believe Jonah would highly benefit from a seizure dog,” Roach said.

The process is quite lengthy, with the span from application to fundraising to waiting sometimes stretching out more than 4 years.

Part of this journey also includes raising awareness, helping the community to see that epilepsy is more than just having seizures. For the Roach family, being out in public can even be overwhelming at times.

“He has had seizures at home, out in public, at school, while eating, in his sleep, and even while taking a bath,” Ashley said. “Anytime he gets overwhelmed, he is at risk for a seizure. At night, he sleeps with us, as this is the safest way we can keep a close eye on him.”

Another benefit of a service dog is that Jonah will gain more independence and a better quality of life with the dog by his side.

“Jonah tends to dart off if he sees something interesting. While we use a safety backpack with a leash, the dog will be able to make sure Jonah doesn’t stray off,” Ashley said.

While there are many benefits to a service dog, one of the greatest benefits is alerting the family if Jonah is having a seizure.

“The dog will be able to tell us Jonah is having a seizure if we aren’t right there. The service dog will also be able to get his medications and provide pressure therapy after a seizure,” Ashley said.

Several fundraisers are in the works for Jonah’s service dog, with upcoming events listed on the Facebook Page, “PAWS 4 JONAH.” A silent auction fundraiser will be held at Simply Therapy on May 21 at 2 p.m. with items such as two one-day ROMP tickets, a 30-minute massage, and a party package from Balloon World and Becca Bakes.

The Roach family has been grateful and overwhelmed with the community support so far.

Donations can be made directly here.

“We know this is going to be a long process,” Ashley said. “It will give Jonah the basic independence he needs so badly.”