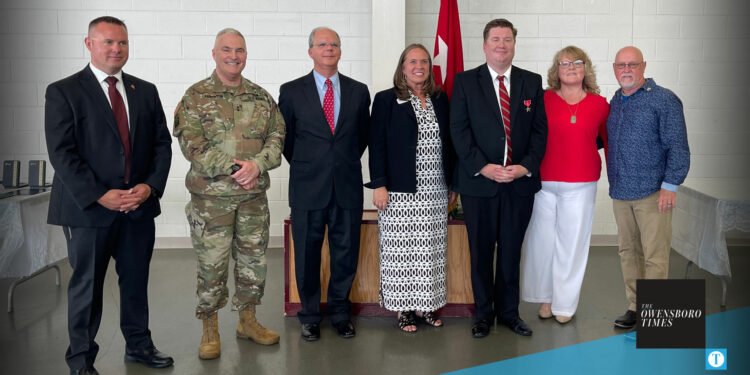 Sgt. John Burlew on Friday received a Bronze Star Medal with “V” device, the fourth-highest military decoration for valor. The medal was ceremoniously pinned on him by Rep. Brett Guthrie in front of friends, family, and military personnel at the Allen Youngman Kentucky National Guard Readiness Center.

The BSM is awarded to someone “who distinguishes himself or herself by heroic or meritorious achievement or service” according to a media release, and the small brass V designates heroism in a combat zone.

On May 19, 2002, Burlew was working as a voice interceptor and in communications, and his task force drew enemy fire in Operation Enduring Freedom — the name given to the global war on terrorism and centered in Afghanistan.

Guthrie presented the award alongside Major General Lamberton from the Kentucky National Guard.

“It’s emotional for me to do it,” said Guthrie, a retired member of the U.S. Army. “It’s a great turn out today, and to have Owensboro High School’s JROTC here…that’s how John Burlew got involved.”

Guthrie spoke of Burlew’s commitment in the early 2000s when, after graduating high school, he joined the services while America was involved in Afghanistan.

Guthrie said this award is significant. He said that a recipient is someone who, while facing gunfire, rises above it. Often, he said, people think about what they would do if they were in their shoes.

Lamberton thanked Burlew for his service, noting that only one in 40 who receive the Bronze Star Medal receive a V Device.

He said the military intelligence company that did these special missions, of which Burlew was part, were embedded with the special operations forces.

“It takes a quality person to do that – volunteer for that type of unit,” he said. “They are a special, elite group from my perspective.”

Burlew spoke of the event that lead to this commendation.

“The first emotion in ambush is fear – only second to surprise,” Burlew said.

He then talked about the fear he felt after his comrade was wounded, and his feeling of shame while wondering if he was a coward – something he said there is a fine line between.

“I think I reacted like most in this room would have – return fire and then tend to the wounded,” he said.

He said he was able to recognize that he was not a coward when, after being sent for some rest and relaxation, he realized he would rather be back in Afghanistan. He said his proudest moment was that realization, which led to him being sent back to serve on another team where he met First Sgt. Lauren Long, one of the men responsible for keeping this commendation alive.

“I accept this on behalf of my team,” he said. “There are a lot of people who made this happen.”

“Being a young enlisted soldier myself when this event occurred and knowing what John and his teammates endured made me want to assist in this effort,” Youngman said. “Years later as a commander in the unit I was in a unique position to assist in getting the information and the packet together and getting it to Congressman Guthrie’s office so that we could ensure Sgt. Burlew was properly recognized for his actions.”