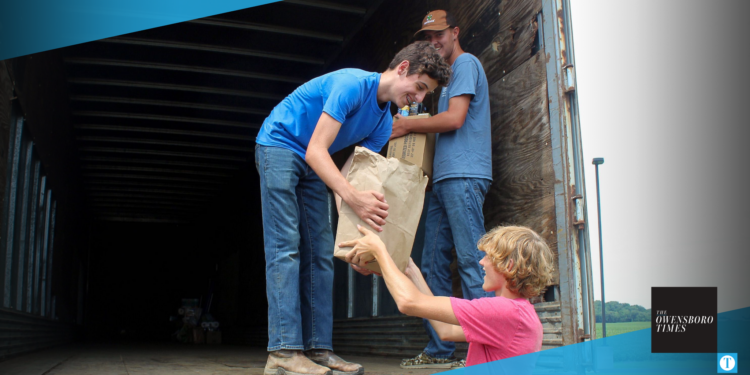 Local residents Erinn Williams and Leigh Ann Wallace both have ties to communities in Eastern Kentucky that have been devastated by the recent historic flooding, so they both immediately began looking for ways to help those in need. Both women, as well as other local organizations, are currently organizing donation drives in Daviess County.

Williams said her family in Whitley County has remained safe during, but that her husband’s family in Hindman has been impacted by the flooding.

When the news of the natural disaster came, Williams immediately contacted family and friends and started looking for ways to help those and collect what was needed.

Initially, she thought she would have to pack up her SUV and head across the state, but the community here had other plans, Williams said. A friend called and asked if she needed a larger vehicle to support and eventually, a semi-truck was called in to help transport the donations.

“I’m not surprised by that at all. I’m overwhelmed. I’m humbled, and I’m blown away that it’s turned into this,” Williams said.

Williams contacted her principal at West Louisville Elementary School and got permission to have the truck park at the school until they make the trip on Saturday. Since making a social media post seeking donations, different FFA organizations and several other groups have responded with support.

Williams said that they are seeking predominantly cleaning supplies and gallon jugs of water. Donations are accepted from 10 a.m. to 6 p.m. daily through Friday.

Wallace, who was born in Hazard and lived there until graduating high school, is also leading a donation effort.

Wallace said she was devastated and the thought couldn’t leave her mind of hearing that her childhood home was wrecked the way it was.

“I don’t know, it’s just hard to explain. Just like with any kind of tragedy — like with the tornadoes in Western Kentucky — it just hurts,” Wallace said. “But especially to see all the places where you grew up, and the schools that were devastated. It just broke my heart.”

So immediately, she wanted to do something. Using relationships built due to her daughter being Ms. Teen Daviess County and competing in pageants, Wallace put out a call for help. She said numerous people rallied behind the initiative.

Now, she has drop-off centers all throughout the community accepting donations before they head out this weekend.

“It makes you feel good about humanity because there’s a lot of times when you don’t know what to say. So this makes me feel awesome knowing that God is using all of these different people to provide needs and showing God’s love through that,” Wallace said.

Donations can be accepted at Bellevue Baptist Church and Premier Medical Group throughout the week. Bittel Hall Fairgrounds will also be taking donations on Wednesday, Friday and Saturday evenings.

Wallace noted they are also looking for cleaning supplies and water along with other supplies like buckets, mops, brooms and garbage bags.

Another local organization taking donations is the Diocese of Owensboro. They will be accepting donations from Aug. 6-7 and potentially Aug. 14-15. There they are accepting hygiene items, medications, cleaning supplies and protective clothing such as work gloves, safety glasses, and masks.

Items can be dropped off at the Catholic Charities building at 529 Cedar Street from 8 a.m. to 4:30 p.m. Monday to Thursday.