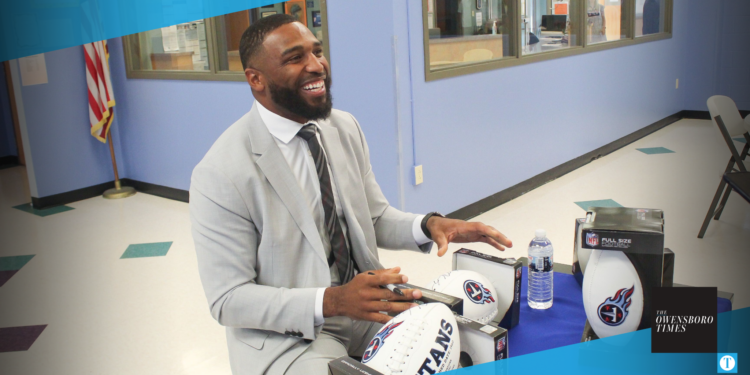 Woodyard told the kids about the importance of a village helping them succeed and how valuable the advice they receive along the way is. He said his local Boys & Girls Club was one of those villages for him.

“I used to struggle with being confident, and I think (the Club) shaped me for the future that I didn’t really know I was going to have,” Woodyard said.

He didn’t know that he was going to be around different people that he would have to befriend and then lead as a captain. Being in the Boys & Girls Clubs taught him how to be aware of his surroundings.

Woodyard said he didn’t see it coming that he would be a 12-year captain spanning from high school to professional football or a two-time All-SEC athlete while at the University of Kentucky or playing in the 48th Super Bowl.

What he did see coming, though, was that he would be giving back to kids.

“I think to me it would be a disservice to the people who poured into my life if I didn’t give back. It’s just my character to always help people and to help them become better individuals,” he said.

Through sports, Woodyard said he’s had the opportunity to level with kids through a language that most of them understand. In his eyes, athletes have a unique platform as they can influence several people on their level.

He said he tries to use that platform for the better.

Now in his retired life post-NFL, Woodyard spends his time as a player director with the NFL Players Association, meaning he’s a liaison between players and the upper union.

When he isn’t serving in that role, he spends time with his nonprofit organization, called the 16WAYS Foundation. That organization focuses on education efficacy and student literacy.

In complement to the organization’s objectives, Woodyard announced 16WAYS will be donating 500 Amazon Kindles to the Cliff Hagan Boys and Girls Club, which will be dispersed to all the different campuses they service.

In addition to the donation from Woodyard, the Boys and Girls Club’s Board voted to put $10,000 into the Jack Wells Family Assistance Fund, which will go toward families in the community that struggle with food insecurity, clothing, and other needs.