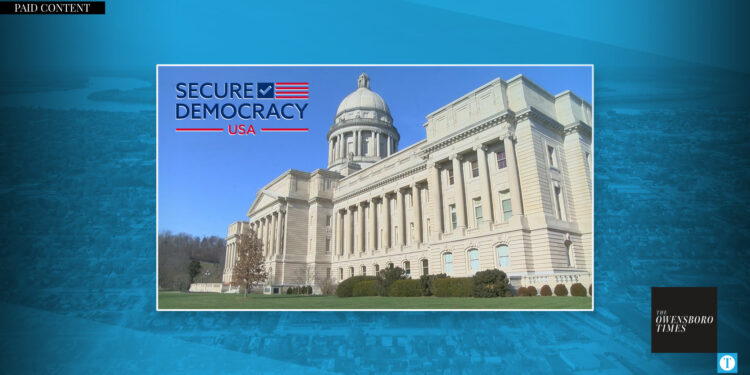 FRANKFORT, Ky. – Seventy-seven percent of Kentucky voters support the restoration of voting eligibility to people with prior felony convictions once they complete their sentence, according to a new poll commissioned by the nonpartisan election policy group Secure Democracy USA.

Conducted by the Tyson Group, the poll surveyed both a random sample of Kentucky voters and a sample of Kentuckians with felony convictions in their past — a group that has been vastly understudied to date. The poll found that people with past convictions supported Donald Trump (53%) over Joe Biden (41%) and are more likely to identify as “conservative” (53%) than “liberal” (21%).

Additional key findings from the poll of all Kentucky voters include:

● 77% of all Kentucky voters support restoring voting eligibility to people with prior felony convictions once they complete their sentence, compared to just 16% opposed. This includes 77% of Republicans, 86% of Democrats, and 71% of Independents in favor.

● A majority of Kentuckians (55%) believe restored voting eligibility should not be contingent on payment of fines and fees required by their sentence, compared to just 36% opposed.

Additional key findings about the beliefs and values of Kentuckians with past convictions include:

● 57% of those with past convictions said protecting gun rights is more important than controlling gun violence, compared to 47% of voters who felt the same statewide.

● 74% of those with past convictions said illegal immigration is a major problem in the United States, compared to just 72% of voters who felt the same statewide.

● 78% of those with past convictions report seeing voting as a duty instead of a choice, compared to just 69% of voters statewide.

● An impressive 94% of those with past convictions say they “pay close attention to what’s going on in government and politics,” compared to 89% of voters statewide. Further, 29% report having attended a meeting covering an issue in their local community or schools in the past year, compared to 26% of statewide voters.

“This new poll underscores what I have long advocated: Individuals convicted of non-violent, non-sexual crimes who have paid their debt to society should not be burdened with second-class citizenship,” said Senator Gerald Neal (D-Louisville). “Kentuckians overwhelmingly agree with giving a second chance to their fellow citizens. I stand ready to collaborate with my colleagues and move forward in this important endeavor.”

“Today, Kentucky is one of just a handful of states that does not allow for automatic restoration of voting rights,” said Senator Jimmy Higdon (R-Lebanon). “Restoring voting rights to disenfranchised citizens who have completed their criminal sentence is a compassionate, commonsense idea. This survey clearly shows that Republicans, Democrats and Independents alike agree on the need to address our Commonwealth’s status as a national outlier on this issue — and bring many of our neighbors back into Kentucky’s civic life.”

Mike Conway, state director for Americans for Prosperity (AFP) Kentucky, emphasized the importance of this issue as a critical tool for criminal justice reform.

“At Americans for Prosperity, we’re working to create a criminal justice system that recognizes the potential of every person to transform their life and contribute to society,” said Conway. “Restoring an individual’s right to vote is about restoring their full sense of what it means to be a citizen and contribute to our communities.”

“Kentucky is one of just a handful of states that permanently denies a vote to people convicted of any felony offense. It’s time for that to end,” said Charley Olena, director of advocacy for Secure Democracy USA. “Nearly 200,000 Kentuckians are ineligible to vote due to a past conviction. Restoring voting eligibility for those Kentuckians is more than just the right thing to do for our state, polling now shows that it’s overwhelmingly popular, too.”

The polls of 600 registered Kentucky voters and 100 people with past felony convictions were conducted from January 24-26 and February 2-8, 2022 respectively. Respondents in both surveys responded to live callers via landline or cell phone.

The complete polling memo from Secure Democracy USA can be found here >> https://bit.ly/3i6TLZL.

Secure Democracy USA is a nonpartisan, nonprofit organization that works to build confidence in our elections and improve voter access across the United States. We educate policymakers and the public about what it takes to safeguard our voting systems. We use sophisticated survey and messaging research to inform our strategy and we collaborate with state leaders, election administrators, policy experts, and allies to ensure that all eligible citizens have the freedom to vote how they choose.