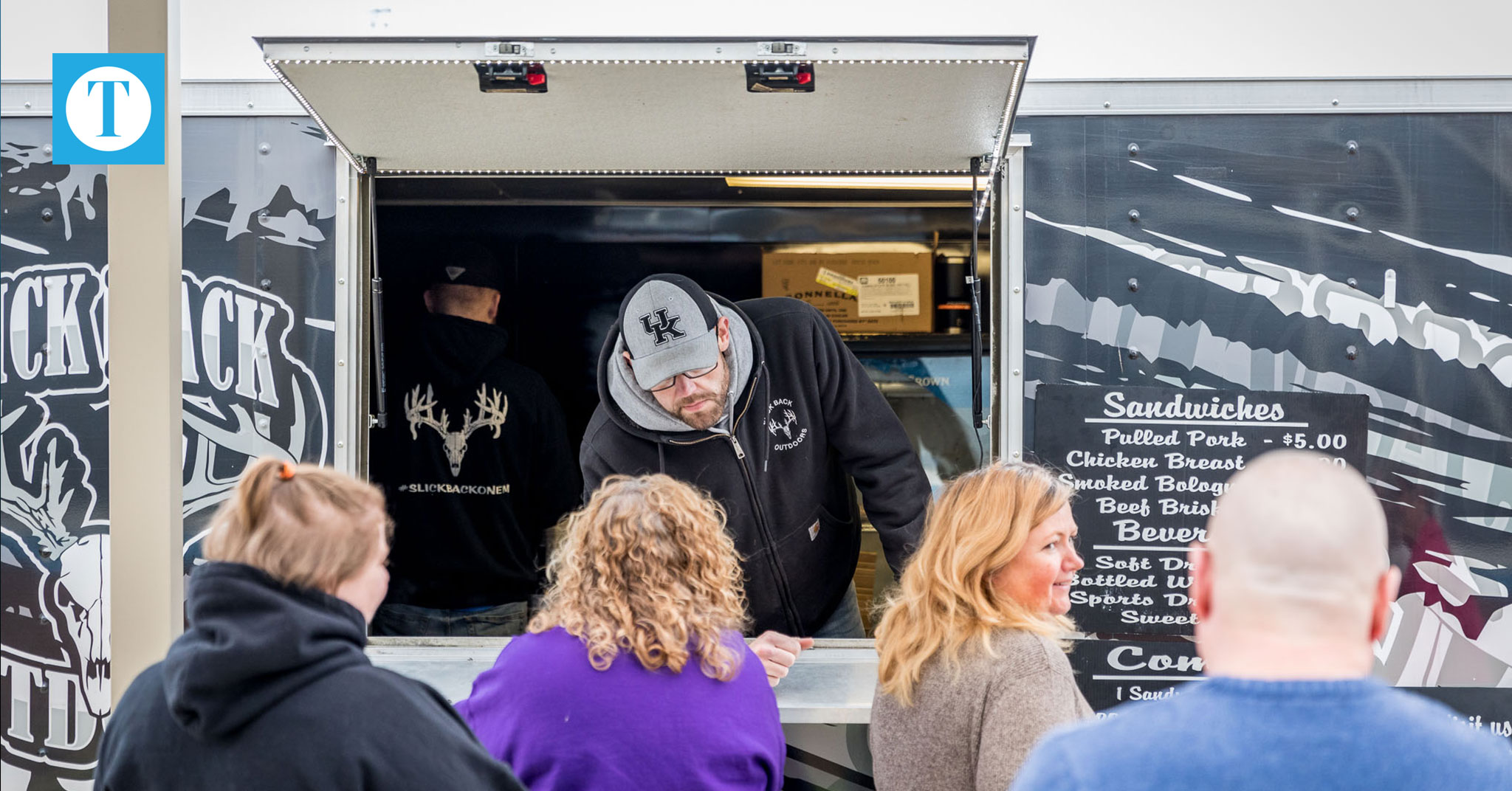 Bryan Wilson with Slick Back Outdoors | Photo by AP Imagery

After graduating from Apollo in 2002, Bryan Wilson eventually returned to Owensboro as a teacher, coach and athletic director at Burns Middle School. However, after a lot of consideration, Wilson changed careers last May to pursue his dream. Wilson can no longer be found on the football field or in the classroom, instead, you may find him putting in long hours alongside his friend and business partner David Brownd cooking barbeque and catering to the community. Together, the two co-own Slick Back Outdoors, a food truck and restaurant based out of Rosine, Kentucky.

“It has been a journey that is for sure,” Wilson said. “I reached a point that with doing both [teaching and cooking] one of them had to be put on hold — and I couldn’t let my students or athletes suffer from not being able to give them all I had. The same with my business. It’s something I have dreamed of all my life and I felt that if I didn’t give it the effort it deserved and it failed then I would regret it my whole life.”

Brownd and Wilson started working together three years ago. What began as an easy way to appease hungry friends and family, blossomed into much more than anything they could have ever imagined. Currently, the business venture now consists of catering, a physical restaurant in the old Woosley’s General Store in Rosine and, of course, a widely-acclaimed food truck that still makes its rounds in the Owensboro community. Soon after opening the store, Austin Brownd, David’s son, was appointed as manager of the food truck, simultaneously expanding the Slick Back family and keeping it a close-knit bunch.

Though the Slick Back brand has garnered a significant following, Wilson said that the business has less to do with making money and more to do with giving back to a community that has supported them through thick and thin.

“The customers always come first here at Slick Back,” Wilson said. “The relationships I have made through the business is the best part of what I do. Money is nice, but helping others is even better. Packing out the little town of Rosine on a Saturday night means more than anything. This is our home and making it shine makes me smile.”

The community obviously agrees, as the Ohio County Chamber of Commerce recently awarded Slick Back Outdoors with Small Business of the Year and New Business/Entrepreneur of the Year.

The Slick Back food truck menu has all of the classic barbeque foods including pulled pork, chicken and smoked bologna. Side items include macaroni and cheese and Wilson’s personal favorite, homemade pit beans. A trip to the restaurant in nearby Ohio County may also be something to consider as the in-store menu has expanded over time to include fajitas, wraps, fish, burgers and much more.

Wilson said the Slick Back family has come to use food as a way to combine fun, family and goodwill in a way that satisfies people and brings them joy. They call it the Slick Back lifestyle.

“We named the business Slick Back after my father and David’s late friend Hoss,” Wilson said. “The man we called ‘Hoss’ loved to fish, more than anyone else I’ve ever met. He would always yell out when he got a bite, ‘You gotta slick back on ‘em!’ If he saw your float bounce, he would yell at you and scream those words. So anytime we were fishing, we all said the same thing. Now, with everything we do, we say it — fishing, hunting, eating or whatever. Basically, to us, it means to give everything you have to whatever you do in life.”

You can follow Slick Back Outdoors on Facebook and find out when the food truck is available for booking in the greater Owensboro area.

“Our community gives us so much, it is only right that we give back to them,” Wilson said. “We like to think that putting a smile on someone’s face goes a lot farther in life than emptying their wallet out.”