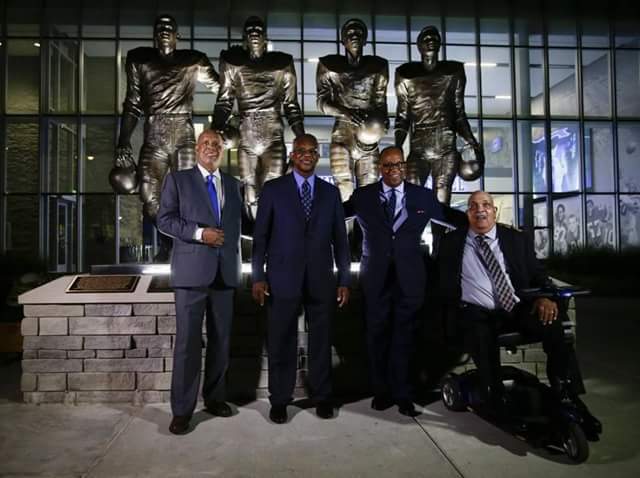 The brother of late Greg Page, Nate Northington, Wilbur Hackett and Houston Hogg celebrate the unveiling of the SEC Trailblazers statue dedicated in their honor, which sits outside UK's Commonwealth Stadium. | Photo courtesy of Paul Wagner

Fifty years ago, every athlete in every sport at every school in the Southeastern Conference was white. But that all changed when four African-American Kentuckians signed to play football for the University of Kentucky.

In 1966, Nate Northington and Greg Page signed letters of intent to play football at UK, making them the first African-American athletes in the SEC. The next year, Wilbur Hackett and Owensboro’s own Houston Hogg joined Northington and Page in Lexington. These men paved the way for all black athletes that have played in the SEC since, a monumental accomplishment that wasn’t acknowledged until 2012, when a group of former UK football players decided fifty years was long enough for these four men to remain unrecognized as heroes.

This group of former players signed a petition asking UK to officially recognize the four men and erect a statue in their honor outside of Commonwealth Stadium. UK answered the call to action, and now Northington, Page, Hackett and Hogg are forever memorialized for breaking the color barrier of sports in the South. But their recognition doesn’t end there.

Fellow teammate, Paul Karem, and another UK classmate, Academy Award-winning filmmaker Paul Wagner, have partnered together to tell the story of these four heroes. With four years of work, the two have made a documentary, “Black in Blue,” detailing the struggles and triumphs, victories and tragedies, of Northington, Page, Hackett and Hogg.

“You couldn’t pick four better people – black or white,” Karem emotionally said. “The accomplishments they had after football speak to what they are and what they were. And here’s the critical piece – the reason this story hasn’t been told for 50 years is they would never call attention to themselves.”

Other documentaries about integration in football have been made. Like the 2013 film “Against the Tide,” which depicts the 1970 game where the all-black starting backfield of the University of Southern California Trojans defeated the all-white Crimson Tide 42-21. And the ESPN film “The Color Orange: The Condredge Holloway Story,” about the first African-American quarterback at an SEC school in 1972.

“These men should get all the credit that can be layered on, but they are five years after the groundbreakers,” Karem said of the athletes in these documentaries.

For Karem and Wagner, “Black in Blue” commemorates the story that should have been told first.

Owensboro Gets a Sneak Peek and Honors One of Their Own

Almost two years ago, classmates of Daviess County High School football stand-out Houston Hogg approached Vicki Quisenberry, Executive Director of the Foundation for Daviess County Public Schools, to help honor Hogg for their 50th class reunion – not for his role in integration of the SEC, but for his life after college football.

Houston Hogg returned to Owensboro after graduating, and met his wife, Deborah to whom he’s been married for 44 years. Together, the Hoggs raised a family of six children. Hogg is now retired from the AEP power plant in Rockport, and he and Deborah have 19 grandchildren. Additionally, the Hoggs have generously opened their home as foster parents to over 200 children in the last 25 years.

Quisenberry’s answer to honoring Hogg was the establishment of the Houston Hogg Youth Fund, which raised $3,000 in its first year. Vicki recounts that at the reunion, one of the classmates said, “We can do better.” Hogg, who was present that day of the reunion, made mention of a “little” documentary being made to honor him and his fellow black teammates.  After a little digging and connecting with Paul Karem, Quisenberry soon realized the “little” documentary was, in fact, a very big deal.

Quisenberry immediately began working with Karem and Wagner to bring the first sneak preview of “Black in Blue” to Owensboro before its official New York City premier. The Foundation has been working with Visit Owensboro, Friday After Five and the City of Owensboro to make this an event worthy of Houston Hogg and his accomplishments, both on and off the field.

On Friday, July 27, Hogg was inducted into the Owensboro Walk of Fame during Friday After 5 festivities. The following day, a VIP reception, dinner (for 300 people) and sneak preview of “Black in Blue” (for an additional 1,200 people) took place at the RiverPark Center. Paul Karem was Master of Ceremonies for the event and local businessman and fellow UK teammate, Paul Martin, helped bring former teammates to support Hogg that night. And all four local high school football teams received donated tickets to watch this special documentary. 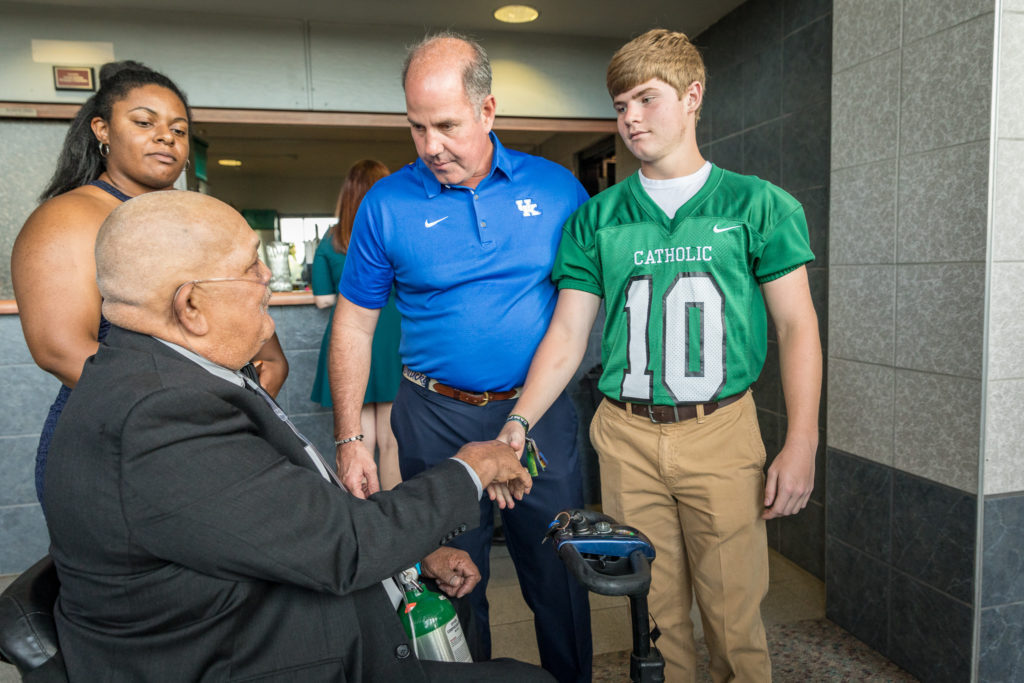 Even Wilbur Hackett made the trip to Owensboro for the sneak preview and to support fellow teammate, Houston Hogg. “Even though I was the captain,” Hackett said, “Houston lead me. He way my captain. I have always looked to him for advice. He was wise and quite the man, fostering all of those kids. He has always been like that. This night is very befitting of my friend.”

Home » News » Owensboro gets first preview of “Black in Blue”