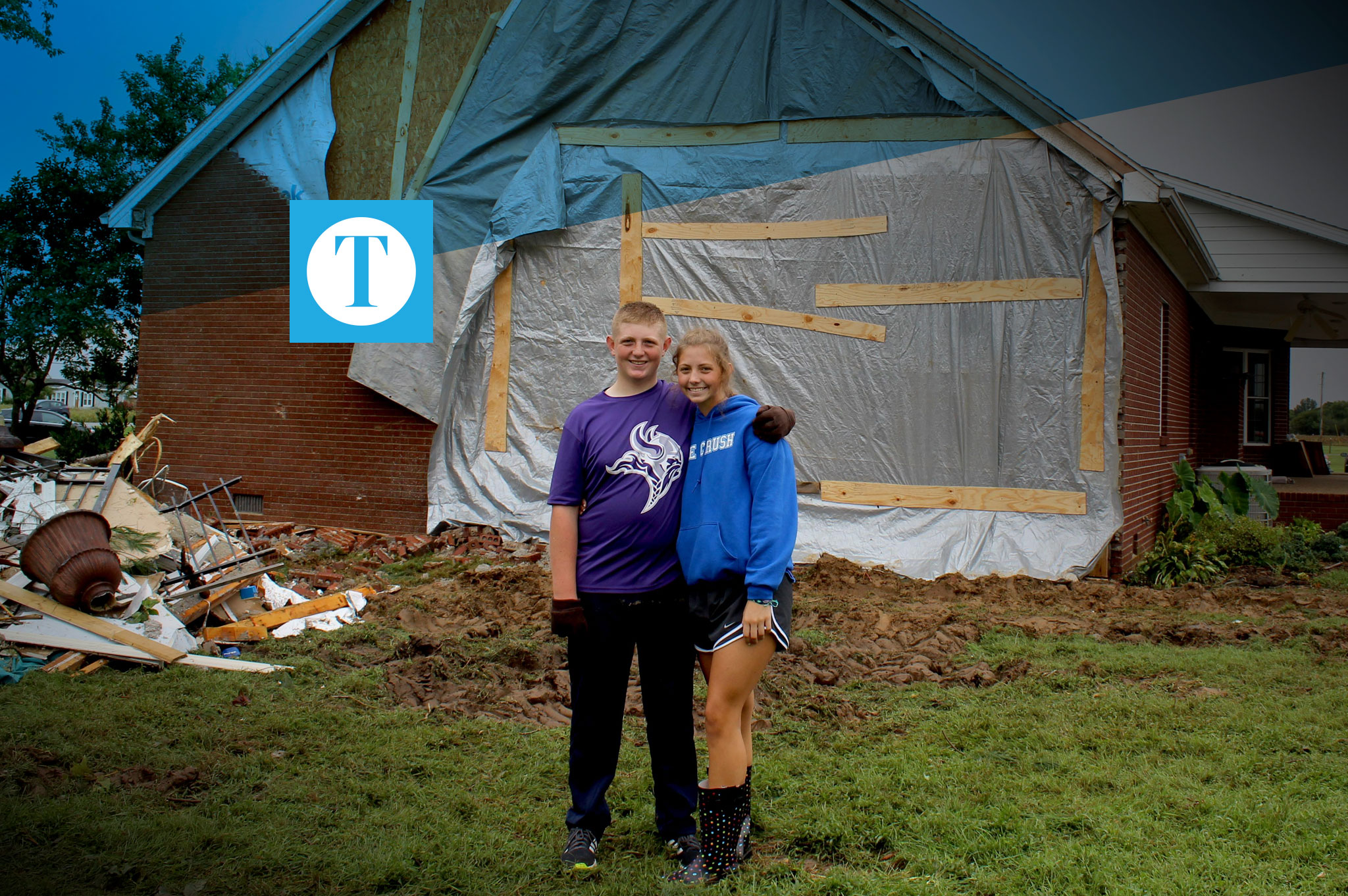 The EF1 tornado that wound through Stanley, Ky. Saturday has been the focus of hundreds of local and national news stories today. The storm itself is not the real story. The people that were impacted and that came together in its wake are what tell the most powerful story of all.

The tornado touched down in northwestern Daviess County in a bean field across the street from the Carter family’s residence on Highway 60-W and caused more extensive damage to the family’s home and property than anywhere else in the area.

Carrie and Jarrod Carter were attending their oldest daughter’s golf tournament in Bowling Green, Ky. when the tornado struck their home in Stanley. The Carter’s two youngest children — Addison, 15, and Carson, 12, were home alone.

“I got the alarm on my phone saying to go into a closet for safety,” said Addison, who initially didn’t believe the tornado would happen.

Addison and her younger brother hid in their parent’s master bedroom closet under some clothes as a precaution and Addison called her mother.

“Mom, the whole house is shaking. It’s shaking again,” Carrie Carter remembers Addison saying. “I told her, ‘Just stay there’ [in the closet].”

Carrie, her oldest daughter, Briley, 17, and her husband, Jarrod — a golf coach at Apollo High School — immediately left the tournament and sped home.

Addison and Carson didn’t realize the severity of the situation until they heard the tornado touch down, wind through the family’s front yard, and tear away an entire wall from their parent’s bedroom, just 10 to 15 feet away from the closet where they had taken safety.

“It sounded like an earthquake,” said Carson. “She [Addison] was crying. We didn’t hear it coming until then…It was there, it broke everything, and it left.”

Immediately, the power went out and they heard screaming from outside. The two soon realized the screams were coming from neighbors across the field who witnessed the damage to the Carter’s home and were checking to make sure the family was OK.

“I don’t think I’ve been that scared in my entire life,” Addison said.

The closet proved to keep both children safe as items, furniture, and pieces of the house fixtures were sucked like a vacuum from inside of the home. The debris was scattered across several fields and farms that surrounded the family’s property.

“Our stuff is all over the place, all the way back to the farmer’s house behind us,” said Briley. “My car is totaled. We don’t have a roof on our garage. The disaster team is coming tomorrow to check everything out.”

When the kids exited their parents’ closet, Addison called her mother, saying, “Mom, you lost your bedroom wall.”

Initially, Carrie didn’t believe her daughter’s words, but after seeing a picture of the gaping hole in the side of the house, she soon realized the truth.

“It was wide open,” said Carrie.

The wall of the house was not only damaged, but the tornado also tore the roof off of the family’s detached garage and off the family’s pole barn, destroying the vehicles inside. Not a single vehicle that sustained damage is driveable, according to Carrie.

In the last 24 hours, families, friends, co-workers and church members have worked non-stop to help the Carter family patch up the side of the house and begin cleaning up the mess.

After church on Sunday at Pleasant Grove, nearly 50 people worked across different areas of the property to begin clearing tree limbs, entire trees and debris that had overtaken the Carter’s land.

Due to the damage, the family will be staying with Carrie’s parents until an engineer and insurance adjuster have had time to assess the damage and give a timeframe for repairs.

Although he is facing the same uncertainty, Jarrod is grateful for the help they’ve received, and that no one in his family was injured.