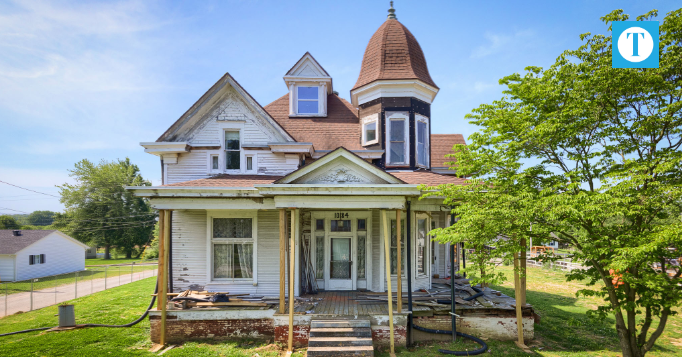 The James L. Stinett home in Whitesville is currently being renovated by the Whitesville Historical Society. | Photo by AP Imagery

The Whitesville Historical Society was organized in September 2016, by a group of citizens interested in preserving and promoting local history. Within a few months, the group was regularly with 20 or 30 members.

“After observing this overwhelming interest in the preservation of Whitesville history, a benefactor with area roots helped the Whitesville Historical Society obtain a location for our headquarters,” said society director Judith Ralph.

The society uses the former home of Byron and Berta Martin which was built in Whitesville in 1976 as a headquarters which houses their collection of photographs, artifacts and genealogy information.

According to Ralph, the collection also includes two donated Whitesville cabins. One cabin is being restored as an Eagle Scout project and was probably built between 1830 and 1840. This cabin was well-preserved because a home with siding was built around it.

She said the second cabin is a two-story log house and was also probably built in the 1930s. Placement of the cabins for public viewing hasn’t been determined yet.

Ralph said one of the historical society’s goals is to highlight the unique elements of the Whitesville community story in order to become an attractive day trip for visitors to area cities like Owensboro.

Leslie McCarty has served as president of the Whitesville Historical Society for about two years.

McCarty said the society acquired the James L. Stinnett House on KY 54 in Whitesville in 2018 and is already working to restore the property.

McCarty said the property where the Stinnett House is located was deeded in the late 1800s, but the society is still researching exactly when the home was built.

The Property Valuation Administrator’s office dates the home in 1906, and the society has a picture postcard of the home dated that year, but no other written records are available to verify the year the home was built.

“The Stinnett House is kind of a Whitesville icon because it is a late Victorian style house sitting on KY 54,” said Ralph. “There’s no other house in Whitesville that looks exactly like it.”

McCarty and Ralph describe the house as a 4,000 square foot, two-story home with 10 Greek Ionic style columns with ornate capitals, a turret and a basement. The home has a brick foundation, clapboard siding and a multi-gabled roof.

“The original roof was slate,” said Ralph. “But that last owner replaced that with asphalt shingles.”

Work to restore the home with historical accuracy is already underway. Exterior paint is being removed and an oil-based primer is being applied to protect the wood siding.

The columns have been removed for restoration, so the porch is being supported temporarily by wooden posts.

Plans are underway for replacing window sills, soffit boards, outside moldings and the skirting around the house. The windows will also be glazed.

“We want it to be as original as possible because most of the features in the Stinnett House are still there,” said Ralph. “Basically the house has not been changed since it was built.”

According to McCarty, the process for getting the property listed on the National Historical Register has been started.

Jackie Bickett, secretary of the Whitesville Historical Society, is working on that historic register application.

“The application is a long process because of the types of things they want to know when you fill out your application,” said Bickett.

The applications require documentation on when the home was built, the type of architecture featured, what is still original to the property, and anything that is unique about the property.

According to Bickett, she is working through the Kentucky Heritage Council to make edits to the application before it is reviewed in August.

“They like to see things that are original,” Bickett said. “They want it to be as original as can be and not structurally changed.”

To allow the community support the James L. Stinnett House Restoration Project, the society has initiated a “Raise the Thermometer” campaign.

The goal of the campaign is to raise $60,000 for phase one restorations costs. “We have currently raised $22,000,” said Ralph. “Initially we are seeking corporate and individual donors that are interested in sponsoring our project financially or by volunteering services or goods.”

Other sources of funding will be through events and grants.

“Generations of people have grown to love this Whitesville treasure due to the many generations of families that have called this house home,” said Ralph.

For more information about the Whitesville Historical Society or the James L. Stinnett House Restoration Project, call them at 270-233-8035 or visit headquarters at 10142 KY 54 in Whitesville.