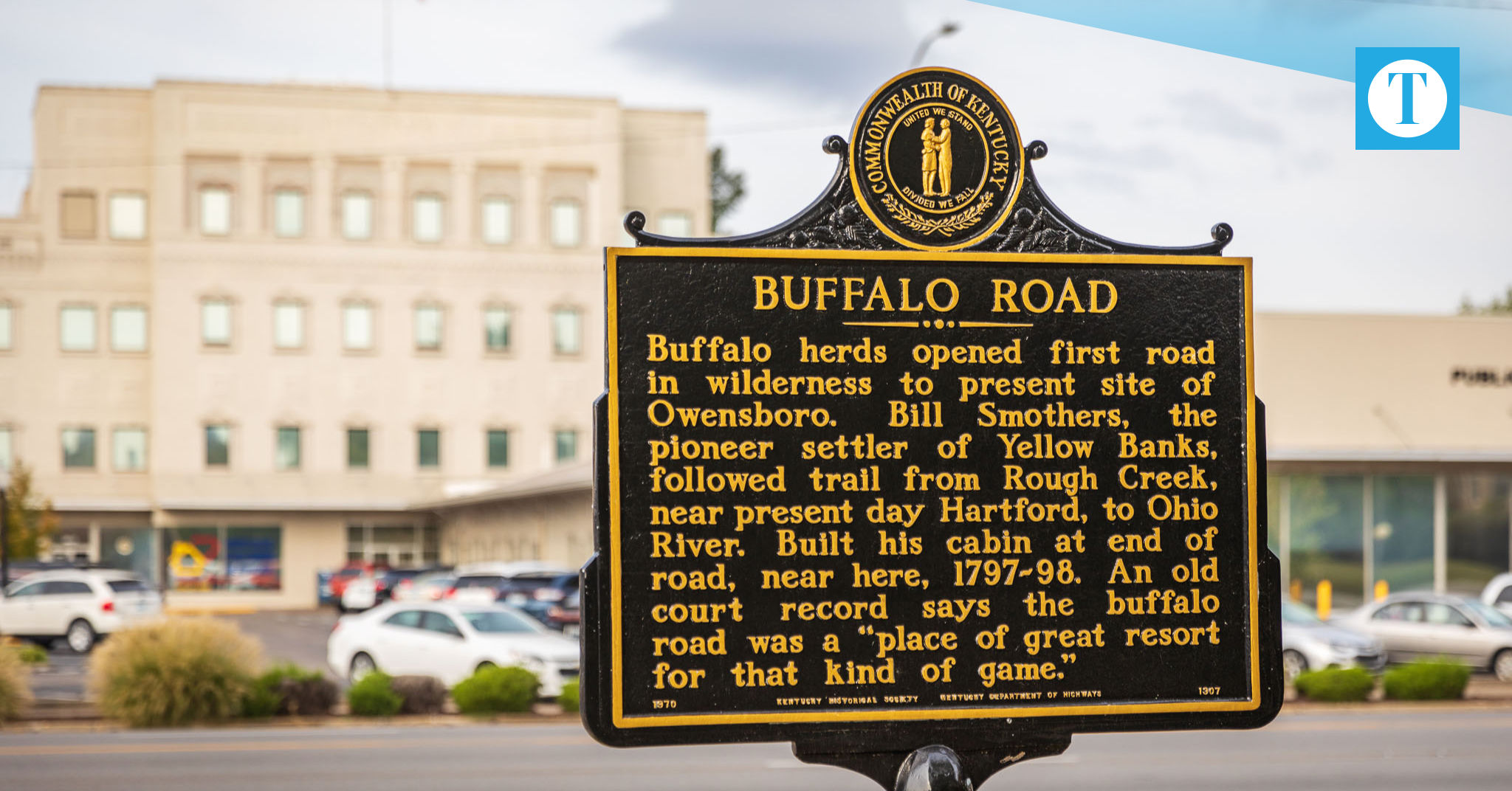 When we think of the lyrics to the well-known folk song, “Home on the Range,” a “home where the buffalo roam” may not immediately bring to mind images of Owensboro. But, 200 years ago, the buffalo trail under what is now Frederica Street was one of the most important natural features that would lead to the founding of the city.

According to Hugh O. Potter’s History of Owensboro, a buffalo trail (also known as a trace) began where buffalo were naturally gathering at a salt lick near the north and south fork convergence of Panther Creek, southwest of Owensboro. This buffalo trail led north to the nearest crossing of the Ohio River, at what is now downtown Owensboro.

According to the University of Kentucky Department of Geography, buffalo trails were some of the first primitive roads that cut a path through the wilderness of Kentucky, leading settlers to establish cabins and businesses along well-traveled portions. Over the years, they did just that, as people like Bill Smothers (Smeathers), the first settler of Owensboro, traveled along the buffalo trail that passed through downtown Owensboro. According to a letter from Smothers, the buffalo trail and “the Big Lick on Panther Creek” were highly trafficked at least by 1780. This buffalo trail would have been part of a larger trail leading from Fort Hartford, Kentucky (present-day Hartford) to the encampment on the river named Yellow Banks (present-day Owensboro) by Smothers.

The buffalo trail paved the way for the beginning of commerce around the Ohio River at Yellow Banks (Owensboro). As the earliest known settler of Owensboro, Smothers built a cabin that also served as a tavern around 1797 to attract keel boaters seeking food and drink while breaking from their jobs. Eventually, this buffalo trail became the main avenue for business and stately homes in Owensboro. Today, we know it as Frederica Street, possibly named for local landowner David Ross’s child, Frederica (based on information from the Kentucky Room at the Daviess County Public Library).

In 2007, the city of Owensboro launched a project called, “Bronze Buffalo Trace” to commemorate the history of the Buffalo Trail by commissioning statues of bronze buffalo that can be seen near the Owensboro Museum of Fine Art.

According to Mary Bryan Hood, Director of the Owensboro Museum of Fine Art, Ryan Sculpture Park was established in 2008 at 9th and Frederica Streets to house this project. In 2008, the Owensboro Museum of Fine Art and the Owensboro Public Art Commission erected the first of several bronze buffalo sculptures titled, “Into the Wind,” created by Texas wildlife artist T.D. Kelsey. In 2013, the park added another sculpture titled “Meadowlands Pair,” depicting a mother buffalo and her calf. A third sculpture was commissioned in 2014, depicting a Native American buffalo hunter, titled “Strength of the Maker.”

To further designate this space in honor of the former buffalo trail, the Buffalo Road historical marker located by the old Owensboro riverfront (pre-dating Smothers Park) was relocated to Ryan Sculpture Park with the bronze sculptures.

The marker reads, “buffalo herds opened the first road in the wilderness to present site of Owensboro. Bill Smothers, the pioneer settler of Yellow Banks, followed trail from Rough Creek, near present-day Hartford, to Ohio River. Built his cabin at end of road, near here, 1797-98. An old court record says the buffalo road was a ‘place of great resort for that kind of game.’”