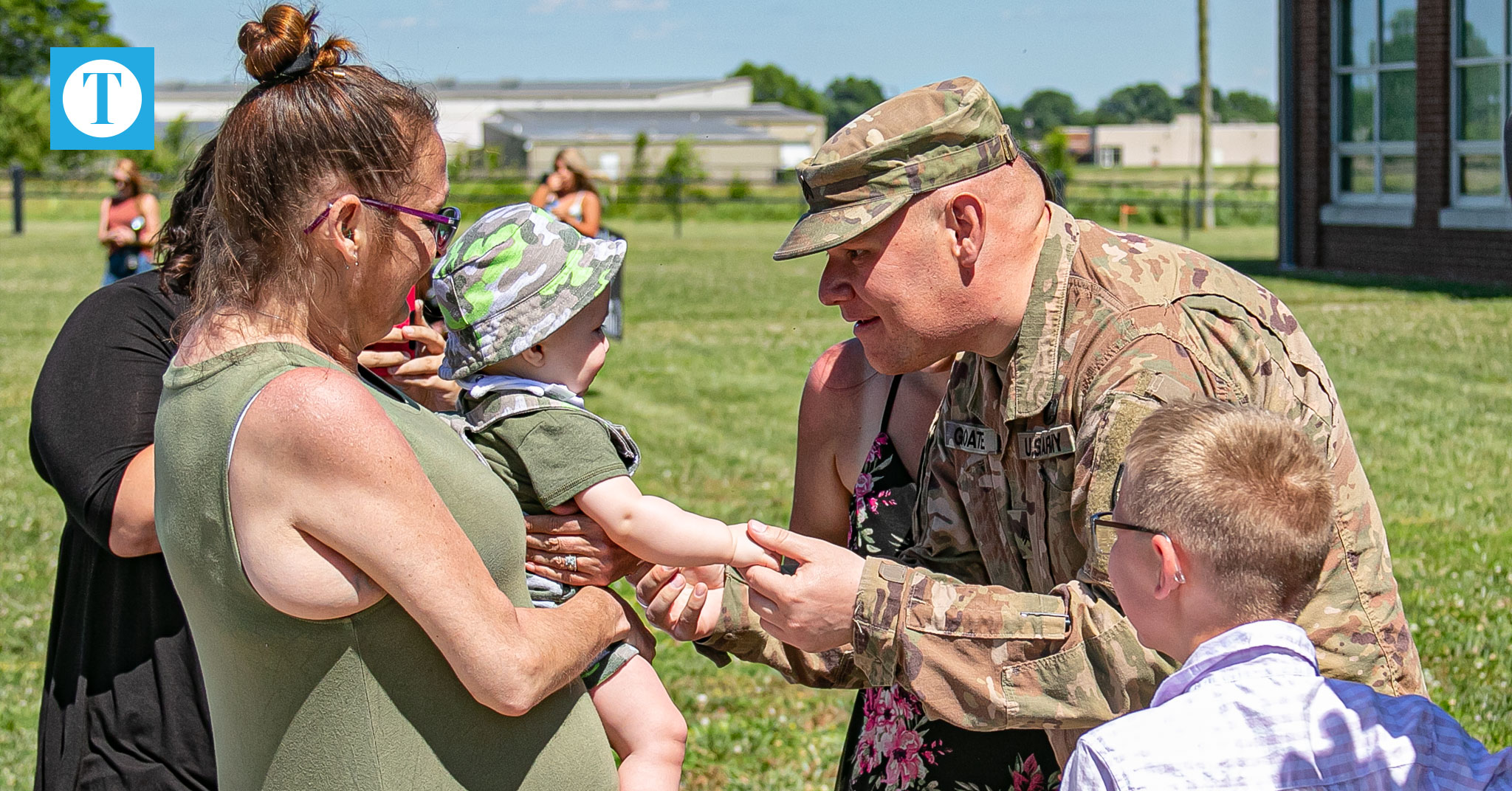 Sgt. Jamison Goatee met his 9-month-old son for the first time Thursday during an emotional reunion with his family. | Photo by Ryan Richardson

Sgt. Jamison Goatee met his 9-month-old son for the first time Thursday during an emotional reunion with his family. Goatee was one of nearly 200 members of the Kentucky National Guard who returned home after spending almost a year deployed to the Middle East.

Goatee embraced his son Edward for a long time Thursday, and he was largely at a loss for words on how much the occasion meant to him. Goatee said he was at least able to watch the birth virtually in September, saying it was bittersweet at the time.

“It was hard not being there but at least I was able to talk to (my fiance Makayla Lee) and witness it happening,” Goatee said. “It made me feel good to know I could at least do that.”

As she waited outside the National Guard Armory for Goatee to be released, Lee was anxious to embrace her fiance again.

“This moment to be reunited with him is the most amazing feeling in the world because I’ve waited for this, and to see him bond with our child is just breathtaking.”

Those sorts of embraces went on for a few hours as members of Kentucky National Guard’s 206th Engineer Battalion steadily filed out of the Armory. The 206th was deployed in July of 2019. They returned from Operation Inherent Resolve – a military intervention against ISIS in Iraq and Syria.

Young children sprinted to the outreached arms of their parents. Couples clung tightly together without saying a word. Proud parents shed happy tears from seeing their children again.

Spc. Cory Ripato was all smiles upon walking through the doors. Long hugs from his mom, girlfriend and step-dad awaited him on the lawn.

“It’s a good feeling,” he said. “I’m glad to be back home. It’s been months of being in the desert, and now it’s all green. Just excited to be home.”

Sgt. Kevin Keith said he had been counting down the days until he could reunite with his family.

“Just to see the grass makes me happy. I don’t like all the sand,” he said. “(We were gone) a total of 10 months. It was long and drawn out. I couldn’t wait to get back to see my wife and my girls. I have three little girls. I missed them all.”

Keith’s wife Terri said she was glad to have him home, but he joked that he’d soon be back to work.