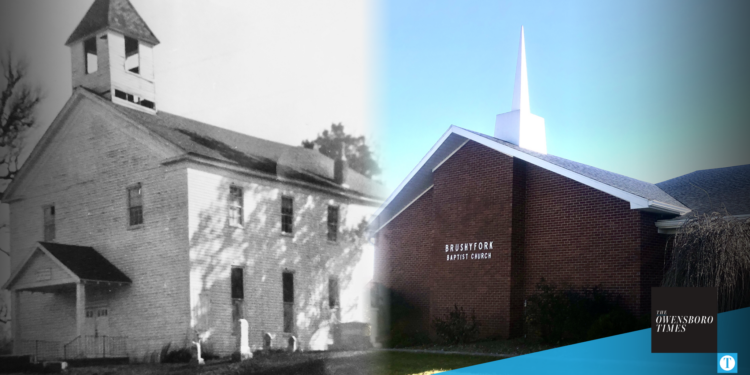 Brushy Fork Baptist Church in the Panther precinct celebrates its 175th anniversary with a light meal and a special service this Sunday evening. The church was organized precisely 175 years ago to the day by five to six people in a one-room schoolhouse just across the McLean County line.

This weekend’s celebration will feature a display of artifacts and historical documents that date back to the conception of the church.

The service will occur in the church’s “old” sanctuary, erected in 1971. A portion of the ceremonies will happen in a new state-of-the-art structure initially slated to serve as a youth activity center. Due to its size, the new facility has evolved to become a sanctuary for satisfying COVID-19 restrictions.

The congregation dwindled to two men in the 1850’s but survived to experience gradual growth in the coming decade. They discovered a better schoolhouse on KY 815 and KY 554 and moved the operation there before purchasing land a couple of miles north in 1860 to construct a new facility.

Church historian Steve Young, whose mother was a Vanover, has been a church member since he was born. The Youngs trace their membership back five generations while seven generations of Vanovers have graced the Brushy Fork pews.

“I have minutes written in quill and pen from when the church was first organized; my ancestors have passed them down,” he said. “The area was initially called the Vanover precinct because there were so many in the area. Several families have come together over the years to keep the church alive and thriving.”

After constructing a small cabin to get them by, members of the church erected a large church in 1875 that housed 100 worshipers. Local Masons wanted to include a new lodge as part of the church and raised the roof to feature a meeting house on the second floor.

“There were times where they only had 30 cents in the treasury,” Young said. “They milled everything they had and logged timber on the land to build the church. It’s the same church I went to as a child.”

Young attributes the 15-year delay between securing the land in 1860 and finishing the structure in 1875 to the Civil War.

“Half of the members were shipped off to fight a war. Some were fighting for the north, others for the south — families were separated,” he said. “Sons that used to tend crops were off fighting; the church struggled during the war.”

Though it never had running water, the structure underwent several renovations in the coming years, including installing electricity in 1930. After 94 years, the church said good-bye to the facility and celebrated their first service in the present location on Easter Sunday in 1971, led by Pastor Arnold Roberts.

The current church is located at 4418 KY 554 in Utica, while most consider the area Panther. They acquired the land in 1969 when some property was left to some of Young’s ancestors that they leased to the Green Coal Company to raise funds for the new building. Members also took out bonds to aid in funding the construction.

The relationship with Green Coal, however, ended up being bitter-sweet.

“In the early 60s, coal became a driving force in the community, and there was a lot of blasting that took place during those times,” Young said. “The blasting shook foundations of homes, collapsed wells, and tumbled tombstones. Some members worked for the company while others simply didn’t want to deal with it.”

Membership shrunk to 20 people in the late 60s, and many wondered if the church would survive. Young said the Green Coal era was a massive test for the community and its physical structures.

Fast-forward 50 years, and the church boasts nearly 100 members and a thriving young congregation. They evolved to feature traditional and contemporary services before transitioning primarily to contemporary.

“We’ve adopted a contemporary service with a praise band and eight musical pieces to cater to the next generation of churchgoers,” Young said. “We will continue to thrive. One of the quests of our pastor, Jayson Mayfield, is to grow membership and bring in new people.”

Young and company expect several to be in attendance at the celebration. It will likely be the same names in attendance that attended a revival in December of 1884 that saw over 100 individuals baptized in a cold Panther Creek, with 1,000 in attendance.