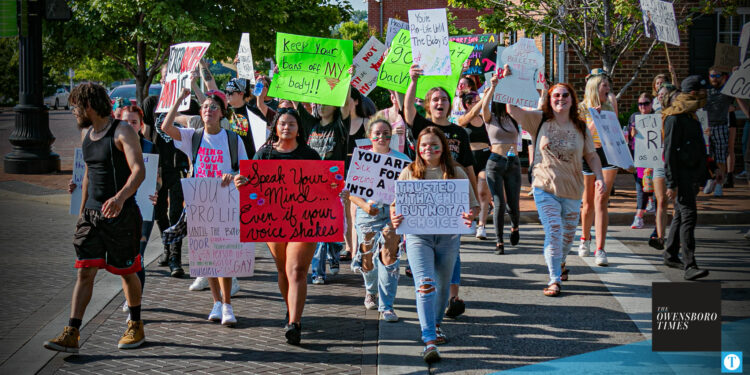 More than 300 people came together for a protest for women’s civil liberties on Thursday. Spreading their pro-choice message, attendees held their signs high, chanted off and on for 3 hours, and marched four times along the sidewalks in downtown Owensboro.

Keiara Hagan, an Owensboro High School graduate and current junior at Transylvania University, helped organize the event. Hagan, who is 20, said she has a passion for legal studies in general, but specifically civil rights.

Hagan was already looking into hosting a march when she saw that someone was organizing a “sit-in” at the Daviess County Courthouse. They decided to combine their efforts.

“Just organizing this group of people, individuals that are as outraged as I am about losing our civil liberties, is what made me start the group,” she said. “I knew there were people out there that were just as frustrated as me with our Supreme Court case decision, when most of them on the Supreme Court cannot ever and will not ever birth a baby. So I’m not sure why they’re worried about our uteruses.”

Chants ranged from “My body, my choice” to more explicit messages, and signs included “‘We will not silently go back to the 1950s” and to creative ways to say abortion is a woman’s right.

Hagan said they had people show up from as far south as Nashville and north as Illinois. She said she was overwhelmed by how many people showed up to show their support, and it demonstrates that people are ready to fight for their beliefs. Hagan said going forward, a main goal will be telling people to stay informed and vote.

“That’s the only way we’re going to get any kind of change,” she said. “We have got to start holding our people of authority accountable for their actions. They are essentially in charge of every right that we have and can take it away at any second, and that should put fear in every American person.”

One person who will have a say in Kentucky’s abortion laws is Gary Boswell. He’ll be the next state senator for the 8th District, replacing Matt Castlen (who did not run for another term).

Boswell drove by the protest and spent a short time watching from across the street.

He said it seemed to be a peaceful protest and he supported their right to do so, but essentially said it wouldn’t have any affect on his decisions in the legislature.

“This has been 40+ years in the making for us to be able to overturn Roe v. Wade. And I’m just thrilled that that’s what’s happened,” he said. “(Kentucky Republicans are) going to try to do everything we can to end abortion because it’s a blight upon our nation.”

The protest was generally about women’s liberties, but more specifically about the Supreme Court’s decision to overturn Roe v. Wade — as well as Kentucky’s anti-abortion “trigger law” that went into effect last week upon the court’s ruling. However, on Thursday, that law was put on hold after a restraining order was issued by a Kentucky judge.

Boswell said the restraining order was “mind boggling” and that the Republicans in Frankfort “are going to do whatever is necessary … to make sure that the law of the land is upheld.”

“I think the majority of the people in the state of Kentucky support that law,” Boswell said. “The legislators go to Frankfort and base the decisions they make upon what the people think in their district. I know that the people of the 8th District are strongly and overwhelmingly pro-life.”

Hagan said she is not surprised to hear that Republican lawmakers would not be affected by the thoughts expressed by those in attendance of the protest.

“The reason that they do not feel this way is because they want to keep a working class,” she said. “They want to keep an underdog class. They’ve caught on to the fact that women have educated themselves on birth control and educated themselves on being financially stable before wanting to start a family, and they don’t like that. Because that means we’re getting financially independent, and we’re able to be successful and raise these children. We’re not the stay-at-home moms without education anymore. We’re getting an education. We’re able to do that because we are choosing when and where we want to put a child.”

Hagan wanted to leave anyone paying attention with one final message.

“This is for every single individual that has to come after me and experience (anyone) treading on your civil liberties,” she said. “You hold so much power within you. You’re a force to be reckoned with. That’s the whole reason I’m here today.”

Home » News » ‘We will not silently go back to the 1950s.’ Hundreds join protest for women’s civil liberties