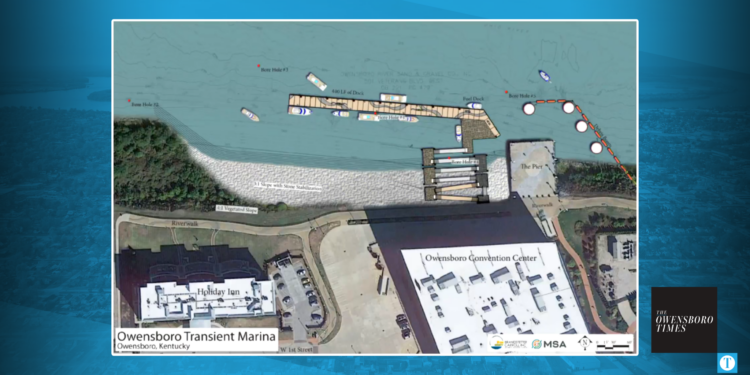 After some debate, the Owensboro City Commission on Tuesday voted 3-2 in favor of moving forward with the plans for a $9.5 million transient boat dock. Mayor Tom Watson and Commissioner Mark Castlen were the dissenting votes, both essentially saying it’s either a bad return on investment or that the funds should be used elsewhere.

While the original design called for the dock to be roughly 500 feet long by 20 feet wide, the current design has the dock at 400 feet long. That will allow it to accommodate 16 to 40 boats depending on their size.

There will also be a fuel facility for gas and diesel, waste evacuation, and electrical hookups for overnight stays.

The project is estimated to cost $9.5 million, according to engineers.

During discussion before the vote, Commissioner Larry Maglinger stated that he is for the development of the dock because he hopes to return Owensboro back to the boating destination it was when the Executive Inn was standing.

He noted that there has been more than $200 million poured into the downtown revitalization, but that there is still no direct access to the area from the river.

“The transient dock has been part of the original master plan to attract tourism and generate revenue to our entire downtown area. The cost is increasing rapidly and I believe now is the time to move forward,” Maglinger said.

Castlen, meanwhile, said that the money required to build the dock could be allocated elsewhere.

“One of the things that concerns me is we had our senior center coming to us for money and we only allocated $3 million for them, and now here we are looking at going three times that amount for some transient boaters,” Castlen said.

He also noted that there are positions throughout the city that could receive a raise with that money.

Finally, he said that if the bulk of the profit would only be seen in roughly four months out of the year, it could be too much spent for too few people.

Commissioner Jeff Sanford, who voted in favor of the dock, said the City has made other decisions to accommodate allocating money for the project. He said the dock also gives Owensboro one more thing for people to utilize.

“This is what makes us great, so we have a little bit for everybody. And that’s why people want to move here because we have so many amenities for a town this size for everybody,” Sanford said.

He also said that several former projects were considered controversial — namely ones such as J.R. Miller Boulevard, Centre Court, the Edge Ice Center, and the RiverPark Center.

Commissioner Bob Glenn also voted in favor of the project. Like Magliner, he said that while the cost is high, he thinks now is the time to move forward because the price will only get higher as the project is pushed back.

He additionally said the dock would not only help the city economically but would also help Owensboro remain competitive throughout the state.

“This is a step to make Owensboro better and more competitive with [other cities] by opening up our river. So I very much support this. I agree the cost isn’t ideal. But if you wait … it’ll be even more expensive,” Glenn said.

Watson said that ultimately he thinks while the dock will be beautiful, it just may be a “poor return on our investment.”

“Hundreds of people may come up from the boat dock to try and visit downtown Owensboro. I just feel like it’s a bridge too far, no pun intended, to spend almost $10 million for a transient boat dock,” Watson said.

Several members of the community and the surrounding area came to show support for the construction of the dock — including members of Evansville and Newburgh boating communities.