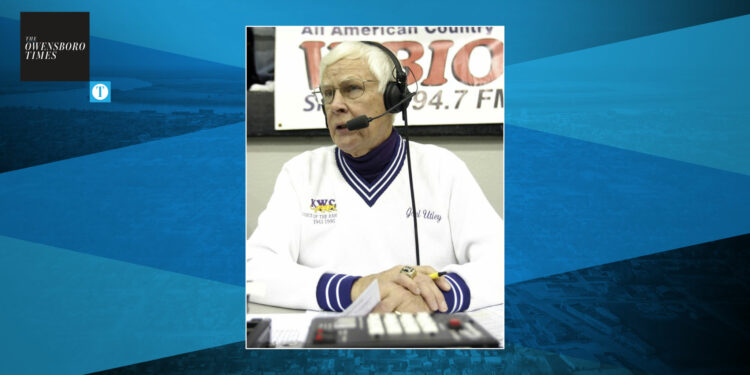 Joel Utley, known as the “Voice of the Panthers” for his historic run as a radio announcer for Kentucky Wesleyan College basketball, announced his retirement Wednesday after 61 years and the radio play-by-play of 1,933 KWC games. He is college basketball’s record holder for play-by-play longevity and total games called.

“It was a tough decision to make, but the timing is right to step down,” Utley said. “What I have done as a broadcaster reflects my love for KWC. My career has been beyond any dreams I ever had.”

“I’m not going to completely retire, as I will continue as a loyal fan of our basketball teams, the rest of the Panther sports, and my alma mater,” said Utley, a 1974 KWC graduate and Madisonville, Ky. native.

According to a 2018 Owensboro Living feature story about Utley, he knew he wanted to pursue a career in radio upon hearing words come out of a box as a child.

“My first broadcast ‘equipment’ consisted of a cutout cardboard microphone (thanks to my dad)…ear muffs for my headphones…and a shoebox with ‘dials’ marked by crayon,” he said in 2018. “I used this to create descriptions of my baseball board game as a child. I was fascinated by those word-pictures that came out of that box. Of course, that was in the days before television got going. I never wanted to do anything else than be a radio broadcaster.”

Utley received his first radio job at the age of 16 with Madisonville’s WFMW, where he started out doing high school basketball play-by-play. Utley attended Murray State and then the University of Kentucky, where he worked at WVLK radio in Lexington.

In 1961, a friend who Utley had worked with at WVLK moved to Owensboro to join the staff of WVJS and mentioned an opening to Utley — marking the beginning of his career as the “Voice of the Panthers.”

Utley’s KWC legacy started at the Owensboro Sportscenter on Dec. 2, 1961, when the Panthers defeated California State University-Northridge by a final score of 100-64.

Though he began with multiple sports, his role evolved in his announcing career, and he especially enjoyed basketball.

“It’s easier to keep up with ten guys on a court than all the guys on a football field,” he said in 2018.

Utley was chosen as one of several grand marshals for last year’s community-led Christmas parade. He considered the gesture of being nominated by his peers a high honor.

“It is humbling to realize that people out there appreciate what you do and, at the same time, want to recognize you,” Utley said at the time. “I’m just tremendously humbled and honored by the fact that I would be one of those that was selected.”