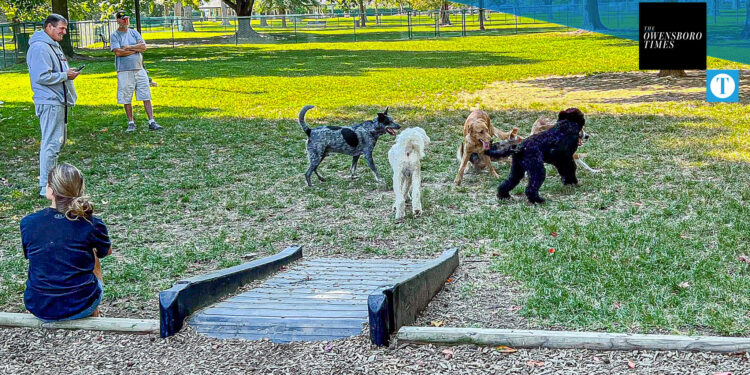 Renovations to Castlen Dog Park, located inside Legion Park, are nearly complete. Changes include adding a second entrance, as well as dividing the existing space to create a total of four sections. Owensboro Parks and Recreation Director Amanda Rogers said the improvements would decrease park closures and create a more straightforward maintenance routine.

The park was only divided into two sections — one for large dogs and one for small dogs. The parks department has divided the space into quarters to allow the turf ample recovery time and to decrease instances in which the park is forced to close because of conditions.

“We have had such great usage, which is a wonderful problem to have, but we’re having to close regularly because of ground conditions,” Rogers said. “We have so much paw traffic that we’re often left with a dirt ground. By keeping two sections open at a time, we can allow the ground to rest and conduct repair work on a more routine basis.”

Rogers said there will always be two sections operational — one small and one large — with plans to rotate openings every Monday.

The second entrance to the dog park will open this Thursday.

Rogers also recognized the public outcry for a dog park on the west side of town, stating her department was in the process of creating a new master plan for the parks.

“Our last master plan was through 2015,” she said. “We’re working on a priority listing right now and hope to have a company on board by the end of the fiscal year.”

The plan is essentially a road map for the next 10 years and offers citizens the opportunity to complete a survey about what’s working, what needs improvement, and more.

“The document will show where we’re exceeding and detail our needs, such as new programs, amenities, and more,” Rogers said. “This is another way for us to collect input from our taxpayers and help elected officials prioritize spending.”