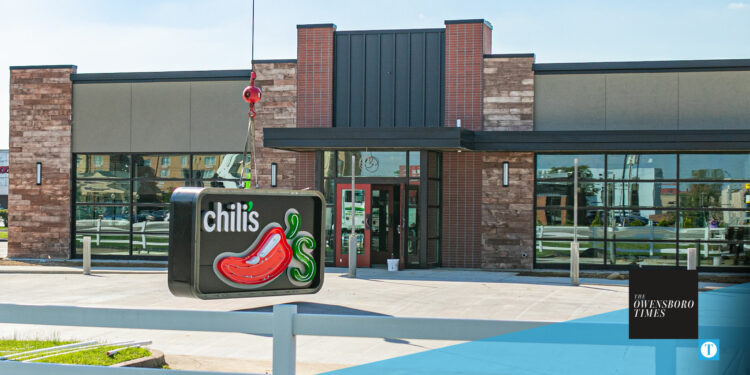 Chili's signage went up Monday, but the restaurant isn't expected to open for another 2-3 months. | Photos by Ryan Richardson

Chili’s signage went up Monday, but the restaurant isn’t expected to open for another 2-3 months, a spokesperson told Owensboro Times. The company originally hoped to open the location in August.

Still, much progress has now been made on the new Chili’s location at 4500 Frederica Street, just off the bypass.

“Our new restaurant opening schedule is constantly changing, and right now we’re expecting it to be another 2-3 months for Owensboro, likely early December,” a spokesperson said via email Monday.

Chili’s tore down the previous building and constructed a new one that faces Frederica Street. They parking lot layout was also totally redesigned.

The site was most recently was home to Golden Corral, which had been closed temporarily during the pandemic but announced in May 2020 they would remain closed permanently. The Owensboro Golden Corral location opened in March 2017. Before that, the building was formerly home to Ryan’s Buffet.