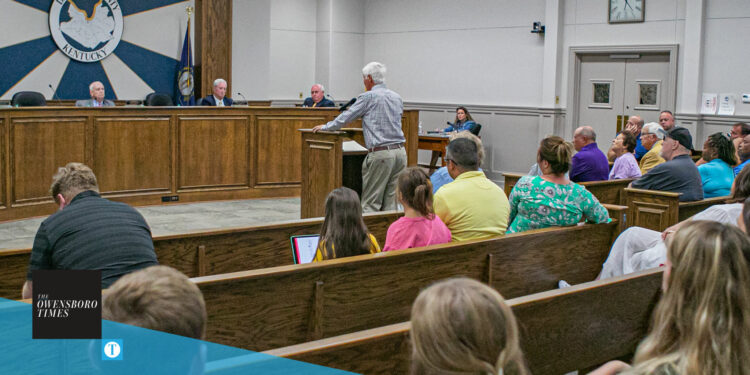 Three dozen residents have filed an appeal to fight the potential rezoning of approximately 9.5 acres that would allow 36 duplexes to be built in their neighborhood of single-family homes near Yellow Creek Park. Pictured, developer Gary Boswell answers questions from Fiscal Court members. | Photo by Ryan Richardson

Three dozen residents have filed an appeal to fight the potential rezoning of approximately 9.5 acres that would allow 36 duplexes to be built in their neighborhood of single-family homes near Yellow Creek Park. Daviess County Fiscal Court will make a ruling next month on whether or not to allow the rezoning.

Despite presentations and complaints from several concerned residents, the Owensboro Metropolitan Planning Commission voted 7-1 on August 11 in favor of rezoning land on Cambridge Drive and Sturbridge Place to allow 36 duplexes to be built in a subdivision by developer Gary Boswell.

The next day, residents contacted Owensboro Times and expressed frustration with the lack of transparency among other issues with the rezoning process and project in general.

They wasted no time in filing their appeals to the OMPC decision.

That put the issue in front of Fiscal Court on Thursday. Approximately 30 residents showed up to the meeting to show their opposition to the rezoning.

Per Fiscal Court’s rules and state statutes, however, no new statements could be given by those in the audience.

Judge-Executive Al Mattingly said he and the County Commissioners could only base their decision on the facts presented at the OMPC meeting. A handful of people were called up to speak, but it was only to clarify information and answer questions presented by the Fiscal Court members.

OMPC Director Brian Howard was the first to speak, spending nearly 30 minutes answering questions. Most were about what exactly the OMPC is and how it makes decisions. A handful were about the issue at hand.

Howard admitted that the OMPC staff reported multiple findings as reasons to not approve the rezoning request, but that the commissioners still approved it based on information presented by Boswell at the meeting. Howard said while they generally follow a formula, there is enough flexibility that it’s not uncommon for the OMPC commission to approve a rezoning even if the initial findings suggest otherwise.

Fiscal Court members then questioned Boswell, his attorney Charles Kamuf, and project engineer Jason Baker of Bryant Engineering. Collectively, they admitted some of their information was either inaccurate.

Most notably, Mattingly noted that there was an implication — based on what Baker told OMPC commissioners in August — that the county engineer and county fire chief had been consulted about the duplexes.

However, Baker said Thursday they only talked to the county engineer and fire chief when the plans were still to build single-family unites. County Engineer Mark Brasher also confirmed he never talked to anyone about a duplex development.

Lastly, residents in opposition to the rezoning were called up. Only those who spoke at the OMPC meeting were allowed to answer questions; there were only three people who met that requirement: Gail Baldwin, David Baird, and Brian Newton (whose mother lives in the neighborhood).

Only a few questions were asked of each of those residents, and they were mostly focused on the traffic flow, drainage, and similar factors typically considered during a development.

Fiscal Court will announce their decision at their next meeting, scheduled for 5 p.m. October 6. Each side will be allowed 5 minutes to present closing arguments before Fiscal Court votes on the appeal.