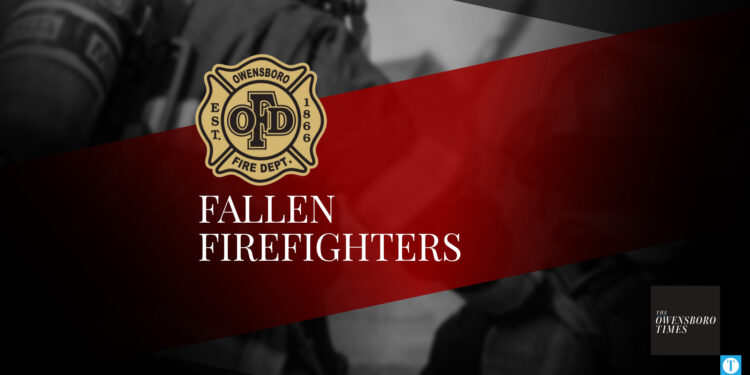 Owensboro Fire Department is looking for families of some fallen firefighters who served the community with as a member of OFD many years ago. Those who were lost on duty will be honored in a dedication ceremony in Frankfort on October 5, and OFD wants to invite all survivors to attend the Kentucky Fallen Firefighters Memorial Service that day.

Following the ceremony, names are engraved into a memorial dedicated to the fallen firefighters.

OFD Historian Andrew Behl said this is the department’s chance to show thanks to the firefighters for their services.

Behl said they have been looking into the history of the department to learn as much as possible, and along the way, four names didn’t have any report of being honored at the statewide Fallen Firefighters ceremony.

According to OFD, those are:

“From what had been documented, they hadn’t really been (honored) anywhere that I could find other than just on internal documents,” Behl said.

Behl said one was a death came in action while responding to a call, while the other three suffered from a heart attack or stroke that was linked back to a call.

An on-duty death is defined by the team as death either on the site of a call, or a death within 24 hours that can be linked back to a call, according to Behl.

Tracking the families have been difficult for Behl. He said initially the department posted a photo on Facebook showcasing the four names.

He said that post allowed them to get in touch with one of Thornberry’s relatives.

While Thornberry died nearly 100 years ago, Behl said the family responded well to the invite to honor their fallen uncle.

Through the ceremony, Behl hopes to be able to give the firefighters the kudos they deserve.

“I think they need their day in the sun really it’s kind of this forgotten thing,” he said. “It’s like you give your life to do something for the citizens — whether engaged in firefighting or related to your service — we just want to give them a kudos even if it’s close to 100 years later or 75 years later.”

Home » News » OFD looking for families of fallen firefighters, men will be honored at ceremony in Frankfort