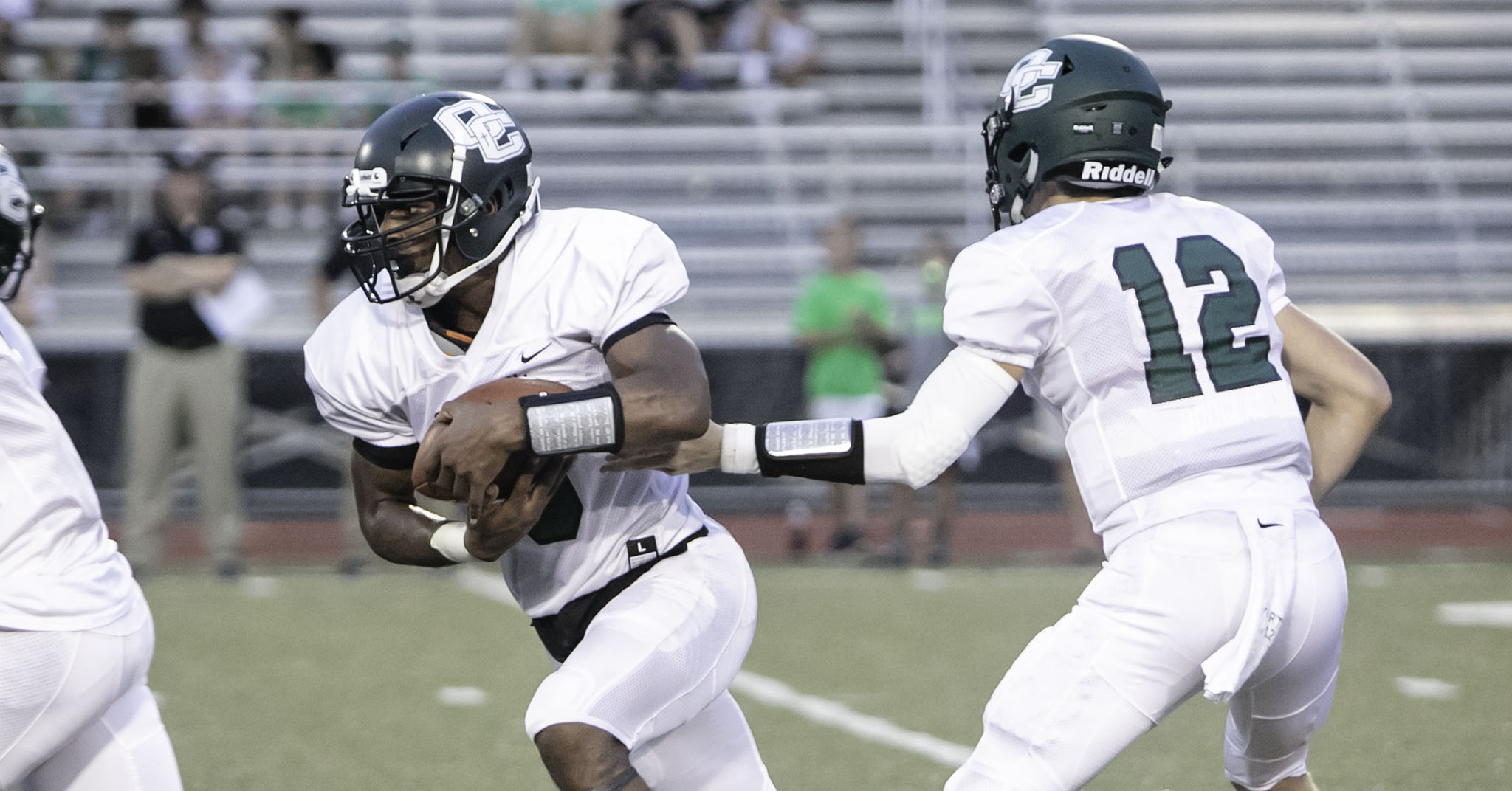 Drew Hartz (12) hands the ball off to Von Williams earlier this season for Owensboro Catholic. | File photo by Ryan Richardson

The Owensboro Catholic football team doesn’t have any plans of ending their season this week, especially not when they’ve got a chance to host one more home game — and against a team they’ve been gunning for all season.

Tonight, though, the Aces (8-3) have to get past a tough Murray (7-4) team that could put up a better fight than they have in recent years. The teams met last year in a game that ended 40-7 in favor of Owensboro Catholic.

OCHS head coach Jason Morris said his team is going to do whatever it takes to get back to the potential third-round state playoff matchup with Mayfield at home.

“Our seniors know there’s one more home game out there for them to play in, but they have to win this week to get there,” he said. “They seem to be really focused this week on making sure they can get to next week and get that chance to play one more time at Steele Stadium.”

Morris said Murray has a group of juniors that have helped the Tigers turn back into a successful program, and he expects it to be a close game.

“They’re kind of like us,” he said. “They don’t really have a bad loss as far as against an opponent they shouldn’t have lost to. They’ve got a really strong record, and their film shows it. It’s going to be a tough game.”

The two have a pair of mutual opponents and have similar results in both contests. Owensboro Catholic beat Todd County Central 50-7 and Webster County 61-15, while the Tigers won 50-14 and 57-7, respectively.

With such similar teams, Morris said it’s going to come down to who can make the fewest mistakes.

“I think the deciding factor in the game is going to be who takes care of the football the best,” he said. “We’re going to have to limit turnovers and penalties and not give them free yardage. The team that is most disciplined is most likely going to win the game.”

Morris said the goal is going to be to make sure the Aces keep the ball in front of them and stop the run. Offensively, he said they have to establish a running game so they can stay balanced.

They’ve rarely had issues with the ground game all season thanks to strong running from Williams, and last week was no different. In a rout of Webster County, Williams took five carries for 111 yards and three touchdowns.

Morris said even though his team tries to stay balanced, Williams is the catalyst for making a deep run.

“We’ve know all year long how we were going to approach the playoffs and what our philosophy would be,” he said. “We’re going to ride Von Williams in his senior year as far as he can take us. We know we’re going to have to run the football each week to be successful, and he’s going to be that main guy for us.”

Should the Aces win, they’ll get their much-awaited meeting with Mayfield (11-0) as long as the Cardinals get by McLean County. Owensboro Catholic has lost to Mayfield three consecutive seasons in the third round of the state playoffs, and they’re hoping to get their revenge at home next week.