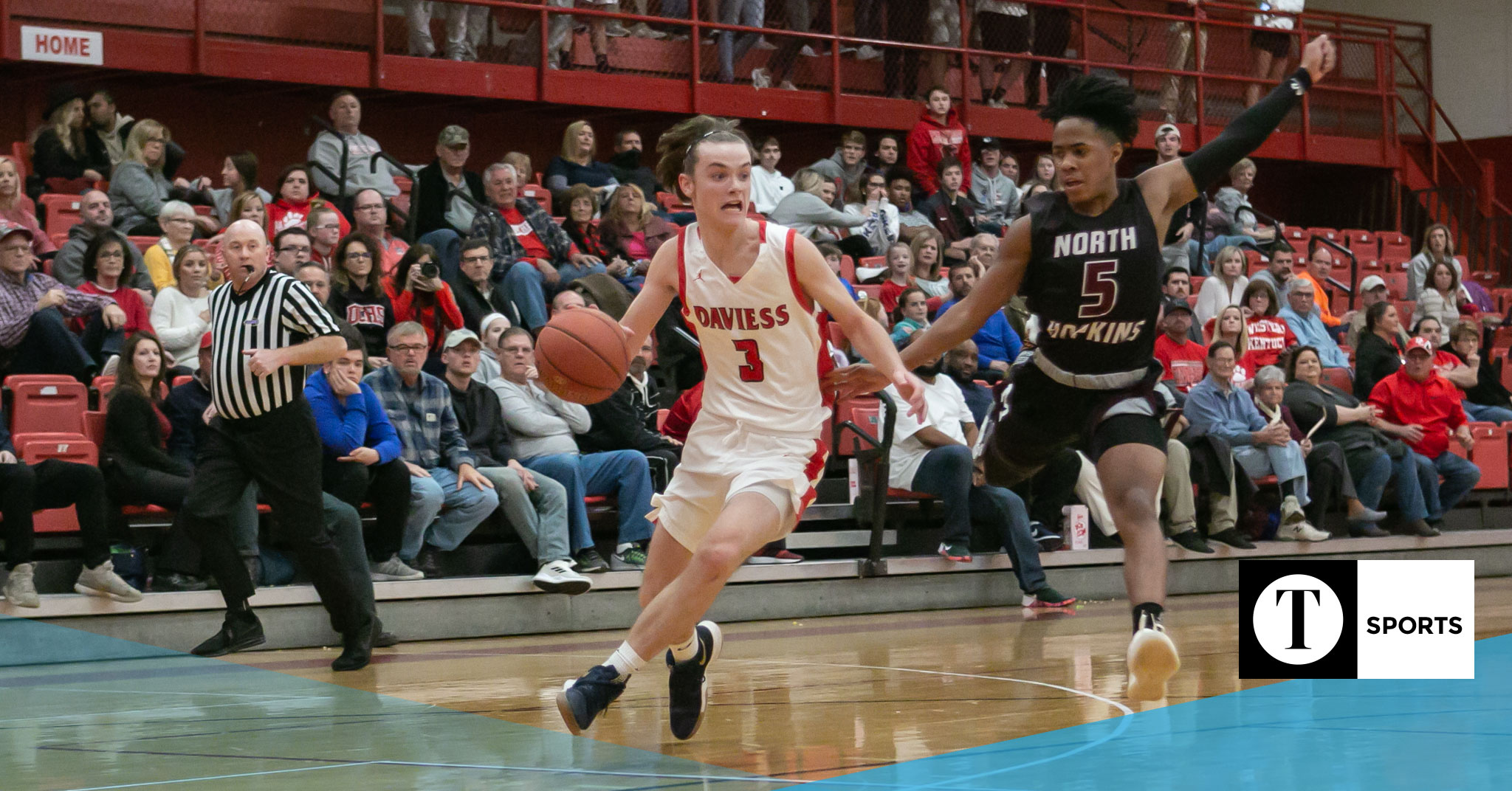 Dakota Walden of Daviess County drives in for a layup against Madisonville-North Hopkins on Tuesday. | Photo by Ryan Richardson

A slim lead disappeared midway through the final period, and the Daviess County boys’ basketball team wasn’t able to come back in Tuesday’s season opening 70-64 loss at home to Madisonville-North Hopkins.

Dakota Walden proved nearly unstoppable for the Panthers (0-1), scoring 36 points, but it wasn’t enough to hold off a late push by the Maroons (1-0).

With a clear size disadvantage, DCHS head coach Neil Hayden said the goal was to keep the ball on the perimeter defensively.

“I thought, especially early in the game, we stuck with our plan of trying to slow them down and keep them out of the paint,” he said. “They have two really big athletes that outsize us so we were just trying to play contain.”

As the final minutes ticked away, though, the Maroons’ defense came up with some big stops, and the Panthers missed some timely free throws.

“Later in the game, they pressured us a little more and turned us over,” Hayden said. “Our guys competed, we just didn’t close the game in the fourth quarter like we would have liked to with our free throws and executing some plays.”

Daviess County fell into a 7-0 hole to start the game, but eight points from Walden in the first quarter helped them close the gap to 16-13.

The first Panther lead came after a steal and layup by Walden, followed by a corner 3-pointer from Mason Payne. The teams traded buckets the rest of the half, and DCHS held a 32-31 lead at the break.

The Panthers went on a 14-7 run over the final four minutes of the third quarter that ended with a Chase Luckett 3-pointer at the buzzer. A pullup jumper by Walden to start the fourth gave DCHS their largest lead at 54-47.

A putback by the Maroons gave them a 59-57 lead with about four minutes to play, and they kept the advantage the rest of the way.

“I think there’s a learning curve the first game of the season,” Hayden said. “(Madisonville) made some plays and turned us over some. I thought we took some early shots, and we got in foul trouble.”

Walden was impressive all night, with at least eight points in each quarter. He also hit four consecutive free throws after a pair of technicals against MNHHS. Those points came late in the third to give the Panthers a lead.

“He competed really well,” Hayden said. “He got in the lane and created for his teammates. They were trying to take him away at the end. I’m sure we’ll see that all year.”

Hayden said the first game gave him a good idea of where the Panthers need to improve, but he’ll have to wait until practice to see how the players respond.

“I told them we’ll find a lot out about them tomorrow,” he said. “In practice, we’ll see where their minds are. I don’t want them to be happy just to compete. We need to close these games.”

Daviess County returns to action Saturday night when they host McLean County as part of the KY 811 shootout.