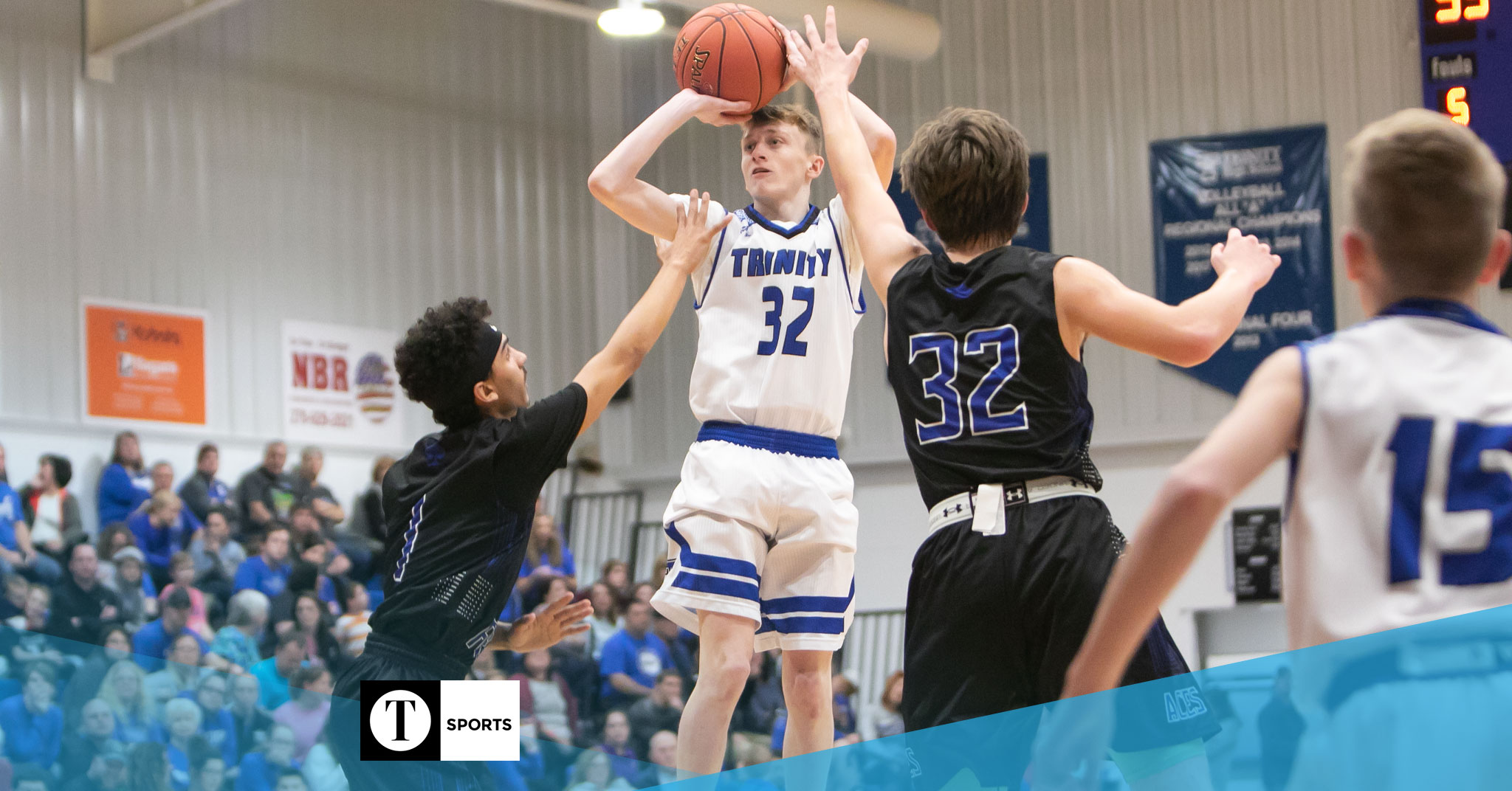 Will Edge goes up for a 3-pointer in Trinity's win over Frederick Fraize. | Photo by Ryan Richardson

The Trinity basketball teams had no trouble getting by Frederick Fraize in a doubleheader at home Monday night. The girls cruised to a 61-21 victory, and the boys followed with a 78-49 win.

GIRLS
All seven players got on the board for the Lady Raiders (9-14) as they used a hot second quarter to pull away early against the Lady Aces (5-20).

Georgia Howard, Cassidy Morris and Morgan Kinsey each scored 4 points to help Trinity take a 14-10 advantage after the first period.

A jumper by Nina Wathen and back-to-back 3-pointers by Josie Aull pushed the lead to double digits, and Frederick Fraize had no answer at the other end. The Lady Raiders limited their opponent to a single point in the second quarter en route to a 28-11 lead at the half.

“(Frederick Fraize) plays really hard,” he said. “All we asked our kids to do was match their intensity. They really frustrated us a lot in the first half. In the second half we told them to settle down and just play. They executed a lot better down the stretch.”

Wathen scored 6 more points in the third, while Morris added 5 of her own as Trinity went up 41-19. Morris closed the game by hitting all five free throw attempts to go along with a jumper and 3-pointer in the final frame.

The Lady Raiders did not allow a basket in either the second or fourth quarters. They hit 9-of-11 free throws in the fourth, and Morris finished 8-of-9 at the line.

“We feel like our kids can shoot the ball,” he said. “They are very intelligent and they make the easy pass. Overall what I’m pleased with is we’re getting better.”

BOYS
Much like in the girls’ game, the Raiders (13-11) used the second quarter to open up a big lead, and they got scoring from 13 players, while the Aces (0-24) remained winless on the season.

Trinity only held a 14-9 lead at the end of the first quarter, and head coach Nathan West said it was mostly due to playing more post players at once in honor of senior night. Once they returned to their normal set, it didn’t take long to pull away.

“I thought we had a more efficient lineup (in the second),” West said. “We were playing our seniors and we had a lot of big guys out there. Once we got our regular lineup in we got into a better flow and it kind of went from there.”

Trenton Morris and Joe Brown combined for 9 points in less than a minute early in the second, and the Raiders held a double digit lead the rest of the way. Will Edge scored the final 6 points of the half to put Trinity up 39-23 at the break.

“They tend to know who needs it more than I do,” he said. “They’re a pretty close group so they kind of take care of each other. We try to get them all involved if we can.”

Morris led with 15 points, Edge added 11 and Brown finished with 9.