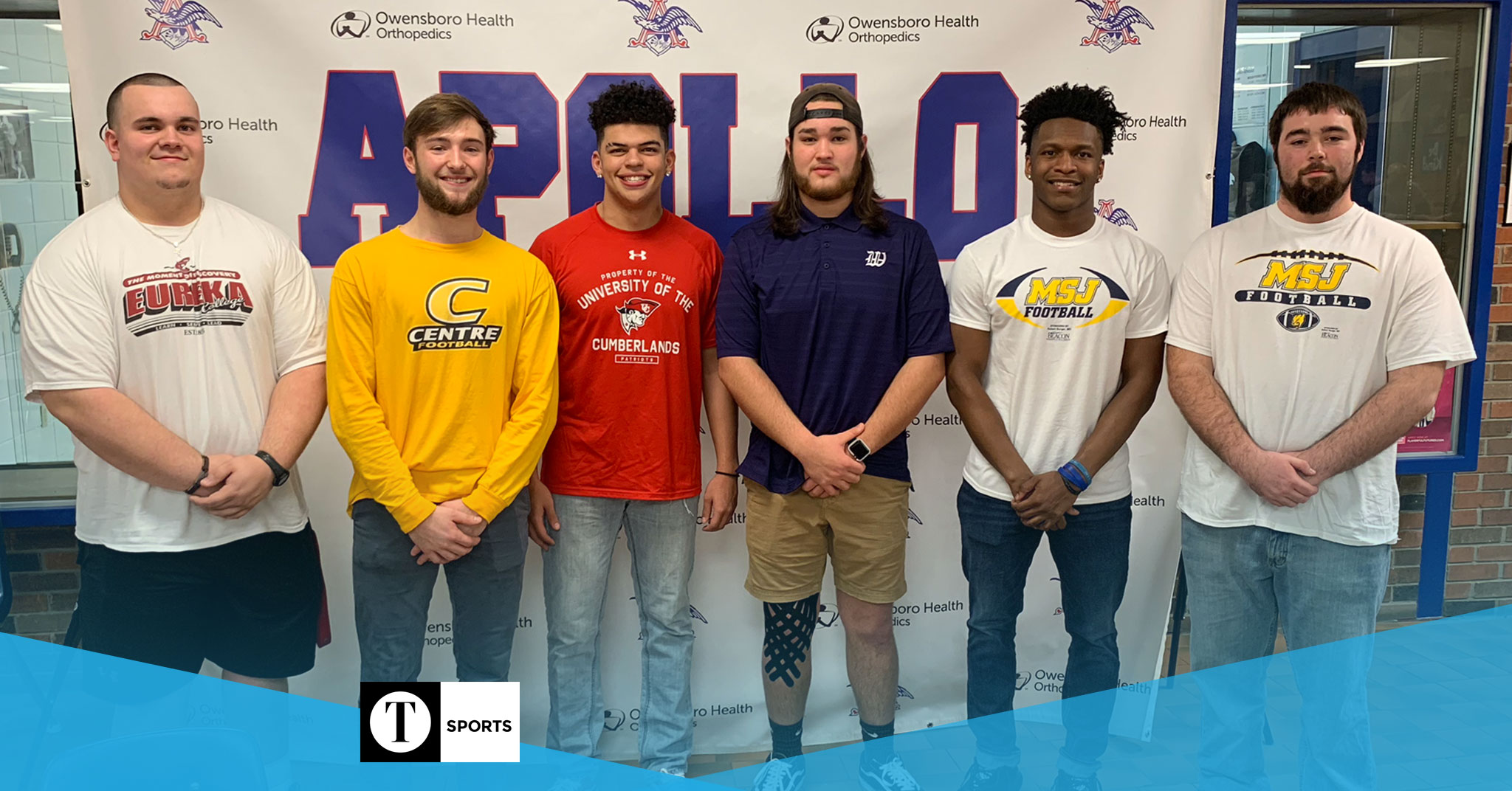 Six players from Apollo announced their plans to continue football careers at the next level on Wednesday.

Head coach Phil Hawkins, after his first year at the helm for Apollo, said it’s great to see a big group move on to the next level.

“I think that any time you can help kids further their education and allow them to play the sport they love, that’s magic for us as adults to see that through,” he said. “Any time you can get mass kids to sign that letter knowing they are going to have an opportunity, it just makes it that much better.”

In their final year, the six players helped Apollo get off to a 4-0 start that included a win over Evansville Mater Dei in the Border Bowl in week two.

Hawkins said while winning is important, having players successful enough to earn scholarships is also a major victory for the program.

“I take so much pride in sending these kids off to college that for me, this like winning a regional title to me,” he said. “Of course it’s important that we win games and that’s the future of Apollo, but right now, we just won a regional championship by signing six guys. It may not have been a KHSAA’s football regional final, but it’s a regional final in their life for sure.”

DC Boone | 6’1” | 320 lbs | Offensive Line
Eureka College Red Devils | Eureka, Illinois
Boone was a big presence up front for the Eagles, and his strength showed both on and off the field. He also had great success as a powerlifter. Boone got within 5 pounds of the state bench press record (435) as a junior, and will have the chance to break it again in March.

Playing at Apollo: To me, it meant everything. I couldn’t have picked a better high school to go to, better coaching staff or better group of guys to just grow with.

Being able to sign: It’s crazy to think four years ago I was just a little freshman. I didn’t even want to play college football. This morning, I called and said I wanted to go to Eureka and we got everything set up.

Why Eureka: They have a great football team. They’re on the rise. They have great coaches. It just felt like home when I went up there.

Hawkins says: DC is clearly the strongest high school player I’ve ever had, by far. He’s a physical field on the field. Off the field, he’s one of the nicest guys you’d ever want to meet. He’s almost like a big teddy bear away from the field. But he’s very physical, and once he gets his hands on you, he’s pretty good at pancaking people. I’ve had a blast having him because he’s anchored that offensive line.

Gage Hayden | 5’11” | 165 lbs | Cornerback
Centre College Colonels | Danville, Kentucky
In his final two seasons, Hayden had 112 tackles, 7 interceptions (2 returned for touchdowns) and 2 fumble recoveries. While most of his success came on the defensive side, Hayden also contributed to the offense. He had 25 receptions for 413 yards and a touchdown this season.

Playing at Apollo: It was some of the best years of my life. I got to learn a lot from the coaches and players. Overall, it was just a great experience.

Being able to sign: I wouldn’t say it was a dream of mine starting off, but as time went on and I realized it possible, it really opened up my eyes. I couldn’t be more excited.

Playing at Centre: It was my dream school. I like the fact they are a private school and are really small. They’re really big on the study abroad program. It was a fit for me.

Hawkins says: He is probably the leader of our defense. He’s very capable on both sides of the ball and is one of the team leaders. He’s very bright and has high academics. He’s going to fit in great at Centre. He’s the kind of kid they like to sign.

Mariano McKenzie | 5’10” | 175 lbs | Running Back
Mount St. Joseph University Lions | Mount Saint Joseph, Ohio
McKenzie was tough to stop out of the backfield in both his junior and senior seasons. In 2017, he had 177 carries for 1,000 yards and 8 touchdowns, then followed it up with 179 rushes for 1,337 yards and 14 scores as a senior. He could make an impact early on in college.

Playing at Apollo: It’s taught me to be accountable. It gave me a lot of experience playing on a team where my role was very important. I’m used to everybody leaning on me and I had to step up and be a leader to get the job done.

Being able to sign: It was my dream to play college ball. It doesn’t matter what level you play at, it’s about getting the education. If you can ball, you can ball.

Playing at MSJ: They gave me a chance so I took it. Their staff connected with me and talked to me all the time. I could tell as soon as I stepped in the doors that’s where I wanted to be. I’m going to grind every day and work to get a spot on the field.

Hawkins says: He’s got a lot of accolades and has been very popular in this part of the state. He proved that on the football field this year and helped us out in some spots where we needed him. He’s going to be successful at the next level. I know they are really excited about getting Mariano. He’s got enough athletic ability where he may see the field early.

Quentin Miller | 6’1” | 235 lbs | Defensive Line
Kentucky Wesleyan College Panthers | Owensboro, Kentucky
Miller bounced back and forth on offense and defense for the Eagles through his four years and had to battle injuries. As a junior, he scored 1 touchdown and had 52 tackles. In his final year, Miller had 72 tackles (11 for loss), 8 sacks and 1 fumble recovery.

Playing at Apollo: It’s been crazy. Being a four-year starter and going back and forth from offense to defense has been fun.

Being able to sign: I’m excited for it. It’s been a dream of mine since I was younger. I’m looking forward to playing.

Playing at Wesleyan: I wanted to stay in town and it just worked out. I don’t know if I’m going to redshirt or not yet because of my knee surgery.

Hawkins says: He’s probably the most physical kid we had on our team this year. I know they are excited to get him over there. I think they’ll look at him in some different spots. He’s going to fit at that level and provide some good reps for them in the future, maybe immediately. He’s been a joy to be around, and he’s helped out program.

Sam Parm | 6’1” | 200 lbs | Safety
University of the Cumberlands Patriots | Williamsburg, Kentucky
Parm was a threat on both sides of the ball, and especially made contributions over his final two years. Between his junior and senior seasons, Parm had 6 touchdowns and 765 yards combined as a running back and receiver. He also had 45 tackles and 8 interceptions (2 returned for touchdowns).

Being able to sign: It’s everything. It’s been a dream since I was a little kid.

Playing at Cumberlands: They had a nice brotherhood there. They were so welcoming, the coaching staff was awesome, and it’s a beautiful campus.

Hawkins says: Cumberlands will love him. He’ll be one of the most athletic kids they get. He was one of the most athletic kids we had and he could do about anything, and they’re aware of that. They’re looking forward to identifying where he best helps them. He’s worked hard to get himself prepared academically, and I’m really excited for him. I’m going to miss him, for sure.

Chris Schwartz | 6’0” | 235 lbs | Defensive Line
Mount St. Joseph University Lions | Mount Saint Joseph, Ohio
Schwartz had to fight through multiple injuries over his years at Apollo, but each time he came back ready to play. Schwartz played on both sides of the ball, and he had 51 tackles and 1 fumble recovery as a junior. In his final season, he recorded 35 tackles (4 for loss).

Playing at Apollo: It was really special for me. We had a lot of ups and downs. I’ve had to fight injuries and had surgery. It taught me to fight back. These coaches showed me had to be a man.

Being able to sign: It’s really special. I didn’t know if I was going to have this opportunity four years ago. To be here now means a lot.

Playing at MSJ: I felt really welcome there. Hopefully I can help them win a few conference championships and contribute a few tackles here and there.

Hawkins: He’s the kind of guy they love up there. They like a down to earth, country boy that’s steady as you go, good academically, and is going to play hard. That’s exactly what Chris is. He was a great lineman on both sides of the ball. We never had to worry about him doing what we needed him to do. He’s a great example of academic success and they’re going to really enjoy him.