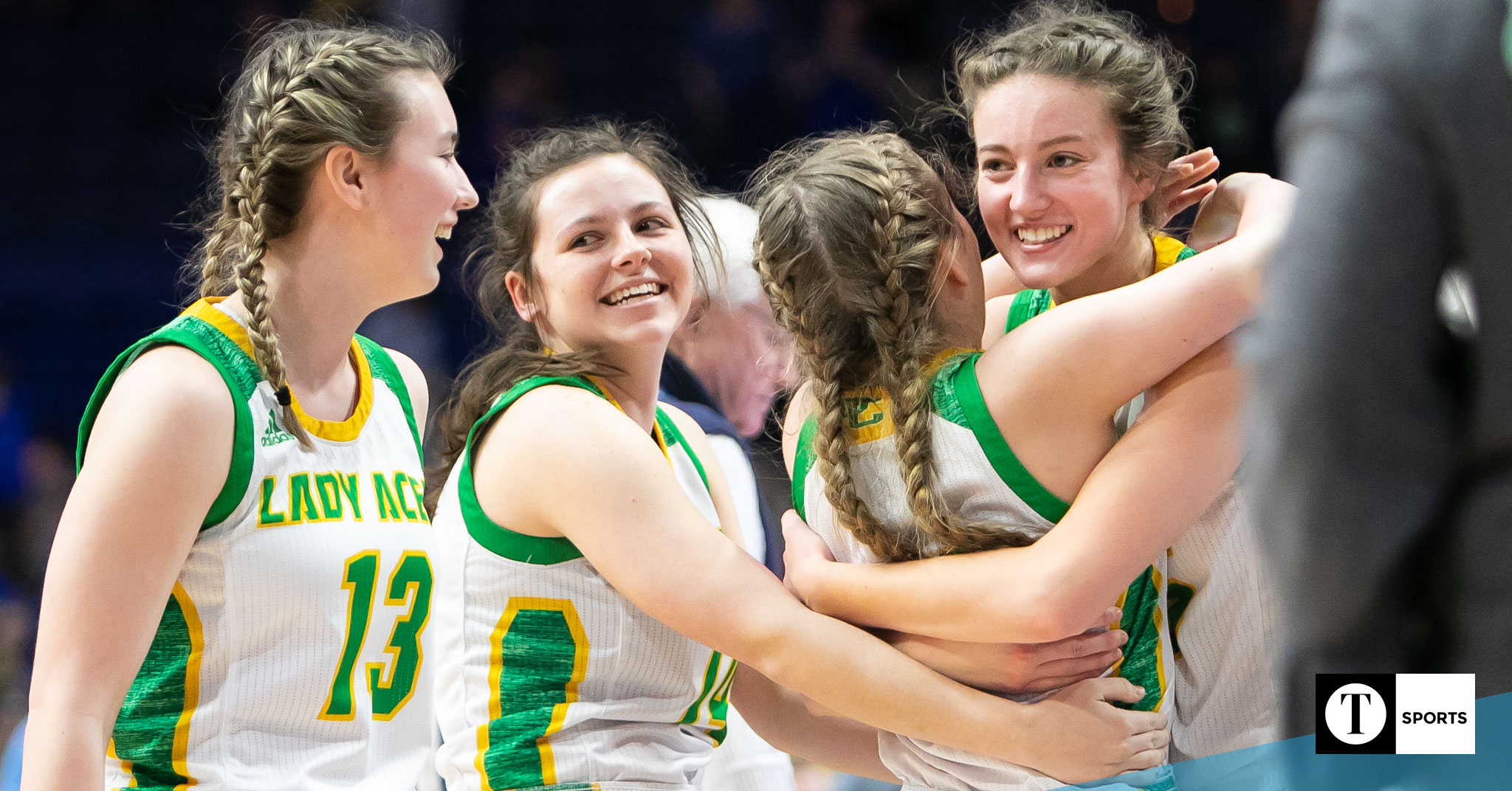 The Owensboro Catholic girls' basketball team is headed back to the quarterfinals of the state tournament after a win over Bethlehem on Wednesday. | Photo by Ryan Richardson

The Lady Aces are in the state quarterfinals for the second year in a row.

It was a slow start all the way around, and a back-and-forth fight came down to the final couple of possessions, but the Owensboro Catholic girls’ basketball team had just enough to get by Bethlehem for a 53-47 win. Catholic advances to play Scott County (34-1), who cruised to an 87-61 win over Knott County Central (25-8) in the first game.

Wednesday’s opening-round game of the KHSSA Girls’ Sweet 16 State Tournament between the Lady Aces (28-7) and Banshees (29-5) featured 10 lead changes and eight ties, though Catholic held the advantage for nearly half the game.

They struggled to pull away though, as Bethlehem got plenty of second-chance opportunities. The Banshees converted 18 offensive rebounds into 21 second-chance points, compared to only eight for 12 by the Lady Aces.

Catholic head coach Michael Robertson knew his team might have a tough time on the boards.

It was slow going for both offenses early on, as they combined to go 5-for-26 from the field in the opening period. Catholic’s Sarah Beth Clemens hit a 3-pointer and converted a layup and-1 in the final minute for a 9-4 lead.

The Lady Aces held a slim lead for most of the second thanks to 6 points from Mackenzie Keelin and 4 from Hannah McKay. Bethlehem knocked down a 3-pointer with 17 seconds left in the half for a 20-19 lead at the break.

“I think it was nerves,” Robertson said of the slow start offensively. “We really shot a lot better in the second half. I thought we were getting clean looks, we just missed some shots early.”

Scoring picked up for both sides in the third period, starting with a quick 3-pointer by Keelin. Bethlehem took their largest lead of the game at 25-22 on a tip-in with 6:21 left in the quarter before Madelyn Lyon answered with a short bucket.

The Banshees again went up by 3 on a triple with 1:54 to play in the third, but Keelin drained another 3-pointer of her own to knot the game at 35 heading into the final period.

“Once we calmed down and played like we usually do, our shots started to fall,” Keelin said.

After McKay converted an and-one on a putback for a 38-37 lead early in the fourth, the Lady Aces never trailed again.

Keelin said they dug in over the final eight minutes to gut out the win, and finally getting the rebounds they needed was key.

“Our focus of this game was to box out and rebound,” she said. “There were times we didn’t do as well, but towards the end of the game we really stepped it up and rebounded like we should have.”

Catholic couldn’t quite close the door early, as they missed four consecutive free throws with a 51-47 lead in the final minute, but the Banshees weren’t able to make a shot. Robertson said playing against a tough opponent, he still couldn’t relax until the buzzer sounded.

“(Bethlehem’s) heart goes a long way,” he said. “I was really impressed with the way they played. They don’t give up. I didn’t feel good until the final horn went off.”

Keelin finished with a game-high 15 points, while McKay added 14 and Clemens had 10. McKay and Lyon each led the Lady Aces with 9 rebounds.