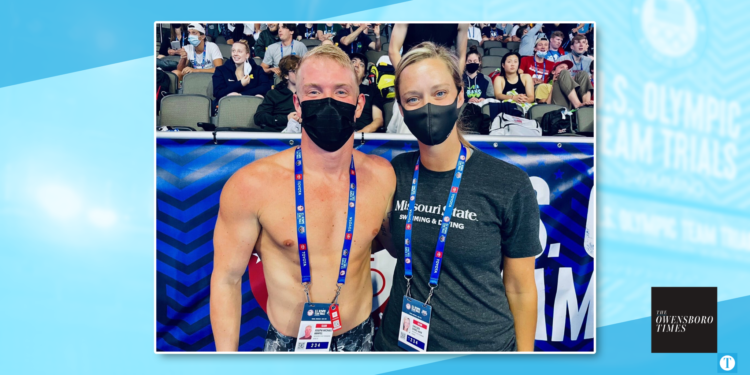 Local swimmer Michael Hampel participated in the Olympic Trials recently, a first for any swimmer from Owensboro.

The Owensboro native was tasked with navigating through a pandemic that forced him to train without a pool on countless occasions.

Hampel attends Missouri State University (MSU), where he will use one more year of athletic eligibility to complete a Master’s Degree in Sports Administration. His most recent college season was ladened with quarantines and restrictions that left him feeling “behind.”

“We were jumping around with protocols and had several stoppage points — my roommate and I were quarantined for a month at one point that spanned from August to September,” Hampel said. “It was tough, more mentally than anything else. Being out of the water for that long was hard on me; we resorted to bodyweight activities and used stretch chords in the apartment that allowed us to stay in shape.”

That form of “barbaric” training was no stranger to Hampel, who spent nearly the entire summer confined to his parent’s home when the pandemic was reaching its peak. Because of pool closures, he went 70 days last summer without even swimming a lap.

“Being out of the pool for that month as well as the 70 days during the summer definitely took a toll on me,” he said. “That, paired with my college season, was the toughest training block of my career. The inconsistency and lack of racing left me wanting to play ‘catch-up’ all year.”

Whether it be in his parents’ garage with weight apparatuses or in a pool when they finally opened, Hampel leaned on long-time friend and high school teammate Charley Hall as a training partner. Hall was recently crowned Division III All-American at Franklin College.

“We grew up training together and used the summer as an opportunity to do it one last time,” Hampel said. “I credit so much of my success to him — he made the COVID summer of being home much more enjoyable.”

After being delayed for nearly six weeks, Missouri State’s conference meet concluded on April 10. Hampel and the staff at MSU took six short days off and dove right back into speed training in preparation for the trials.

Fast forward to the second week of June, and Hampel was participating in the Olympic Trials in Omaha, Nebraska. Although the shortened sessions forced him to rely on his training from the fall and spring, Hampel was pleased with his performance.

“It’s everything I’ve ever wanted to do and more; it was an electric experience that I can’t even describe,” Hampel said. “It’s the pinnacle of what I wanted to do in my career since I was 11 years old, and to finally be at that meet and mecca of the sport was awesome.”

Hampel missed his personal best by a split second and thought there was room for improvement on his execution.

“I swam as well as I could,” he said. “I knew going in that I was a long shot to be on that Olympic roster, so I just wanted to have fun and enjoy the experience.”

Hampel presently serves as an assistant coach with the Missouri State Aquatics club team, a program committed to helping young athletes become better swimmers and individuals. After obtaining his graduate degree, he has aspirations to enter the coaching realm and share his experiences with young swimmers.

“I think that swimming at a young age has given me a ton — self-confidence, believing in yourself, and being comfortable in your own skin,” Hampel said. “Coaching is the most rewarding thing you can do; having a hand in someone’s success, instilling those beliefs, and bringing out the best in someone — sports is the best way to do it.”