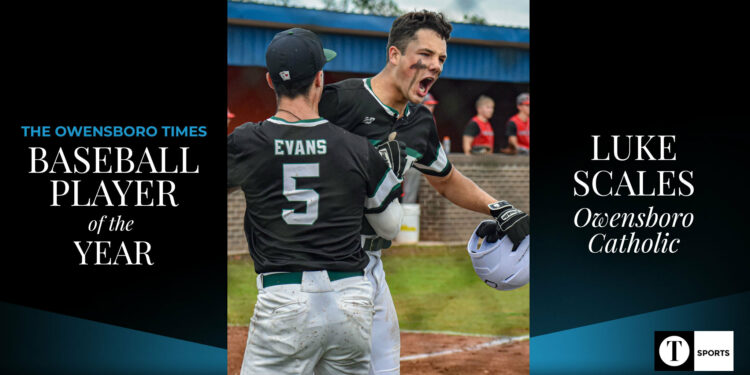 After helping Owensboro Catholic to its first 3rd Region Championship since 2005, Luke Scales has been named The Owensboro Times 2021 Baseball Player of the Year.

Scales was a crucial cog in the Aces offense, supplying them with a plethora of hits and RBIs in the heart of their order.

The soon-to-be senior was used to being on base, hitting .490 on the year. Scales also sent six long balls over the fence, drove in 37 RBIs and stole 25 bases.

Head Coach Derek Hibbs said that when he’s in the zone, Scales is hard to stop because of his ability to cover all areas of the plate.

“He is a complete hitter who is great at taking what a pitcher gives him and applying an appropriate swing. If a pitcher makes a mistake, he doesn’t let him get away with it and drives it for extra bases,” Hibbs said. “If a pitcher executes a good pitch, Luke makes adjustments and gets the barrel to the ball to spoil it. He has great hands and feel for the strike zone at the plate. When he is rolling there aren’t many options pitchers can go to prevent him from making solid contact. He also is a great baserunner, has great hands on defense and has one of the strongest arms on the field.”

Scales said that growing up around the game and watching people like Stewart Ijames and Cole Sturgeon who were at Owensboro Catholic and have played collegiately and professionally is what molded him into the player he is today.

Scales has certainly followed in their footsteps, leaving his mark on the program for years and most recently helping lead the Aces to a 32-6 record, with the year wrapping up against Lyon County at semi-state.

“We wanted to make it to All-A State, which we accomplished,” Scales said. “And we had a big goal of winning All-A State because we hadn’t done that in a long time and we accomplished that. That was one of the biggest things. That’s something we can tell our kids when we get older.”

Scales has played with Owensboro Catholic’s varsity team since he was in seventh grade, but Hibbs said his hunger to get better never varies.

“Even though he has been locked into the lineup for that long, he is never satisfied with his current standing as a player and constantly works to improve his game wherever he can,” Hibbs said. “I don’t know too many days that go by where he doesn’t hit, throw or field in some capacity.”

While Scales is oozing talent every time he steps on the field, Hibbs said that his biggest impact comes from the type of teammate and leader he is.

“His best attribute may be the value he brings as a teammate. He is always positive and looks to motivate others on the team for us to continue to compete at a high level,” Hibbs said. “He is also very humble and doesn’t let any success affect him. And all the success he has had is directly due to his own work he has put into the game.”

Scales is thrilled to receive the Player of the Year honor, but knows that without his teammates, he wouldn’t have gotten it.

“I’m just so grateful that all the hard work has paid off,” Scales said. “But one thing is for sure, you can’t do it without your team. You know you have a bad day and you’re looking for somebody to look to for help and your team is right there for you. Our team is just so close. We’re like family.”

Now Scales is taking the time in the offseason to prepare for the one thing on he and his teammates’ minds—returning to playoff baseball and winning a state championship.