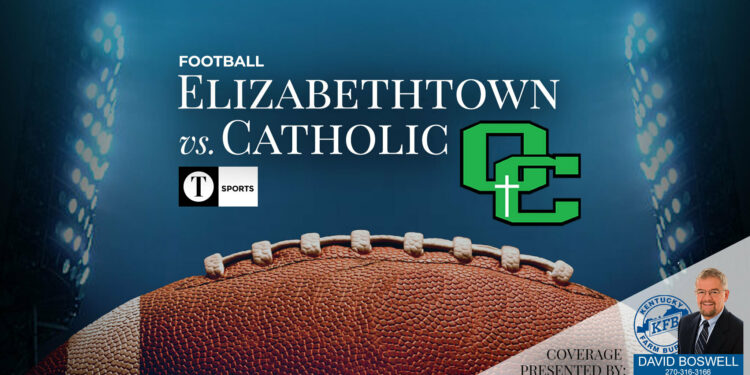 Owensboro Catholic football is looking to extend its winning streak to five games on Friday, closing out a two-game road stand against Elizabethtown.

The Aces are coming off a dominant road win against McLean County, blanking them while having a fiery offense to win 46-0.

Freshman quarterback Brady Atwell had a strong week filling in for senior quarterback Lincoln Clancy, throwing for 209 yards on 15-24 passing to go along with four passing touchdowns and a rushing touchdown. His primary target was senior Braden Mundy, who earned 170 receiving yards and three touchdowns on 12 catches.

Meanwhile sophomore Hunter Monroe was helping solidify Owensboro Catholic’s ground game, rushing for 132 yards and two touchdowns on 10 carries. With a focus on ball security in practice this week, the Aces are hoping to have its fifth straight game of at least 36 points.

Defensively they will be tasked with an Elizabethown that has scored 48 points in its last two games. They are led by dual threat junior quarterback Ryder Gregory, who averages 130 passing yards and 50 rushing yards a game to go along with around two passing touchdowns a game.

His backfield opens up the game through the air for him, as sophomore Trey Durbin (84.3) and senior Greg Hall (73.1) combine for about 150 rushing yards per game.

Owensboro Catholic knows that this game will not be a cakewalk by any means and Head Coach Jason Morris said that it can be a valuable experience as the playoffs are nearing.

“We are expecting this week to be a similar type of opponent to what we experience when we play deep into the playoffs,” Morris said. “This will be a great game for us going into the playoffs. Elizabethtown has lots of tradition and they are not lacking speed, size, or athleticism. They are a very solid 3A football team.”

With poor weather being a concern for Friday’s matchup, Morris said they’ve worked on ball security and finishing tackles this week in practice.

Morris said that as long as they execute their defensive keys and limit turnovers offensively, they can grab a win against a very formidable opponent to gain more momentum going into the playoffs.

The two teams will battle it out at Elizabethtown, as Owensboro Catholic takes on the Panthers at 8 p.m. on Friday.