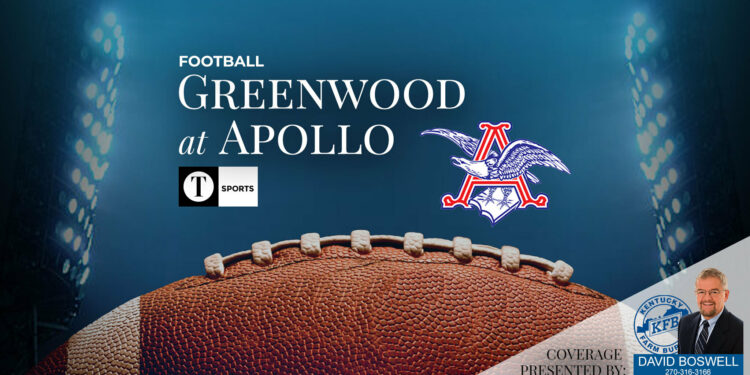 The Eagles will look to bounce back from a loss to Daviess County in front of its home crowd against Greenwood on Thursday.

Apollo is coming off a tough loss to the Panthers, falling 43-21 in a game in which they had the chance to claim the district regular season title.

The Eagles were held to 116 rushing yards in that game and junior quarterback Christian Combs struggled under center.

Combs threw for 173 yards on 13-23 attempts, while also throwing two interceptions. He also wasn’t able to gain any ground scrambling out of the pocket as usual, rushing for negative four yards on four carries.

Defensively they will look to turn it around as well, as they had gone two straight games of allowing 20 or less points for opponents before playing the Panthers.

Meanwhile Greenwood has had some struggles late in the season, riding a two-game losing streak after starting the season 7-1.

The Gators are led by senior James Salchli under center, as he averages 127 passing yards and a touchdown a game. Ira Matheos is his primary target, averaging 54.7 receiving yards per game.

“Greenwood is a wing-t offense,” Head Coach John Edge said. “We need to get them off the field so our offense can get some possessions.”

Edge and company know they have an all-out battle ahead of them on Thursday night with Greenwood who is hungry to snap its losing streak.

“Greenwood is going to be a tough opponent,” Edge said. “They are very big and have athletes that can make plays”

They’ve focused on a number of players offensively and defensively in scouting, making sure they know what they can do to contain them.

“Ira Matheos, Tel Tel Long and Lofton Howard are big playmakers,” Edge said. “We need to know where they are at all times.”

Edge said that if they can put the Daviess County loss behind them and limit turnovers and silly mistakes, they’ll be able to come away victorious against the Gators.

Apollo will look to bounce back with a win on senior night when they hit the gridiron to take on Greenwood at 7 p.m. on Thursday.