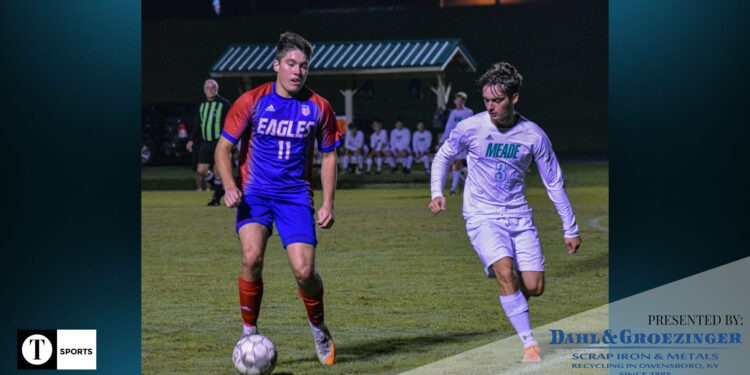 The Eagles set themselves up for another rematch with Daviess County in the 3rd Region Championship game, using a strong second half to defeat Meade County 5-1 on Tuesday.

Apollo came out the gates aggressive, looking to create ample opportunities offensively. They did so throughout the first half, but we’re struggling to get a clean look deep in the box.

It wasn’t until junior Teranse Twihenya used a little trickery with his ball handling that the Eagles were able to find the back of the net.

Twihenya used his left foot to hold the ball before cutting back to his right and shooting one to the far post, just barely hitting the fingertips of the keeper before finding the side net.

This shot to take a 1-0 lead in the 32nd minute was the lone goal of the first half, sending Apollo into halftime in charge.

Head Coach Ryan Poirer gave credit to Meade County’s sophomore keeper Mason Powers for limiting them to just one goal in the first half.

“[There were] a couple that probably should’ve finished a little bit better, but you gotta give him credit,” Poirer said. “He made saves on some shots that probably most of the time are going in. I thought he played really well to keep them in that first half.”

With this in mind, Apollo tried to switch up their tactics offensively to find the back of the net more often in the second half while reminding his team to stay aggressive as the game progressed.

“The main focus was maybe keep them a little bit lower,” Poirer said. “He’s a big dude, maybe try to go a little bit lower on him. [We] hadn’t really tested him too much low… Also, don’t drop off just because we’re winning… I was like ‘guys don’t let them come back.’ If you get a chance to put them away, put them away. I think they took that to heart.”

The Eagles continued to apply pressure in their offensive third to open up the second half and it paid off. Senior Harrison Bowman corralled the ball in the middle of the box as Meade County tried to clear it, ultimately shooting off the left post and in to take a 2-0 lead in the 44th minute.

Less than a minute later fellow senior Houston Collins received the ball with room to run on the left side, using his left foot to find the side net and take a 3-0 lead for the Eagles.

Meade County was finally able to break through in the 49th minute, as sophomore Peyton Johnston’s shot ricocheted off of an Apollo defender and into the goal to cut it to 3-1.

The Eagles responded in the 67th minute, as junior Hsa Than corralled the ball near the middle of the box after it was deflected before scoring and making it 4-1.

Less than a minute later a penalty kick was drawn, which senior Elbert Moo proceeded to make and give Apollo a 5-1 lead.

“I was really happy with the offense today,” Poirer said. “I thought the ball movement was really good, the chances were really good.”

Now the Eagles will look to turn their fortune around against Daviess County, having fallen to them three times this season—most recently by a score of 10-0 in the 2nd District Championship.

Apollo and Daviess County will hit the pitch at 6:30 p.m. on Thursday, with one team ultimately having their season end while one will hoist some hardware.