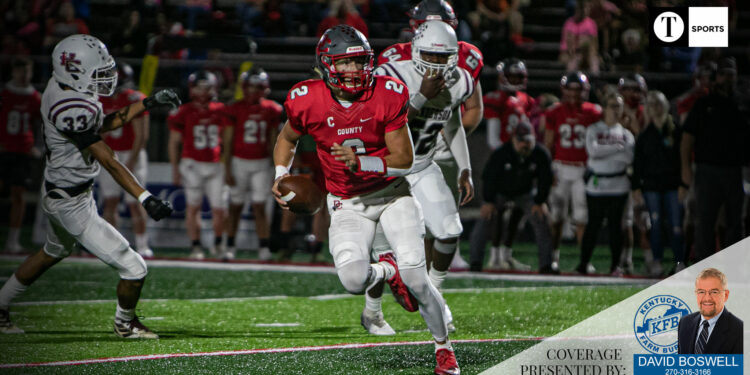 The Daviess County Football program used an explosive second half to pull away from Henderson County at Reid Stadium on Friday night. The Colonels gave the Panthers all they wanted early, forcing a defensive showdown for most of the first half.

Daviess County (7-1, 3-0 district) secured critical stops on third and fourth downs down the stretch and used a versatile attack on the offensive end to keep the Colonels on their toes. Gunnar Evans played a significant role for the Panthers on both sides of the ball, securing monumental tackles and carries with the game on the line.

“I think Henderson did a good job of testing us tonight and getting us out of our comfort zone,” said Daviess County head coach Matt Brannon. “I don’t think Henderson has been at full speed for at least a month, and they’ve finally hit stride. It’s turned into a rivalry, so to speak, and with them coming off a loss, we knew we were going to get their best game.”

Henderson County (5-3, 1-2 district) relied heavily on the run, with Jordan Wright tallying 110 yards on the ground. Turner Mattingly led their receiving core with one touchdown on 62 yards receiving.

“He showed a lot of versatility tonight, and that’s exactly what we need him to do,” Brannon said. “We have to continue to do a better job picking up blitzes because I think we’ll see that again.”

After eight minutes of scoreless football, the Colonels jumped on the board first when quarterback Seth Goben connected with tight end Turner Mattingly across the middle. Daviess County took less than a minute to respond when Joe Humphreys found Max Dees down the sideline for a score followed by a successful two-point conversion.

After an 8-6 first quarter, the Colonels grabbed the first points of the second quarter with a field goal. Mere seconds later, Humphreys connected with Isaiah Tomes on a slant across the middle that he took 70 yards for a touchdown, making it 14-9 with 7:30 remaining in the half.

The Panthers got off to a rough start in the second half, fumbling the opening kick-off on their own 5-yard line. That set up a three-yard touchdown run for Jaheim Williams, followed by a successful two-point conversion, giving the Colonels a 17-14 lead and what would be their final score of the evening.

Decker Renfrow wasted no time retaliating, returning the ensuing kick-off more than 45 yards and setting the stage for another Tomes touchdown. The Panthers kept the accelerator on, forcing a fumble on the subsequent kick-off to set up a 37-yard Sean Higgs field goal, extending their lead to 24-17.

Still leading by a touchdown, Daviess County secured a big stop on third and 11 with under six minutes remaining, forcing the Colonels to punt. After taking nearly no time off the clock, Humphreys evaded pressure on third and 10 to take it 73 yards to the house.

The Panthers tallied another stop, this time on fourth down near the fifty-yard line. They followed with a 45-yard run by Gunnar Evans that set up another Humphreys to Dees touchdown.

Humphreys totaled game-highs in touchdowns with four, rushing yards with 118, and passing yards with 234. Evans followed with 59 yards on the ground while Isaiah Tomes led all receivers with 94 yards. He and Dees both finished the evening with two touchdowns.