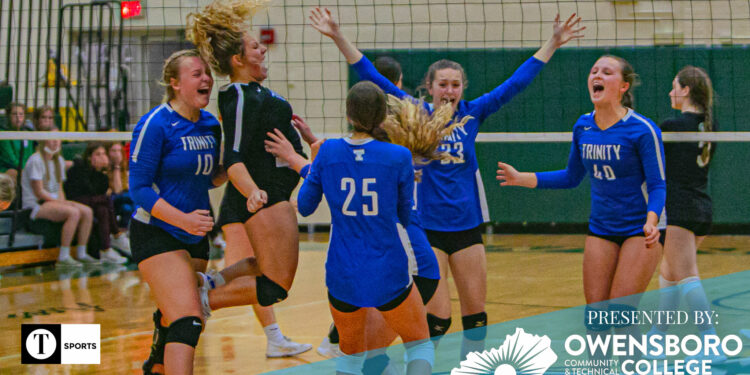 Trinity was one point away from their incredible season ending Wednesday night. Instead, the Lady Raiders are headed to the volleyball region championship for the first time in program history, also setting a handful of other records in the win.

Tied 13-13 in the fifth set, a misplayed bump by Trinity gave Meade County a match point. The Lady Raiders won the next three to close out the match and make history.

“I’m overwhelmed emotionally and physically right now, but I know that I’m super proud of the girls,” said Head Coach Daniel Morris. “We’ve never made it to a volleyball regional championship before. That’s one thing we’ve preached about was being history makers, and we’ve been history makers all year long.”

Morris said despite now being 27-5, they’ve had their backs against the wall year long.

“We’re a school of 100 students on the dot. Most everybody’s gonna call us the underdogs,” he said. “At no better opportunity right there when we have our backs against the walls facing match point just to come out and score three more to prove we belong. I thought we played extremely well down the stretch with trying to handle our emotions and getting everybody in check and wanting it.”

Trinity started the night out by rolling through the first set with ease. The second set was unfolding the same way, with the Lady Raiders building a 19-11 advantage. Meade County went on a 10-2 run and fought off a set point before evening the match at one set each.

“Meade County warmed up,” Morris said of the sudden change in momentum. “They covered blocks extremely well, they had touches. They just changed things around.”

Trinity again pulled in front early in the third frame and held a 24-19 lead. The Lady Waves rattled off seven straight points to help them come from behind to steal another set.

The fourth was in danger of another blown Trinity lead, but this time the Lady Raiders used some strong play at the net to even the match at two sets each.

“I think once the second and third set was going we had that deer-in-a-headlight look,” Morris said. “We started to panic a little bit. But we eventually settled and we were the aggressors.”

The Lady Raiders aren’t settling for just being in a championship match for the first time.

“It means a whole lot just to get this far,” Morris said. “I know we have wanted it all year long. We’ve talked about not settling with a district championship, and we’ve wanted to go bigger. Now, there’s no better way than to just go big. We’re going to want it and we’re going to come out fighting.”