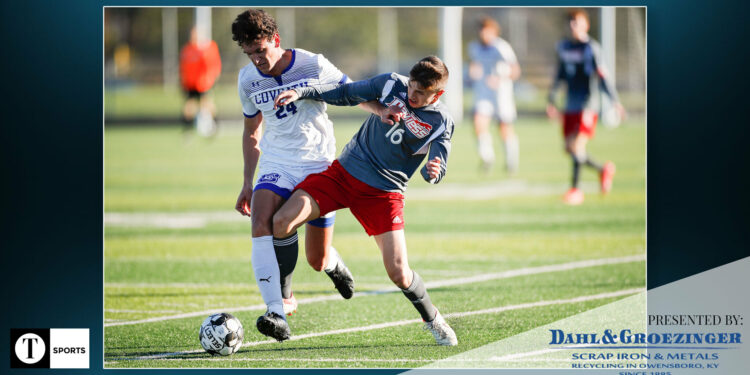 Daviess County boys soccer couldn’t convert on its plethora of corner kicks on Wednesday, as they fell in the state semifinals to Covington Catholic 1-0.

Neither team was really able to get much going throughout the first 25 minutes of play, as both teams kept trading counters without getting any shots.

It wasn’t until some great passing from seniors Carson Thomas and Tanner Anderson led to a good look for junior Sean Higgs in the 31st minute, but it was saved by the Covington Catholic keeper.

The Colonels took advantage of this, as less than a minute later Covington Catholic they earned a free kick. After the ball was struck into the box senior Aiden Hemmer sprung forward and headed it to the near post, as it fell past senior Daviess County keeper Cody Clark to give them a 1-0.

“We just didn’t have the size to match up with them there, so we talked about being a step ahead of them and getting to the ball first on those,” Sandifer said. “On that occasion that guy got ahead of his mark and was able to basically just redirect it into the goal off his head.”

The Panthers were able to get one more shot via Thomas at the top of the box following a corner, but it missed and they went into halftime trailing 1-0.

“First half I kind of felt like we came out a little sluggish, a little heavy-legged for some reason,” Sandifer said. “We just weren’t moving the ball or moving our bodies at the speed that we normally do.”

Feeling like they hadn’t really done a good job of executing the gameplan they had coming into the match, Sandifer reminded them of what to look for and the Panthers took heed to the message.

Daviess County created multiple chances in the second half by earning nine corner kicks by the 75th minute, but was struggling to break through and find the back of the net.

The Panthers got a free kick in the 65th minute courtesy of Thomas, but the wall blocked the shot. In the 72nd minute Daviess County got its cleanest look as Higgs drew a free kick and freshman Jack Quisenberry nearly bent it in before it was headed out by Covington Catholic.

Three minutes later they earned one last free kick, but the shot was saved as the Colonels wrapped up the game and grabbed a 1-0 victory over the Panthers.

“Several times we got behind them on the wings and the cross just didn’t find its target,” Sandifer said. “We got several corner kicks in the second half and that’s one thing we thrive on is taking advantage of our corner kicks. We just didn’t execute them like we normally do.”

Sandifer said he was thrilled with his guys efforts, but it was Covington keeping the box so packed defensively that they didn’t have space to create many dangerous looks deep in the offensive third.

“They just got so many guys back quick enough that we just could not get good open looks,” Sandifer said. “Credit to them. They got that goal and kind of attacked with fewer numbers in the second half. They just sat in front of us the last 30-35 yards and made it very hard for us to do what we like to do.”

Despite the final score not being in their favor, Daviess County finished the season with its eighth straight District Championship and another Region Championship.

Owning a 22-2 record to close the season, Sandifer couldn’t be more thankful to have gotten to coach not only a talented group on the field, but a great group of players off the field as well.

“This was a fantastic group to coach,” Sandifer said. “I enjoyed going out there and working with them everyday. They were very coachable, they did what we asked them to do. I’m going to miss these seniors that we’re losing. They’re good soccer players, but more importantly they’re good kids and I’m going to miss them being around.”

With a number of underclassmen on the current roster, the Panthers will come back with plenty of reinforcements and look to work back towards returning to the state tournament and hopefully advancing to a state championship.

“They know the expectations are always the same,” Sandifer said. “And that’s to get up here and have a chance at a state title… These underclassmen have to work their tails off this offseason to give us a chance to get back here and maybe get one game further.”