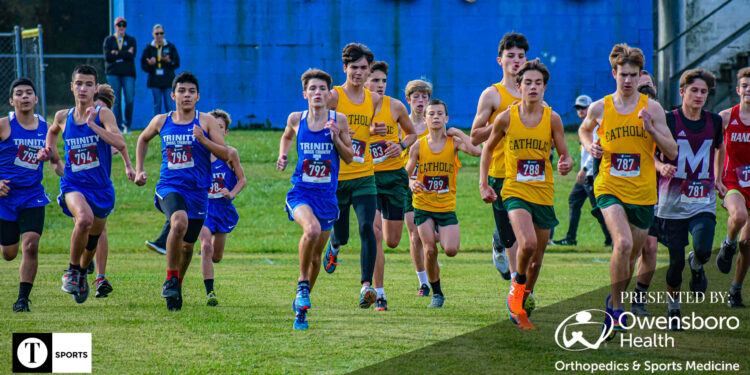 Owensboro Catholic boys cross country qualified for state with a top-five finish at the Region 2 Class A meet, while the Lady Aces had two runners qualify for state individually.

The girls meet opened up the day, as Owensboro Catholic had a strong day individually while Natalie Rhinerson was the lone competitor for the Lady Raiders.

Serving as the only representative for Trinity on the day, Rhinerson finished 50th overall with a time of 29:47.52.

The Lady Aces just missed the cut to qualify for state as a team, finishing with an average time of 24:38.07.

While Owensboro Catholic might not have qualified as a team, Reid and Sutter qualified individually as seventh graders.

“They both ran huge PRs…” Head Coach Rowan Jones said. “As a team we put together a good effort. We didn’t quite make it to state as a team, had a solid year and I’m just looking forward to taking those two individuals [to state].”

Jones expects them to go out and give it their all in Lexington next week, but is thrilled for the learning experience this will be for the duo and the program’s future.

With no seniors on the roster and three juniors, seeing this success from underclassmen is something that Jones is very excited about going forward.

Owensboro Catholic boys picked up where the girls left off in the second meet of the day, qualifying for state as a team while Trinity’s Jacob Howard qualified for state.

The Aces finished the day in fourth place overall, posting an average time of 19:49.24. Braden Davis led the way, finishing with a time of 18:50.55 to grab 11th individually.

Trinity placed eighth as a team, finishing with an average time of 21:15.86. Howard was the lone representative to qualify for state, posting a time of 18:58.07 to finish 12th individually.

After graduating a slew of players last year, Owensboro Catholic Head Coach Scott Lowe wasn’t sure if they would be able to make their way to state.

But as the pieces came together with players coming from all different backgrounds, Lowe was excited to see the team’s growth and how they finished with such high stakes on the line.

“I’m just happy,” Lowe said. “I looked at the rankings and I looked at everything else and said ‘we have a chance guys’, but they ran phenomenal today. It’s the best they have run this year… I’m on cloud nine… Not knowing if I was even going to have a team, to having a team and then not knowing if we were even going to qualify, to qualify, that’s just a whole [other] level of happiness.”

Marsh was one of those pieces, coming in from Florida recently. He built chemistry with his teammates and Lowe as the season progressed and then combined it with speed Lowe knew he had, helping him finish in the top-15.

Another interesting addition to the roster was Murphy, who finished 16th in the meet and just started running cross country this year for the first time in his athletic career.

Their No. 1 runner Davis is a longtime Ace and has been working with Lowe since middle school, but has been under the shadow of past runners that excelled at Owensboro Catholic. Lowe said that his potential showed through today and stepped out of the shadows to lead the Aces.

“This was a breakout race for him,” Lowe said. “When he came around and passed Austin up here coming to the finish I was like ‘there it is.’ That’s the guy I’ve been waiting for.”

With the state meet now the focus, this week Owensboro Catholic will grind in practice Monday through Wednesday, before using a little tradition to excite the team before competing in Lexington next weekend.

“Thursday, we have a tradition now that we play hide and seek at Moreland Park,” Lowe said. “That’s kind of their fun day. We’ll get two teams and one team goes and hides and they stay within the park. It’s a hide and seek tag basically.”