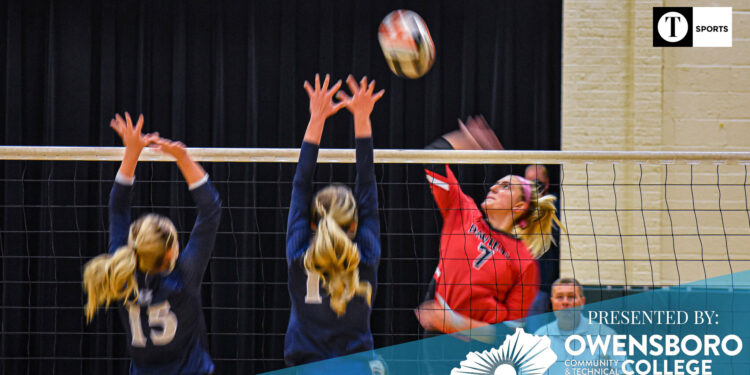 But the Lady Panthers bounced back quickly, using a 6-0 run to jump out to a 12-9 lead and force a Lady Eagles timeout.

Daviess County expanded its lead, later leading 20-13. The Lady Eagles then got two straight points and the Lady Panthers called a timeout to regroup.

However, Ohio County kept chipping away and used a 5-0 run to cut it to 23-22 before Daviess County took another timeout.

This time the Lady Panthers were able to recover, as a kill and a block from junior Josie Newcom secured the 25-23 win. Both teams traded points back and forth to start the second, knotted up at 5-5 early.

However, junior Emma Rogers came into serve and sparked a 4-0 run to go up 9-5, forcing an Ohio County timeout.

The Lady Panthers kept forcing the action out of the timeout, capping the run at 7-0 before the Lady Eagles scored to make it 12-6.

Ohio County tipped to chip at its deficit with an array of 2-0 runs, working its way back in it at 15-13 and forcing a Daviess County timeout.

The Lady Eagles were able to tie it at 15-15, but the Lady Panthers finally halted the run and grabbed a 16-15 lead

Ohio County immediately tied it, but a 4-0 run filled with kills from Newcom gave Daviess County a 20-16 lead. After a timeout the Lady Eagles came back roaring once again, tying things up at 23-23.

But clutch play including a nice block, followed by a good serve that was mishandled from junior Lexi Owen gave the Lady Panthers the 25-23 victory to go up 2-0.

Both teams battled point for point today start the third set, until Ohio County was able to take a 7-4 lead. Daviess County quickly responded though, using a 3-0 run to tie it at 7-7.

It seemed like the Lady Panthers were finding their groove up 12-10, but Ohio County came right back with a 4-0 run to take a 14-12 lead.

Ohio County worked its way back into things making it a 23-21 game and forcing a Daviess County timeout.

Down 24-21 the Lady Eagles nearly mounted a comeback by cutting it to 24-23, but a beautifully placed ball from Owen did the trick and secured a 25-23 third-set win to complete the sweep.

“It was just a good solid match,” Head Coach Tyla Bailey said. “I’m very pleased with the team effort and the energy that we had.”

It was a balanced attack offensively, as Newcom (8), junior Sydney DeRossitt (8) and junior Mary Grace Hill (6) combined for 22 of the team’s 30 kills. Owen set the team up all night per usual, rattling off 20 assists.

“Offensively just running tempo on a good pass and in transition was key,” Bailey said. “We’re doing a much better job of speeding it up a little bit and not giving the blocker enough time to get out there… It’s still kind of high, but we did limit the number of missed serves we had.”

This was a concern after posting 11 missed serves against Breckinridge County, but they were able to cut it to three against the Lady Eagles.

Another area of focus in their next match will be putting their opponent away, as the Lady Panthers built leads and let Ohio County work its way back into the game a number of times on Wednesday. Bailey said the fix is simple—being where they’re supposed to be.

“Just being in position,” Bailey said. “I know tonight it was kind of like we overshifted and over-rotated defensively. We did some really good things, but sometimes they caught us out of position so props to them.”

The win moves them to the finale of the 3rd Region Tournament, as Daviess County will take on Trinity (Whitesville) for the first time since their regular season opener.

Bailey has preached coming out with a lot of energy all season long and that hasn’t changed as Daviess County prepares to take on the Lady Raiders at 6 p.m. at Owensboro Catholic in the 3rd Region Championship.

“Volleyball is a game of momentum,” Bailey said. “So we just have to keep spirits high and do what we do best.”