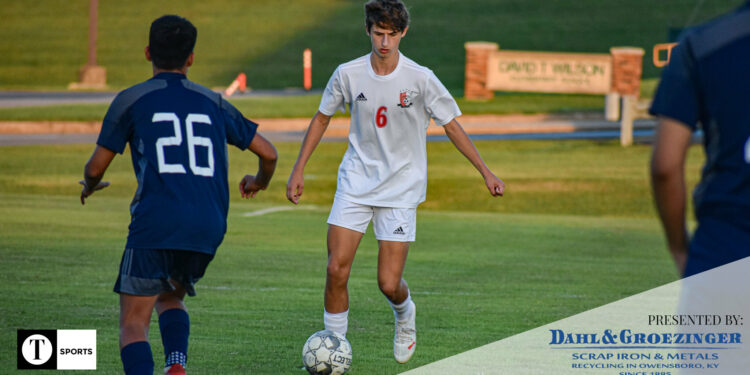 The Panthers have earned themselves a place in the 3rd Region Championship game, defeating Ohio County 3-1 thanks to a hat trick from senior Carson Thomas.

Daviess County came out of the gates firing, rattling off ten shots by the 24th minute. While they were just short on multiple occasions, the Panthers were able to find the back of the net in the 15th minute to take a 1-0 lead thanks to Thomas.

“Their coach was telling them to sit back and not pressure me so I was like ‘ok’,” Thomas said. “That was probably my fourth shot from them not pressuring me and it finally went in. After that they knew to step up.”

Daviess County continued to push the action, controlling possession all game long and ratting off shot after shot.

It seemed as though the Panthers would walk into halftime up 1-0, but a perfectly placed clearance found the feet of senior Levi Hepner with 45 seconds left in the half and he changed the game.

Hepner made a couple of moves and was able to bend it near post on the right side, sinking the first shot of the day for Ohio County to knot it up at 1-1 going into the second half.

The Panthers had chance after chance in the first half, but were unable to connect as Ohio County’s defense continued to thwart each shot.

Head Coach David Sandifer said it was what they were doing schematically on defense that made it so hard for them to find the back of the net.

“I guess with that crowded off of a box, I don’t know what else you could do besides just serve some dangerous balls in,” Sandfier said. “There’s not even room in there to combine. We did a better job in the second half I think of creating opportunities from our serves from out wide.”

Daviess County was aggressive once again in the second half, nearly taking the lead minutes into it.

A handball in the box gave them a penalty kick, which Anderson rifled but was saved by Ohio County’s sophomore keeper Will Young to keep it at 1-1 in the 44th minute.

Anderson nearly came through in the 54th minute, but his shot rang off the post and kept the game tied.

However, Daviess County took the lead less than a minute later as Andrew Alexander sent a beautiful cross into the box and Thomas sent it to the back of the net to make it 2-1.

The Panthers made opportunities time and time again offensively in the second half following the early goal, but couldn’t connect until they received a penalty kick on another handball.

It was Thomas who took it, sinking his third goal of the night to give them a 3-1 lead in the 71st minute.

This was all Daviess County needed, as they walked away with the win and a spot in the 3rd Region Championship.

The Panthers will be looking to defeat Apollo for the fourth time this season after defeating them in the 2nd District Championship when they face off in the 3rd Region Championship at 6:30 p.m. on Thursday.