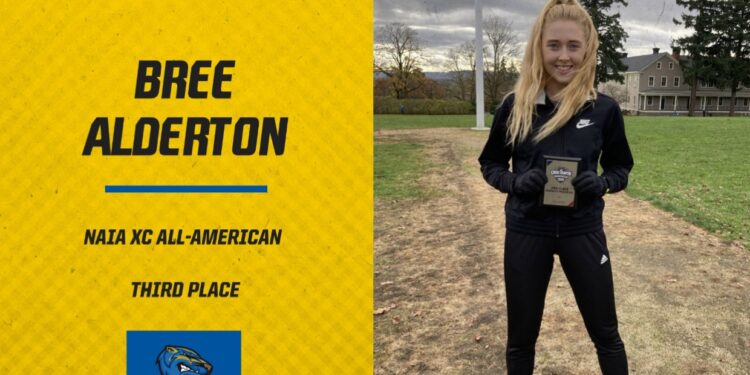 “Placing third in the nation after placing third at conference only two weeks ago is something I honestly didn’t imagine doing. After conference, I was just happy to make it to nationals. But God is good, and He had a plan all along. Going into today, I pushed aside every negative thought and focused on His goodness, and all the times He’s helped me. He allowed me to have my best race when it counted the most. Apart from Him I can do nothing, so today I ran for Him and prayed that my effort would bring Him glory. I’m glad I was able to do that today. I’m extremely thankful and still in shock. The support I’ve received from my teammates and coaches has been overwhelming, and I truly couldn’t imagine doing this without their encouragement. I’m proud to be a part of this program, and so excited for what’s to come,” said Alderton.

Bree progressively moved up throughout the race. 1000m into the race she was in 34th place and steadily moved up to fourth place by the 3000m mark. By the 4000m mark she had taken the lead, which she held on to until the final stretch. She placed third with an overall 5k time of 18:22 — just eight seconds behind the first place finisher.

“There are so many different things I could say about Bree’s race today. She ran smart, confident, and executed her race plan amazingly. Today was her reward for many years of smart and consistent training. Even after what she perceived as a disappointing conference meet two weeks ago, her belief never wavered. The support we have all felt this week from our team, professors, and the entire Bearcat family has been incredible. This was a special day for not only her, but our entire cross country and track program,” said Head Coach Mark Rowe.

Alderton was the highest placing finisher from the River States Conference, as well as from the state of Kentucky. She is the first female Brescia athlete to compete in the NAIA XC National Championship since Courtney Naas did in the 2015 season.

“Today was the perfect way for Bree to cap off a historic season. She won every regular season race she competed in and had a breakout performance today. She positioned herself as a contender for NAIA cross country/distance track events moving forward — anyone who didn’t know her name before today certainly does now,” said Assistant Coach Kyle Robinson.

Bree will take a short break and then move into the 2022 indoor track & field season.