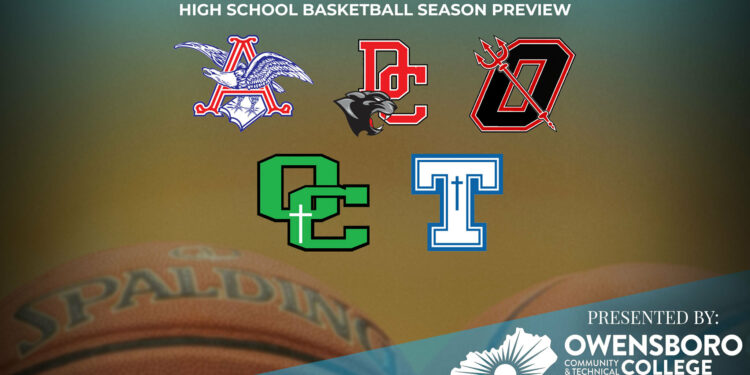 With the football season nearing its end and Thanksgiving week upon us, that means high school basketball is as well. With the season opening up on Nov. 29, here is a preview of the season ahead.

Boasting a roster filled with upperclassmen, Daviess County boy’s basketball is looking to bounce back for a solid 2021-22 campaign.

The Panthers are coming off of a 2020-21 season that was heavily affected by COVID-19, as they finished with a 5-14 overall record after a number of games were cancelled.

Their leader in ppg, rpg and spg in junior Cole Burch is returning, alongside junior guard Jack Payne who led the team in assists and three-point field goal percentage.

Hayden said that McCampbell is a 6’5 transfer that will play a big role with his size and athleticism, while Moss despite his youth will be able to make an immediate impact right away at the point guard position.

Coming into the 2021-22 season, Hayden knows that the Panthers will have a number of challenges to face. The first of them being able to create team chemistry.

“Blending new guys with returners [will be key],” Hayden said. “This team has three key players playing football and there will be an adjustment time as we blend this team together.”

Another big thing that Daviess County has focused on and wants to rectify from last season is finding a way to win close games.

Hayden said that they have to be able to value and capitalize on every possession in order to be successful in the regular season.

The Panthers are hoping to find success in the regular season in order to best prepare them to make a deep run in the 9th District Tournament when the postseason arrives.

Apollo is hoping to turn things around this season by continuing to gain valuable experience for a young Eagles roster.

Losing their top four scorers in Cameron Frantz, Landon Hamilton, Dan St. Claire and Harrison Bowman, Apollo has a lot of ground to make up offensively.

They have a few upperclassmen returning who the Eagles will look to for key minutes this year in senior Jaden Kelly, senior Alex Morphew and juniors Jaxon Hardin and Jaren Stites.

Head Coach Mark Starns expects Kelly to be a key cog for their team, especially in the leadership department. The same could be said for Morphew, who Starns describes as a high-energy guy for their squad.

Starns said that with a team that is so young, meshing together as a team as the season progresses will be crucial. The Eagles intend to be a team that prides itself on the defensive end with an in-your-face mentality in order to be successful.

Apollo’s roster has two seniors, but is mostly composed of juniors and sophomores. With such a young roster Starns hopes to see constant improvement from the Eagles night in and night out, aiming to compete at a high level in the 9th District and 3rd Region in postseason play.

The Red Devils come into the 2021-22 season looking to repeat its success with a district title while trying to find their way to a regional championship for the first time since 2018.

Owensboro is coming off a solid season in which they finished 12-6 overall while remaining 5-0 in district play.

They return three key starters in seniors Amari Wales, Cayman Powell, and Kenyatta Carbon. The trio have started every year of their high school careers. Carbon and Wales lead the way offensively, as they combined for 35 points a game last season.

Head Coach Rod Drake expects this group to gain some key contributions from a pair of newcomers, including sophomore Chris Glover and junior Talas Taylor.

After falling in the district championship to Owensboro Catholic last season, Owensboro made a postseason push that nearly placed them in the 3rd Region Championship before they fell to Muhlenberg County.

The Red Devils are focused on finding a way to the region championship in the 2021-22 campaign, as Drake said they must be cohesive defensively and in the battle of the boards every game.

With three key starters returning from last year’s roster, Owensboro Catholic boys basketball is looking to claw its way to a 3rd Region Championship in the 2021-2022 season.

The Aces are coming off an 18-10 season which ended when they fell to Muhlenberg County in the 3rd Region Championship. Their leading scorer in junior Brian Griffith is back after a season in which 22.6 ppg while shooting 35% from three.

Juniors Ji Webb and Parker Gray are some other key returners that Head Coach Tim Riley expects a lot of minutes out.

Riley also has a number of juniors to support a deep sophomore class that will contribute as well, as the growth of his underclassmen was key for Owensboro Catholic coming into this season. This will be especially key, as the Aces have lost two key defenders in Luke Scales and Gray Weaver.

All in all, Riley and the group feel like they’re poised for another 9th District Championship and hope to find themselves in the 3rd Region Championship once again.

After a rough season in 2020-21, Trinity (Whitesville) is looking to make a big splash in the third region with some experience and more size on their side.

The Raiders closed last season with an overall record of 6-17, as their season came to a close in the 12th District Playoffs against Grayson County.

This year Trinity returns its entire roster, looking to mesh with some newcomers for a strong season. Junior Landon Huff is expected to lead the charge this season, following a 2020-21 campaign in which he led the team in points (16.1 ppg) and rebounding (7.9 rpg).

“Prep Hoops currently has him ranked No. 71 in his class in KY,” Head Coach Nathan West said. “He is a tremendous athlete, particularly when slashing to the basket, and his length and athleticism make him a force defensively and when rebounding. I have said this numerous times, but Landon is the best offensive rebounder that I have ever coached.”

The Raiders second leading scorer in junior Denver Dickens (11.9 ppg) also returns, as West expects more from him offensively with his improved shooting. West also will count on Dickens to be a defensive anchor for Trinity, saying he is one of the best on-ball defenders in the third region.

Some key newcomers for the Raiders include junior Nolan Mills, senior Cole Hall and even a few freshmen in Hayden Aull and Conner Hatfield who West said are poised to be future stars.

After a season in which almost his entire roster was getting their first varsity action, West feels that they’ve taken that experience and it will help them grow this season after all of the work they have put in.

“Being composed of mostly sophomores last season, we took our lumps, but it was probably a necessary learning and growing process for us,” Huff said. “Simply having another year of experience will be huge for us. Specifically, though, we need to eliminate the plays in which we hurt ourselves: turnovers, missed free throws, no box-outs, not crashing, etc. That has been a major focus of our offseason, and the guys have responded well to it in practice, so I can’t wait to see what happens this season.”

West believes that they have the potential to be a top-five team in the 3rd Region, as they have a lot of depth at each position. Combine this with strong summers thanks to AAU basketball for a number of his athletes and West said that they can be a dark-horse candidate for a special season.

“For us to be successful, we must have an attack mentality at all times [on both offense and defense] and be the most physical team on the floor every night,” West said. “We have spent all summer and the early part of this season emphasizing hunting offensive advantages, controlling the glass both offensively and defensively, and applying pressure defense. We want to be relentless this year.”