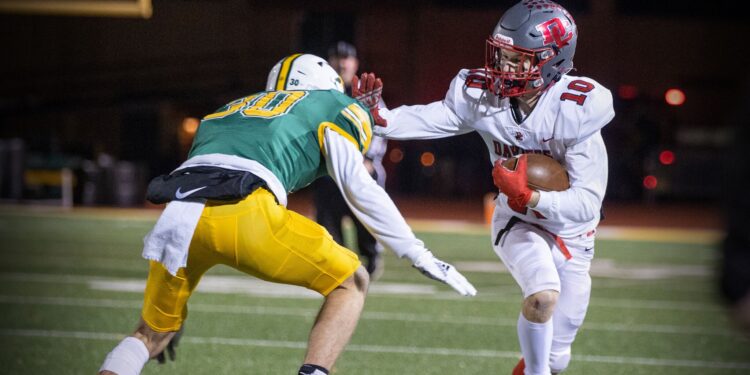 The Daviess County football program lost to St. Xavier on the road in the third round of the Class 6A 2021 UK Orthopaedics State Football Finals. The loss ended what is arguably one of the best seasons in Panther football history.

The Panthers (11-2, 7-1 6A) defense forced three turnovers and amassed some big plays but struggled to find any momentum. They fell victim to multiple red zone possessions plagued by penalties, while St. Xavier (12-1, 8-1) leaned on some explosive plays to jump to an early lead.

Head coach Matt Brannon encouraged his kids to reflect on the many triumphs that the season brought them.

“It’s tough to end a season with a disappointment, for sure, but we can’t forget the accomplishments we had,” he said. “These seniors have done so much for our program — they’ve laid an incredible foundation and set the bar high for our young kids, and they’ve done it with class.”

“They just love football, and they love being around each other, and that’s hard to recreate,” he said. “They love being at practice and playing the game; this entire team has been a pleasure to coach.”

The Tigers jumped out to an early lead when senior quarterback Jack Sivori found Michael Duddy across the middle in the endzone. They paired that with an option that Sivori kept and took 22-yards for a touchdown to make it 14-0 with 11:53 left in the half.

The Panthers sandwiched two forced fumbles between the scores, giving themselves quality field possession late in the first, but failing to score. All-state quarterback Joe Humphreys was forced out of the pocket for most of the first half, managing to convert only 15 first downs in the first half.

The Tigers’ third touchdown of the evening came when Sivori kept an option and took it six yards for a touchdown.

Daviess County pieced together a solid possession midway through the second quarter, with Humphreys primarily staying on the ground to march the Panthers to the red zone for the first time. The drive resulted in a Tiger interception on the goal line.

St. X responded swiftly when Sivori connected with Duddy on a go-route that he took 99-yards for a touchdown. That score made it 28-0 in favor of the Tigers, with 4:27 remaining in the half.

The Panthers countered by piecing together a solid drive, capping off plagued red zone possession with a Humphreys to Max Dees touchdown in the corner of the endzone. The score trimmed the deficit to 28-6, entering halftime.

In the second half, the Tigers kept their foot on the accelerator as Mekhi Smith reeled off a 60-yard touchdown run a mere 19 seconds into the frame. The Tigers looked to force a running clock on a 60-yard punt return, but it was called off because of holding.

An injury to Humphreys brought Jack Ball in as quarterback for the Panthers; they managed to piece together some big plays but struggled to get anything going. Sevori found Adam Boone 26 yards downfield for a touchdown to give the Tigers a 42-6 lead entering the final frame and the eventual victory.

Brannon struggled to pin the loss to any specific facet of the game and credited the Tigers with a “solid” game plan. He also credited his quarterback for quality gameplay and a distinguished year.

“They did a great job of disguising their coverages. They were quick to their zones and came at us with a speed that we aren’t accustomed to seeing,” he said. “When he (Humphreys) was in there, he played an incredible half and gave us as much as he could with his feet. We were saddened to pull him, but he has an illustrious career ahead of him.”

Home » Sports » Daviess County falls to St. Xavier in third round of playoffs