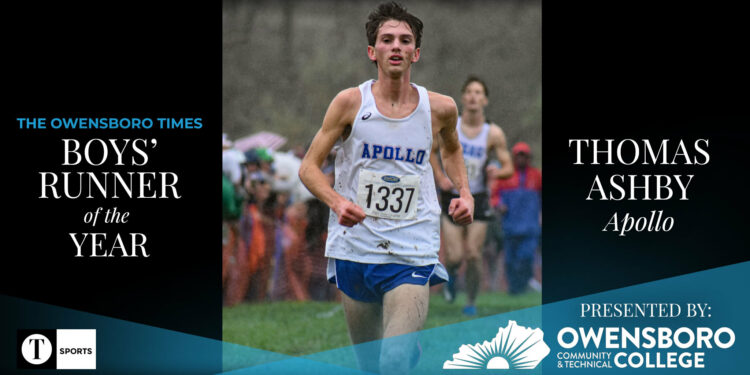 “It means a lot [to win the award],” Ashby said. “I’m really thankful for it. I’m glad when cross country gets some recognition.”

Ashby had success all season long, but thrived late in the season by grabbing first individually with a time of 15:40.91 to help the Eagles finish with a time of 16:55.28 to win the Region 1 Class AAA Meet.

The Apollo standout expanded on his success at the Cross Country 3A Championships, helping Apollo finish ninth as a team by finishing second individually with a time of 16:36.04.

Ashby said he felt very good about performance this season, making huge jumps while almost winning a state title—something he set out for when the season began.

‘My biggest goal was to set awesome times and contend for a state title,” Ashby said. “The closer I got to state, the slimmer my chances seemed for me to actually finish really high but it all worked out and I did well.”

Ashby said that the 2021 season with the Eagles will always be one that he remembers because of what he accomplished with his teammates.

“I will definitely remember the Apollo boys winning a Regional Championship the most,” Ashby said. “At the beginning of the season, we had absolutely no chance but as the season progressed, we got better and better. We realized that it was actually possible a couple weeks out of the big race and went and beat everyone as underdogs on race day.”

The Eagles No. 1 runner credits his success this season to the countless hours of training as well as his parents, coaches and teammates.

“Definitely my parents and coaches,” Ashby said. “My parents do everything they can to support me while Coach Shoulta and Coach Southard work very hard to train us. I’m thankful for them. I think my training has also got me here. Running hard everyday develops a really bulletproof mindset that helps during races.”