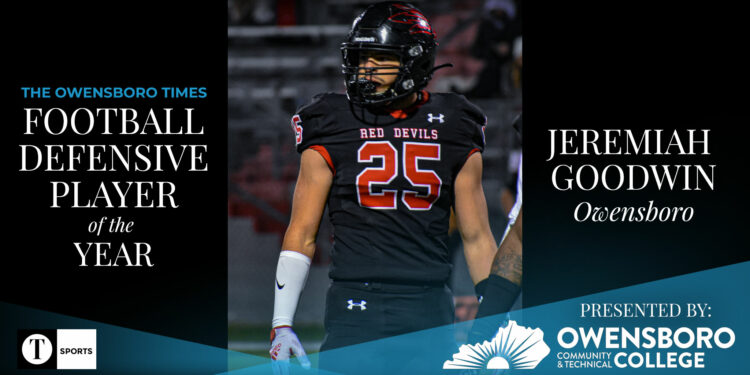 Proving to be a threat on both sides of the ball, Owensboro junior Jeremiah Goodwin has set himself apart with his defense thus earning The Owensboro Times 2021 Defensive Player of the Year.

Goodwin said he was speechless and thrilled to receive the honor in an area with so many talented players defensively.

Goodwin has been a constant threat for Owensboro, recording 49 tackles on the year while playing both offense and defense every game.

Of those 49 tackles, a team-leading 17 were for a loss. Goodwin has also made it hard for offensive lines and quarterbacks all year long, recording a team-leading 12 sacks for the Red Devils.

“I’ve played significantly better than last year,” Goodwin said. “I’ve been making plays on the defensive side and helping our team win.”

The junior has taken a major jump in his game defensively, after just being introduced to that side of the ball last year. He credits more time with the position and great conditioning off the field to that leap in production.

“Experience in the position and my strength [have helped me a lot],” Goodwin said. “Experience most of all because last year they just threw me in there first game and I didn’t know what to do. This year I had an idea of what I needed to do and I got it done.”

Goodwin said that his ability to expand on his moves as a defender has also been a crucial factor in his success.

“The ability to add a pass rush to my moves,” Goodwin said. “Just working hard in practice everyday [has been key too].”

Goodwin also thanked his coaching staff for helping him earn this accolade, saying that he couldn’t have done it without them teaching and pushing him.