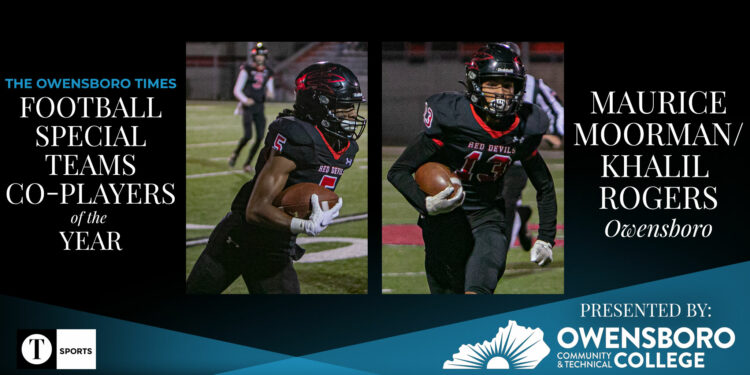 After terrorizing defense on kickoff and punt returns all season long, Owensboro’s junior Khalil Rogers and senior Maurice Moorman have been deemed The Owensboro Times 2021 Special Teams Co-Players of the Year.

The two are excited to earn the title, as they’ve both spent countless hours in practice to make them the best they can for special teams.

Rogers said he’s been practicing hard in order to make himself a threat on returns and it’s shown this season.

“I’ve just [been] finding the hole and hitting it hard, catching the ball in the air and just running fast,” Rogers said.

Knowing that they can change the game at any given moment with one return is huge and Rogers loves being able to provide that spark for his team.

“It feels good because we change the momentums of the game a lot,” Rogers said. “It gets our team pumped up and then hopefully we get the drive in and score too.”

The special teams duo has helped Owensboro get out to an 12-1 overall record, as they are preparing for a trip to Lexington to take on Frederick Douglass High School.

Thanking their teammates and coaches for helping them grow as players, they are focused on this week’s matchup and accomplishing their goal of winning a state championship.