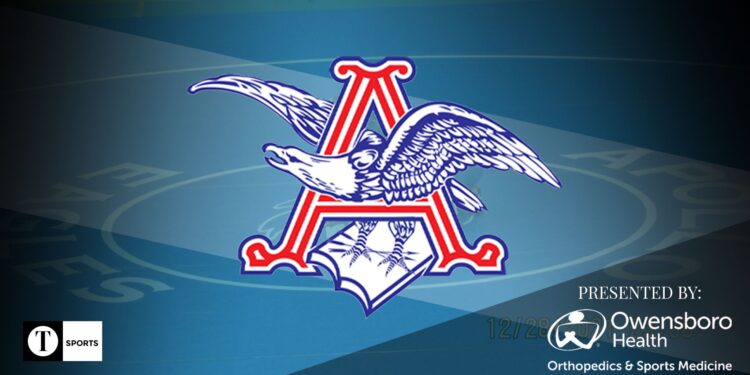 Trailblazing for the sport in the area, Apollo has created a full girls wrestling team and is hoping to make it official within the next year.

Head Coach Courtney Johns took over the program recently, having girls each year. Only having four of the five return from last year, he is extremely pleased with the ability to have grown in such a short time.

“That is something that we are really proud of right now,” Johns said. “That is one of the hardest things with recruiting… I reached out to soccer and the soccer coach actually loved the idea, so I got a couple soccer girls and I recruited throughout the school. The girls are picking up on it and they actually love it.”

Johns made it known that there are some schools with girls wrestlers—Daviess County being one—but they are the first in the area to have a full group.

“We’re the first in this area to actually put together a team,” Johns said. “Even though it’s not sanctioned, our AD has been actually supportive of it.”

With support from the athletic department, this led to the team being able to compete in multiple tournaments—both being all girls tournaments—finished third and seventh in both, competing in fields of 18 teams.

Erin Faulkner has been a huge fan of the program since joining earlier this year, saying it is helping her grow in other sports while making her feel like a part of a team.

“I’m a weightlifter, so having another sport that uses raw power is really cool,” Faulkner said. “And I noticed that they were very inclusive. Like my partner, he’s a guy and he’s very supportive and very nice. Everybody is wanting to help us really learn how to do it. It’s a very supportive community.”

Paisley Jen was one of the first girls to join the program in hopes of building it into what it has become today after competing in other sports as well.

“I did Brazilian jiu-jitsu for like seven years maybe and I noticed that the girls wrestling program didn’t have very many girls,” Jen said. “So I thought it would be cool for me to kind of just grow that sport.”

Johns said he thinks with the current roster they could compete for a top-five finish in the state right now, but believe they could go even farther in the future.

Johns emphasized the want to grow and also recognized that being involved with the program as a coach and a student is something to be proud of far into the future.

“I would like to see us grow,” Johns said. “Like I said, we’re the first in this area to have an all-girls team and I’m proud of that and our girls are proud of that. Even if it doesn’t get sanctioned, they’ll graduate from Apollo knowing they were a part of something new, something different.”

Johns said in order for more people to be put on notice when it comes to girls wrestling it comes down to schools and coaches realizing just how beneficial it is for not just some students, but all student-athletes across several athletic programs.

“[There needs to be] more awareness of it,” Johns said. “I think more coaches need to understand or see the benefit of it as far as building strength, building quickness, building their core up and building their footwork up. This is one sport that helps every sport.”

Noting earlier that it does help her grow within weightlifting Faulkner said that everyone can benefit from the sport not only physically, but mentally as well. Faulkner feels as though if more people understand this, girls wrestling numbers will skyrocket in the area.

“I would say it’s a very worthwhile sport in and of itself,” Faulkner said. “The people in there, the athletes and the coaches are just pushing the kids to new limits. The lessons that you learn there are also not just for wrestling, they’re also for life. They teach you hard work, teamwork, how to support each other and it’s really like a family.”