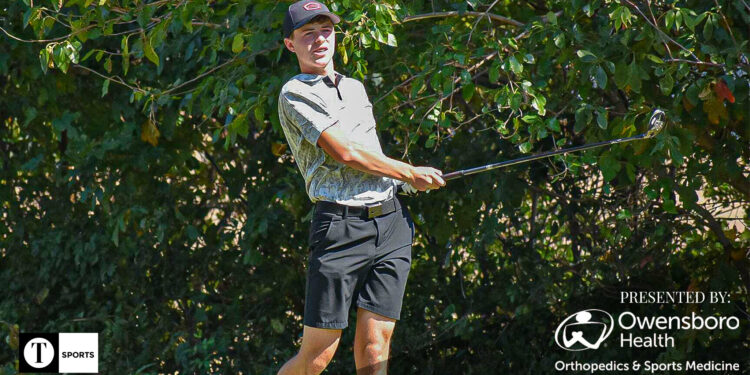 In the KHSAA’s most recent Board of Control Meeting on Wednesday, a new postseason format was set for golf.

This new format expands the amount of golfers that will get to compete following regional play.

After regionals, a round known as the ‘State First Round’ will commence at three separate locations.

Thirty golfers will then advance to the State Final Round Tournament from each site, making a total of 90 golfers competing.

Daviess County boys golf Head Coach Lars King thinks that new format has some pros and cons to it. One of the major pros being that more kids can qualify, but the one con being that it will make it tougher on smaller schools as a team.

“It’s a good promotion for the kids,” King said. “It’s kind of going to promote more participation in a second state event which is good, but I also think it’s one of those things where it’s a power move for those bigger schools in Louisville to try and get another team in there.”

Owensboro Catholic Head Coach Bretnea Thomas agreed with the sentiment, stating that players will now have to work harder than ever to reach the highest level of competition.

“This undoubtedly changes the post season,” Thomas said. “While we will accept whatever changes the state makes and do our best to perform at the end of the season, it does add pressure to players to focus their efforts on reaching the State level. For many, simply making it to state is seen as a huge accomplishment and many appreciate that competing at Bowling Green Country Club is something not afforded to everyone. Now, that feat will be more difficult and athletes will need to not only work on their games, but their mental toughness to compete through two major competitions at the end of the season.”

Scheduling is another concern of King’s, as the timetables that they have discussed makes the season schedule a little tighter and it could be challenged by bad weather.

“The question mark in my mind is just scheduling-wise,” King said. “They talked about adding another week to the end of the season, which you bring in bad weather [as a factor]. Or they talked about starting it a week earlier which cuts your summer golf a bit.”

On the other hand, Thomas believes that starting the season earlier could prove to be very beneficial for more flexible schedules.

“As of now, students cannot get out of school for various tournaments, which leaves us to playing every Saturday and often missing out on larger competitions that are in the first week of August, when we start school,” Thomas said. “Moving the competition season up one week allows for flexibility in the tournament schedule, but it does dip into potential family vacations ending, summer golf tours, etc. However, because the season is supposed to start 7/15, many families plan for their child at least being at practice by that point.”

The decision has been questioned by some coaches including King, as he was aware it might happen but there was little discussion about the actual proposal itself.

“It was a hasty decision,” King said. “I will say that. I know they didn’t get any input from coaches around here that I know of.”